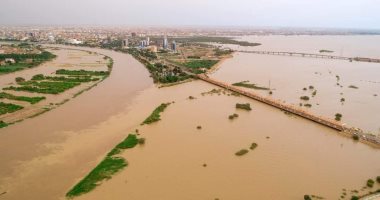 At the moment, when the heat of discussions and disagreements about the Renaissance Dam have reached their climax, the river erupted, and it seemed to express its anger at the bickering and squabbling around it.

The Nile flooded, as if calling its people to solidarity and to restore the spirit that used to gather all the inhabitants of the villages to erect barricades and guard homes and farms from the water. The Nile River is witnessing for the first time a significant rise in the water level that has not been exposed for more than a century, which led to floods in Sudan three weeks ago, as the average water level in the Blue Nile reached 17.43, which is the highest since the country began recording this data in 1912, according to Sudanese estimates.

This comes at a time when the Egyptian Ministry of Irrigation described the reality of the flood season and floods as “the worst is yet to come,” before announcing maximum preparations from the High Dam in southern Egypt to the mouth of the Nile River in Damietta and Rosetta on the Mediterranean Sea. This is the biggest flood from the river in nearly a century, as the wrath of the Nile destroyed homes and fields in Sudan and caused dozens of deaths.

The waters of the Nile have already flooded dozens of acres on the banks of the Nile River during the past days, in several Delta governorates (north of Cairo), such as the Beheira Governorate, which are flatlands not elevated above sea level, amid fears of the possibility of sinking towns and cities in the Delta and Upper Egypt.

According to the Egyptian Ministry of Irrigation, the flood season of the Nile River began last August and lasted for three months, indicating that the flood season is about to start in conjunction with the winter months, as the rainfall increases in some places for several days. There are real fears among citizens and on social media that large parts of Egypt will be drowned. On September 5, the Sudanese Defence and Security Council declared a state of emergency throughout the country for three months, to cope with torrents and floods, and considered it a “natural disaster area.”

Egypt and Sudan are two countries downstream of the Nile River, and the latter faced a crisis due to the floods and torrents that began since last June and left at least 130 people dead, according to Sudanese Interior Ministry data. Faced with this, Egypt directed the governorates overlooking the Damietta and Rosetta branches to evacuate the low-lying areas from illegal buildings, livestock pens, and others, as they are in danger of being submerged with water due to the high level of the Nile water.

For his part, the expert on water and dams, Muhammad Hafez, warned of the effects of the floods, without ruling out that the areas near the two banks of the river will be significantly affected, saying: “The adjacent and low-lying areas will be flooded with water and crops.” And he considered that talking about its containment “is premature and very early.” He explained that “the assessment of the effects caused by the flood is not known until the moment, and the losses will be determined at the end of next October, that is, after the end of the flood season.” He predicted that the places most affected would be “the Nile fish farms and the Nile’s coastal lands.” And he warned that it would threaten the foundations of simple homes if the water rose by 1.2 metres, due to the rise in the water table.

Egypt has witnessed several floods throughout its history, but historians assert that the flood in 1887 AD was one of the most vital floods that Egypt saw at the end of the ninth century. At that time, Egypt’s water revenue reached about 150 billion cubic metres from the Ethiopian plateau. Legend says that the cause of the Nile flooding every year is nothing but Isis’ tears, mourning her husband Osiris’ death in the ancient Pharaonic civilisation.

The Nile’s flood was broadly significant to Egyptian civilisation, as the floodwaters were the primary source of agriculture in Egypt. The Nile flowed from south to north, where the Delta is, and empties into the Mediterranean, and in the ancient Egyptian culture, the Nile flood was their gateway to the unknown world. The river overflows every year, carrying silt-filled water, and when the water recedes, silt accumulates on the banks of the river, fertilising the lands, thus helping crops grow. When the river overflowed with large quantities of water, dams were built to protect villages. If the Nile witnessed a small flood or the absence of the flood, that meant the loss of fertility of the agricultural lands. On completion of the Aswan High Dam’s construction in 1970, the flood was caught behind the dam near Sudan’s borders.