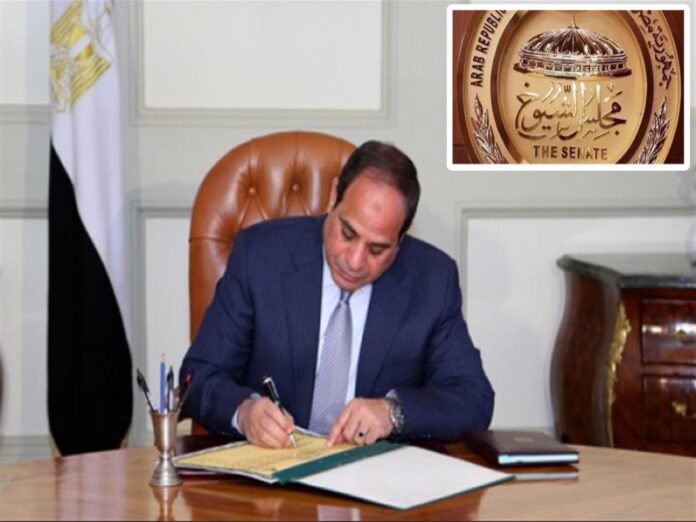 The announcement of the people appointed by Abdel Fattah al-Sisi to the senate, whose elections ended last month, has sparked resentment and anger among observers. Immediately after the names were announced, a hashtag “Al-Sisi’s Parliament, not the people,” was trending on Twitter under which people posted their intention to boycott the elections for the House of Representatives.

Local media reported the names of 100 members appointed by al-Sisi to the senate and included the names of media professionals, artists, army, and police officers close to the regime. The senate consists of 300 members; two-thirds of its members are elected by the list and individual systems, while the president appoints the remaining third, provided that its term of membership is five years. Last month, the senate elections were boycotted by Egyptians following a call made by the opposition.

According to official data, the number of participants in the vote reached about 8 million citizens, while 54 million boycotted the elections. Before al-Sisi was appointed to a hundred members, his regime controlled the other two-thirds, as the Nation’s Future Party (NFP) list won by acclamation without a competitor, taking advantage of the closed list system, which makes it difficult to compete for the list of power. According to observers, the security services controlled the individual and lists’ candidates and allowed only those who had the authorities’ approval to succeed.

The tweets commenting on the senate appointments mocked the state of political life in Egypt, considering that al-Sisi is buying the loyalty of newspaper editors-in-chief and trade union officials by appointing them to the council. Al-Sisi also appointed some media professionals loyal to him and granted them parliamentary immunity from prosecution, as well as some presumed opposition party leaders.

Samira Abdel Aziz’s statement that she was astonished at her appointment in the senate and that she did not have any political relations was met with widespread reaction and ridicule. Activists commented that al-Sisi’s regime had nothing to do with politics.

Social media commenters asked about the importance of the senate, which costs the state treasury vast sums of money at a time when Egypt suffers from an economic crisis, a rise in prices, and an increase in poverty rates. Judicial sources in the National Elections Authority revealed that the budget for holding the senate elections in their first and run-off rounds exceeds EGP 2 billion ($125 million).

Others called for a boycott of the House of Representatives elections that will take place early next month. Calls to boycott and abstain from voting came amid statements that the House of Representatives seats are being bought for millions of pounds. The accusations of buying parliament seats were not only made by the opposition but also issued by affiliates of the regime, such as Mortada Mansour, head of Zamalek Club, a current member of parliament.

The National List, which will run in the elections, led by the NFP, sparked a wave of splits among regime loyalists, amid accusations that the National Security and the intelligence services had interfered in choosing the names. Lawyer Tariq Jamil was arrested and detained for several days for criticising what is happening in the House of Representatives elections, in addition to what the former military spokesman wrote in an article that was deleted after it was published.

Reasons for the boycott

Those who were angry at the senate appointments and elections touched on the role of the outgoing House of Representatives as it passed all the laws submitted by the government that harmed the people’s interests. Activists considered that the House of Representatives would be chased by the shame of agreeing to all international agreements, including ceding the strategic islands of Tiran and Sanafir to Saudi Arabia.

It is noteworthy that after abolishing the Shura Council, which existed in the days of the late President Hosni Mubarak as the second chamber of parliament, the al-Sisi regime restored the senate’s role through constitutional amendments last year. The amendments also allowed the extension of al-Sisi’s second term in office to six years, and to run for a new term, which would allow him to remain in power until 2030. The senate is the new name for the Shura Council, which was abolished after the 2013 military coup led by al-Sisi, which overthrew the elected president, Mohamed Morsi.

Human rights allegations haunt al-Sisi on his visit to France