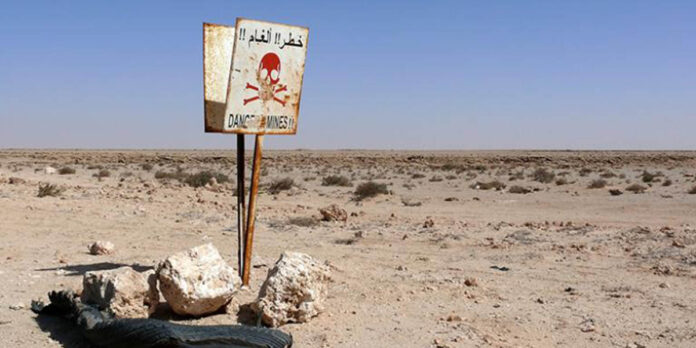 They waited for several months, hoping that they would return to their villages and homes after the displacement. The wait was long, the anxiety increased, and when they returned, they were surprised by the extent of the destruction and mines that claimed the lives of some and injured others. The people of Bir al-Abed in North Sinai were displaced from their homes last July, on the army’s orders, which wanted to evacuate their villages to confront militants affiliated with ISIS.

In the aftermath of a violent armed attack on an Egyptian army camp, the army has tried, over the past two months, to take control of the villages through the mobilisation of huge military forces and air strikes on the villages. The army managed to regain large parts of the villages, but at the same time it refused to return the displaced to their homes, despite waiting in the hope of return. Anxiety seeped into the hearts of the displaced people, and they feared the fate of their neighbours in the neighbouring cities of North Sinai, who were displaced from Rafah, Sheikh Zuweid, and al-Arish and did not return to their homes, nor were they compensated.

Damage and losses in buildings and agricultural lands were not the only shocks, as the joy to return to homes after they were displaced faded among the remains of the victims from the people who died from mines.

Since their return last Saturday, the death toll from the displaced has risen to eight, including children and women, and other injuries resulting from landmines exploding among citizens returning to their homes. Tribal sources said that a landmine exploded in a group of citizens in the village of Qatiya, killing and wounding several Eid Abu Harb family members, and transporting them to Bir al-Abd Central Hospital. Since February 2018, joint army and police forces have launched an expanded military operation, Operation Sinai 2018, to eliminate the militants without successfully extending their control over the Sinai Peninsula.

The story of the forced displacement of Sinai people from their homes began in 2014 and continues today after the army began to establish a buffer zone in Rafah, adjacent to the Palestinian Gaza Strip. At that time, army leaders met with Sinai sheikhs and told them that the buffer zone was to eliminate the tunnels to preserve Egypt’s borders and that they needed to evacuate one kilometre along the border strip with Gaza. The surprise is that the buffer zone extended to a depth of five kilometres, which resulted in the displacement of tens of thousands of residents of Rafah and Sheikh Zuweid and their villages and removing their homes and farms. The matter did not stop at that. Rather, the second phase of the displacement of the people of Sinai began, claiming to secure the compound of al-Arish Airport, and then the third phase last year under the pretext of developing and expanding the port of al-Arish.

The republican decision issued by al-Sisi to develop and expand the port of al-Arish included annexing the 371-acre lands surrounding the port and displacing its residents. Forcible displacement continued after the implementation of Republican Decree No. 233 of 2016 into effect at the end of last year, which required the expropriation of two kilometres along the international road to benefit the armed forces. The decision leads to the evacuation of homes and villages located along the international road, which crosses 400 thousand acres of al-Arish and the villages and cities within its scope, which ultimately means the demise of these villages from the map.

Activists from Sinai saw that this comes within the state’s plan to wipe out the existence of the city of Arish, the city of Bir al-Abed, and what remains of the city of Sheikh Zuweid, to displace more than 80 per cent of Sinai’s people. It is noteworthy that the Egyptian Constitution stipulates the prohibition of arbitrary forced displacement of citizens in all its forms, and violating this is a crime that is not subject to a statute of limitations. Amid the calls of the citizens of Sinai, who are spreading video clips of their homes being blown up after they evacuated them and razing their plantations of palms, olives, and figs that Sinai is famous for, the al-Sisi regime continues to fight them.

Citizens and activists in Sinai also talked about tiny amounts that the government paid as compensation for the demolition of their homes and the loss of their dreams in the land in which they lived and grew up. During a conference of the armed forces last year, al-Sisi refused to use the term displacement of people in North Sinai. Al-Sisi claimed that the army and the authorities did not deport anyone from that area, and only evacuated some homes and farms, and paid compensation to their owners.