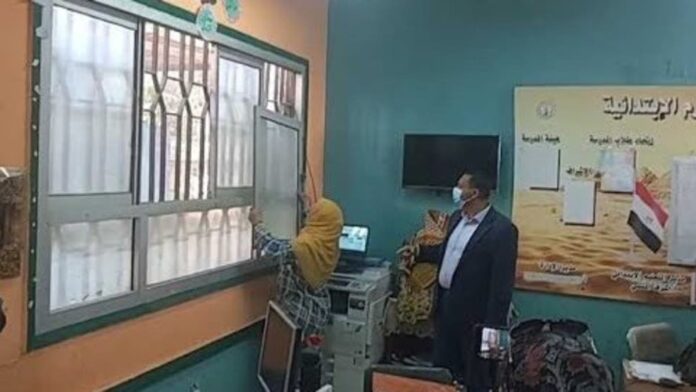 With the start of the new school year in Egyptian schools, many problems and complaints have surfaced, which are actually repeated every year, but have increased due to the spread of coronavirus. Pictures and video clips circulating showed chaos and overcrowding in front of schools and inside classrooms, and a lack of commitment to social distancing measures despite repeated warnings. In the first days of school, the remarkable event was a video clip of the governor of Dakahlia insulting the principal of a primary school in front of teachers and cameras and announcing her dismissal from her post, which sparked widespread anger.

Hundreds of parents flocked to their children’s schools. They spread out on the roads and pavements in front of the school gates, violating the precautionary measures imposed to avoid infection with corona. Inside schools, despite the reduction in the number of students and the rotation in attendance, crowding prevailed state in schools, and pictures showed more than one student sitting on one seat. Parents and students complained that many schools were not prepared to receive them. Maintenance and cleaning work for many educational buildings had not taken place despite the delay to the start of the school year so it could be done. The start of the school year was postponed for a full month, as it begins in the second half of September each year, and the Ministry of Education announced that this is to sterilise the buildings.

The Ministry of Education announced the distribution of students’ attendance in groups during the week to reduce students’ density in the classroom and replace that with studying online. The schools’ poor condition and the fact that they were not ready despite the delay, the severe overcrowding and the density of classes, despite the division of attendance numbers, raised concerns among parents. Before the start of the school year, parents mocked the Ministry of Education’s announcement of online studies, as there were a number of problems with the electronic exams. Surprisingly, the Minister of Education, Tarek Shawki, held a press conference to show the electronic platform through which students will study remotely, but the operating system faltered and the platform stopped working.

Great anger and resentment swept social media sites after a video clip spread widely on social media and news websites. A school principal was insulted and bullied by the governor of Dakahlia while he was inspecting the school. The governor forced the principal of Omar Makram Elementary School in Dikirnis, Dakahlia, to remove a window to clean it, accusing her of negligence at work, despite her and several teachers’ assertions that there are no cleaners in the school. The governor of Dakahlia refused to listen to the school principal or the teachers and told the school principal in front of everyone, “You are a failure.” The teachers told the governor that the school needs cleaners. Teachers clean the toilets themselves, but he directed his speech to the principal and asked her: “How do you clean your house?”

Activists confirmed that what the governor did is an insult to the masses of teachers and sends a bad message to students over how to deal with their teachers. They criticised the governor’s bullying against the school principal and his threat to teachers. The governor announced to the audience the school principal’s dismissal and threatened the teachers by saying, “I am ready to dispense with all of you.” Tweeters rejected the governor’s method and considered that he insults teachers in front of the cameras because he does not do his own work. His governorate’s streets, including the city of Mansoura, are full of rubbish whilst the services are poor.

State schools suffer from a shortage of teachers, staff, and cleaning workers, in addition to the deterioration of the infrastructure of the buildings themselves and the overcrowding of classrooms for students who cannot find seats. For her part, Karima Mahmoud Ibrahim, principal of Dekernes Primary School, commented on the incident, saying, “The governor insulted me without allowing me to speak and explain to him what is happening.” “The school does not have cleaners, and we hire workers at our expense, and the teachers clean the school themselves, and we have painted four floors of the school,” she cried in a press interview. She added: “I am an Arabic language teacher and educator of generations, and I previously obtained a certificate of appreciation from the Minister of Education, and the former governor honoured me, and I did not expect to be treated by a governor this way. I wonder how I will face my students and colleagues after they saw me being insulted this way.”

It is noteworthy that a similar incident occurred in 2015 with the Governor of Alexandria, Souad el-Khouly, who insulted a teacher in the classroom in front of students and attendees. A few months later, el-Khouly was imprisoned for ten years for financial and administrative corruption.