EgyptWatch
Home Reports The homeless in Egypt: Tragic conditions in the streets, cemeteries, and under...
Facebook
Twitter
WhatsApp 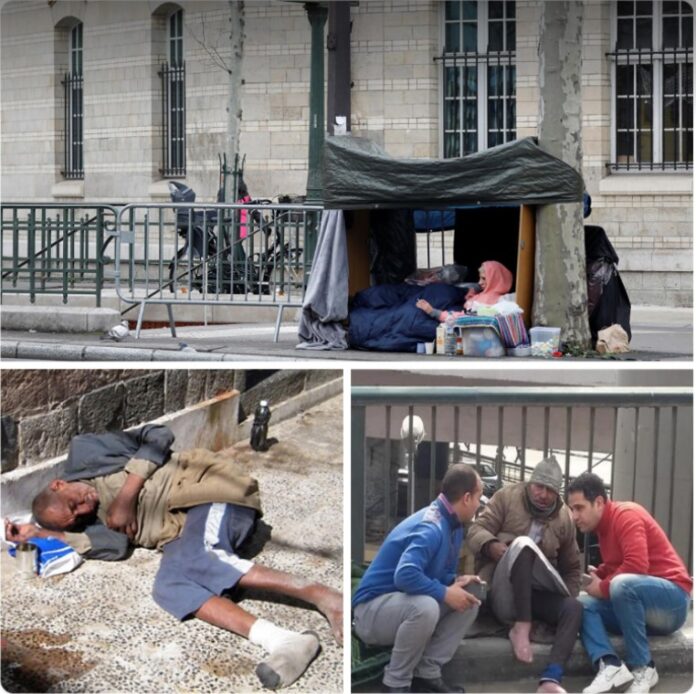 With the approaching winter season, the crisis of the homeless in the streets of Egypt is being exacerbated, as they find themselves in the open and freezing cold without any help or aid. A few days ago, pictures spread on social networking sites that caused an uproar and controversy, showing an entire family sleeping on the pavements in Cairo and sleeping in the open without shelter or cover. After the uproar caused by the pictures about this family’s tragic situation, the Ministry of Social Solidarity announced that it searched for this family to provide assistance to it, but did not find it.

Unofficial statistics indicate that the number of homeless people in Egypt has reached two million, who cannot find shelter or housing, while calls to shelter them have been renewed, especially with the advent of winter. In the absence of officials and human rights associations, homeless people are in public streets, in front of cinemas, and in deserted places. By adding the numbers of people living in shanty towns, cemeteries, and informal settlements to the number of homeless people, at least 12 million Egyptians share cold, hunger and panic, and live in tragic conditions. According to a study prepared by the Egyptian Centre for the Right to Housing, 15.5 million people live in slums (more than three million families). In contrast, there are 5.8 million vacant housing units.

The homeless in Egypt

By a simple tour through Cairo’s streets, especially at night and after the traffic, you can notice numbers of citizens and children in dirty clothes sleeping at night under the bridges and in front of the garages and shops. Most homeless and cemetery dwellers suffer most from kidnapping, indiscriminate theft, and rape, which can affect any one of them due to their constant presence in the open. The environment for the displaced is fertile for the production of problems, crimes, and all that threatens societal security, at a time when the government is busy building a new capital in the hundreds of billions and neglects to save these tragic cases.

For her part, Somaiia al-Alfi, director of the street children unit at the National Council for Childhood and Motherhood, said that the phenomenon of homeless people on the streets has four main causes, the first of which is poverty. She explained that the poor economic situation of most of the children’s parents and the fact that most of them belong to poor and illiterate families exacerbates this phenomenon. Among the causes of homelessness are family disintegration and separation and neglect, absence of role models in the home, severe cruelty, and domestic violence. Al-Alfi added that the educational system that expels children who have learning difficulties or have psychological or social problems enhances the phenomenon of homelessness.

According to official statistics, the number of informal settlements in Egypt is 1,221 areas outside the state’s planning. Most of the residents of Upper Egypt are from extremely low-income families. The last official statistics on the population of cemeteries in Egypt, issued in November 2017 by the Central Agency for Mobilisation and Statistics, revealed that 5 million citizens live in cemeteries in 25 governorates. The statistics agency stated that the population of cemeteries in the Greater Cairo region – which includes the governorates of Cairo, Giza, and Qalyubia – reached 1.6 million in the last ten years.

Amidst this painful reality, the winter cold creeps up every year as the most significant challenge and suffering for those large numbers of citizens who live without shelter and no attention from a country that builds new cities for the wealthy only. The danger increases in the winter, especially when a wave of frost or rain strikes and severe floods, such as the one that occurred last year, caused the deaths of some homeless people, whose pictures were shared by everyone.

For his part, Samir Abdel Fattah, a professor of social psychology at Ain Shams University, warned in a press statement about the revolution of hungry people in Egypt due to the poor’s miserable conditions, including the homeless and cemetery residents. He pointed out that neglecting to deal with the demands of the homeless and their marginalisation would represent a time bomb that explodes in society, saying: “The revolution will take place and the poor will take revenge on the rich and the government that allowed them to do so.”

In previous press statements, Ghada Wali, former Minister of Social Solidarity, said: “The homeless people on the streets are divided into three types, some of whom suffer from mental illnesses and need to be transferred to mental hospitals.” She explained that the second type is the elderly who do not have a shelter to reside in and those who were abandoned by their children after reaching old age. She saw that the third type is the most dangerous, and they are the elderly beggars, given that they refuse to move to social care homes and prefer to stay in the street and beg.