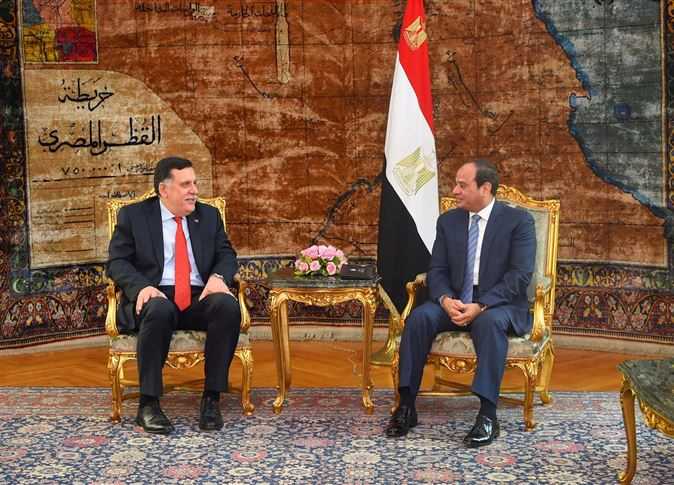 In a visit, the first of its kind since the attack by the militia of General Khalifa Haftar on the Libyan capital, Tripoli, the head of the Libyan Government of National Accord (GNA), Fayez al-Sarraj, met with high-ranking Egyptian officials in Cairo last Monday. This meeting came during a short visit during a flight from Turkey to Bahrain, according to Egyptian officials, and a source familiar with al-Sarraj’s trips from the Government of National Accord. Still, that visit nonetheless is a noteworthy event.

However, the collapse of Haftar’s 14-month attack on Tripoli changed the political equation in Libya. Haftar has mainly been marginalised by many of his international supporters, including Egypt, and the United Nations has restored the long-stalled political dialogue process that began in Tunisia last Monday for a period of six days. Al-Sarraj’s brief meeting in Cairo comes in the context of this change in relations. Egypt had hosted the Interior Minister of the reconciliation government, Fathi Bashagha, only weeks ago.

According to an Egyptian official, al-Sarraj sent indications of his desire to visit Egypt when he made a statement expressing his desire to resign from his post at the end of October if a new government was formed. A source close to the interior minister of the GNA said that Bashagha also laid the foundations for the meeting between Egypt and al-Sarraj during his visit to Cairo. The Egyptian official believes that the election of Joe Biden, President of the United States of America, made the timing of the visit “correct” in recent days, indicating that there is a belief in Cairo and Ankara that the new American administration will take care of the Libyan issue again.

“Biden may want to empower al-Sarraj,” the Egyptian official says, adding that Egypt does not want to oppose the United States’ desire, so it is ready to open up to figures in the reconciliation government. The source indicates that Egyptian officials understand that al-Sarraj’s short visit won the Turkish President’s approval, Recep Tayyip Erdogan. In this context, a source close to the Turkish presidency said that Turkey is ready to open a new page with Cairo to work on a roadmap to deal with regional issues, including Libya, indicating that Egypt can benefit from Ankara’s regional influence in the face of the growing Gulf influence that is starting to worry Egypt. Al-Sarraj was not the only prominent GNA figure who recently met Egyptian officials. Shortly after the departure of al-Sarraj, the deputy head of the al-Wefaq government, Ahmed Maitiq, arrived in Cairo from Abu Dhabi, where he met Khalifa Haftar’s son, Khaled, and General Aoun al-Farajani, Haftar’s cousin and head of the Libyan National Army’s leadership apparatus, according to a government source. Al-Watania is aware of the movements of Maitiq and a second Egyptian official.

The second Egyptian official says that the three politicians’ visits come within the framework of Egypt’s strategy to open up to the leaders of the reconciliation government after they responded to Egypt’s demand that the Sirte and Jufra be considered a red line and a demilitarised zone.

The three figures, Bashagha, Sarraj, and Maitiq, have introduced themselves to play political roles in the future, according to the second Egyptian official, who explained that Bashaga and Maitiq are competing for who will be the next prime minister. Maitiq opened up to the LNA in recent months, after he met one of Haftar’s sons in the Russian city of Sochi last September, and agreed to a plan to resume oil production, which the LNA had halted since last January. Maitiq’s colleagues in the GNA and the National Oil Corporation categorically rejected that plan, and the latter condemned what it described as “secret” talks that could endanger the oil infrastructure. With the launch of the Libyan Political Dialogue Forum in Tunisia, Egypt is also keen to prevent any violence in the east that could undermine the talks, which the second Egyptian official says “did not go very smoothly, but Egypt is still keen to coordinate with the United Nations.”

Despite this, the Special Representative of the United Nations Secretary-General for Support in Libya, Stephanie Williams, said that the participants in the Libyan Dialogue Forum in Tunisia reached an agreement on holding parliamentary and presidential elections in the country within a period of no more than 18 months. “The participants in Libya found a solution to end the transitional period and organise fair, comprehensive parliamentary and presidential elections with confidence, and they clarified steps to reach the elections according to a constitutional basis,” Williams said at a press conference yesterday in the Tunisian capital.

The talks in Tunisia, in which the United Nations has chosen 75 Libyan participants to represent a range of political views, regional interests, and social groups, come when the main warring parties discuss how to implement the truce agreed upon in Geneva. Before the talks in Tunis, Cairo mediated several high-level talks between the two sides in an attempt to play a decisive role in the political and military future of Libya, and these efforts aimed to increase Egyptian influence on the restructuring of the Libyan armed forces and the selection of its future leadership. 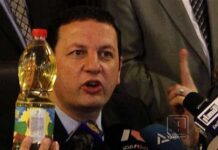 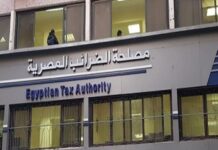 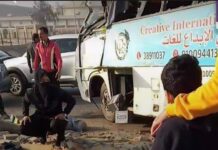 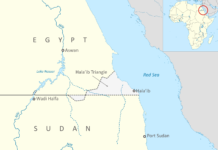 The impossible reform: al-Sisi’s regime is out of balance