EgyptWatch
Home Reports Biden’s victory: Will it strengthen the thorn of the opposition in Egypt?
Facebook
Twitter
WhatsApp 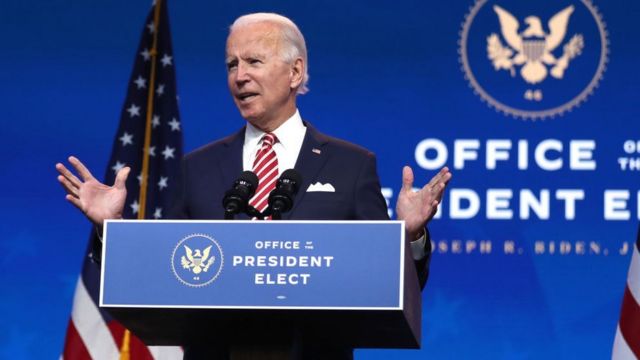 The news of Abdel Fattah al-Sisi’s meeting with the leader of the opposition in Greece did not escape Egyptian academic Mustafa Kamel al-Sayed, who asked in a tweet: “Can there be an opposition leader in Egypt, could he meet presidents and country guests?” Al-Sayed’s tweet came after the announcement of the Democratic candidate in the US presidential election, Joe Biden, on whom hopes were pinned for the return of the opposition in Egypt, after the years in which al-Sisi was the “favourite dictator” of US President Donald Trump.

Perhaps this hope goes back to what Biden Nafs said when he pledged that the United States would not continue to support dictators and announced that he will review his country’s foreign policies with countries that violate human rights. Biden’s win comes when the Egyptian government is still afraid of a change in American policy, which prompted it to contract with a public relations company in America to improve the regime’s image with the Biden government.

The Egyptian opposition is striving for a new position that strengthens its thorn that waned during the years of al-Sisi’s rule, as the Brotherhood rushed to congratulate Biden, accompanied by a request to change his policies towards the Egyptian regime, citing a previous statement not to grant al-Sisi blank cheques. This hope comes despite Biden experiencing the height of the escalation of the crisis during the Egyptian army coup against former President Mohamed Morsi, who belonged to the Brotherhood. He was at the heart of the US administration during the three years of al-Sisi’s first critical term. Amid the coup against Morsi, and the events that followed, which resulted in the arrest, death, and injury of thousands, according to the opposition, Biden, the Vice-President of the United States at the time, was not remarkably well-known. At that time al-Sisi was defence minister, and then he became president.

These years witnessed the major massacres in Rabaa and el-Nahda squares, the suppression of the demonstrations that lasted for several months after the coup, and al-Sisi’s installation as president in sham elections. However, Biden, in these years, completely diverged from him in the last year, during his election campaign, declaring that he refused to grant al-Sisi blank cheques if he won, and criticised the human rights situation in Egypt. A few months later, 56 lawmakers from Biden’s Democratic Party addressed a letter to al-Sisi, calling for a breakthrough in the situation and the release of activists and opponents last October.

However, Egypt will remain a pivotal country, which is difficult to bypass, especially in Palestine, Libya, Syria, and Sudan, in addition to finding a balance in its relations with Russia, China, Israel, Saudi Arabia, and the UAE, according to observers. This means that Biden is wearing the suit of the first statesman in the United States that will not allow him to place the struggle between power and Egypt’s opposition on the list of concerns of the White House.

Likewise, the possibility of waving a stick threatening to freeze annual US aid to Egypt remains limited, especially after it was frozen in 2013, then quickly returned in 2015, under the pretext of ” US national security interest.” Hence, the American administration’s bias towards the Egyptian opposition remains closer to media movements and skirmishes in closed rooms, in line with the policy of the Democratic Party in support of human rights and freedoms in the region. This point is what politicians and opponents in Egypt will rely on and the extent to which Biden will be able to redraw Washington’s image, defending human rights, after it disappeared and faded completely during the era of his predecessor Trump.

In this context, political science professor Abdel Fattah Madi believes that Trump’s departure from the White House represents a gain for all democratic forces worldwide. Madi expected that the efforts of international human rights organisations and pro-democracy forces would be strengthened with the advent of Biden, and the issue of freedoms and human rights would actually be raised at the rhetorical level in US foreign policy. Madi stressed that converting this American rhetoric into policies and pressures requires an essential condition, which is the emergence of the real democratic opposition in Egypt, capable of adjusting the dysfunctional balance of power in favour of the regime through a peaceful democratic change project and new political discourse.

Madi pointed out the need to understand how foreign policy is made in America, as it is impossible to rely only on the new president’s character. He said that the American position towards Egypt is not controlled by the president alone or by the team that will work with him in the White House and the Ministry of Foreign Affairs, but there is also the Ministry of Defence, which has strong strategic relations with the Egyptian army. He also referred to the role of the Israeli and Emirati lobbies in supporting the continuation of the status quo in Egypt, and the United States has interests in Egypt and the Middle East, and the Biden administration will defend them as Trump used to do, but with softer tools.

As a result, Biden will not seek the Egyptian opposition as much as it aspires to him, which became clear through the early Brotherhood’s speech to congratulate him on his victory, which reflects the thirst of the opposition forces for a new position that resolves their stalemate that has existed for years. Observers expect that the opposition will create a foothold for itself with every possible attack by Biden on al-Sisi, to ease the pressure of the siege that it is witnessing, which is evident over the issue of political detainees in prisons.

Essam Abdel-Shafi, professor of political science, director of the Egyptian Institute for Studies, considered Biden’s victory an opportunity for the Egyptian opposition, especially after he announced his interest in human rights. He explained that al-Sisi pre-empted Biden’s victory by releasing hundreds of political detainees. The Egyptian opposition could build on it to develop a strong working mechanism and form an integrated vision in human rights and political openness. And recently, Egyptian tweeters launched the tag “Blessings, Biden,” which became, which trended within days, to link his victory with the authorities’ decision to release hundreds of political prisoners.

It appears that the Egyptian authorities have also tried to invest the detainees’ release paper in appearing more flexible in dealing with the freedoms and human rights situation facing the new US administration. On the future of the Egyptian opposition, Abdel Shafi pointed out that the matter is not related to Biden’s victory or to anyone else, but rather it is related to the ability of this opposition to develop a strong political discourse through which it can create an active party in Egypt.

Finally, the opportunities for the opposition remain vacillating between boldness and mastery, based on several factors, most notably the strength and cohesion of its forces in presenting its issues and the US administration’s interest in using it to put pressure on the Egyptian regime. This is what the head of the Egyptian-American Dialogue Centre, Abdel Mawgoud Dardiri, said when he said that Biden would not write a blank cheque for Egypt, nor will he provide aid to the army without setting conditions, including progress in the human rights file. He added that the opposition could have a primary role in the coming period if it is able to adapt.

Al-Sisi’s regime is floundering after news of Gulf reconciliation