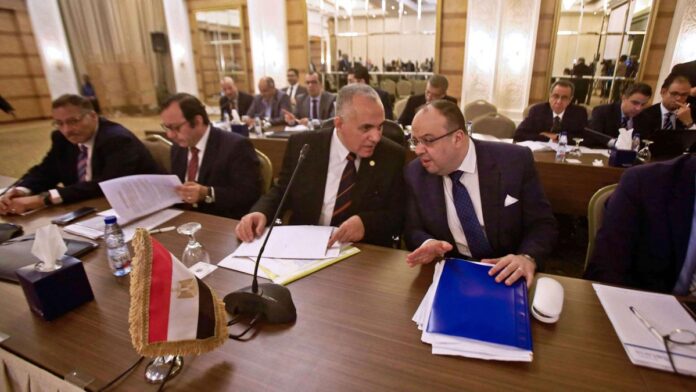 The Sudanese government’s announcement that it will withdraw from the Renaissance Dam negotiations and not participate in the six-party meeting under the auspices of the African Union raised astonishment and anger among experts and specialists in Egypt.

For his part, Mohamed Nasr Allam, the former irrigation minister, believed that this decision would affect the fate of the negotiations and put Ethiopia in a good position. Allam launched an attack on the Sudanese irrigation minister, saying that he was singing away from Egyptian-Sudanese cooperation in all fields. He emphasised in press statements that Khartoum’s position serves Ethiopia’s interest and turns Egypt into a state that refuses to negotiate. He added that the Sudanese irrigation minister’s vision is related to the impact of the Sudanese Roseires Dam only, which is an ignorant view on the dangers of the Grand Ethiopian Renaissance Dam, according to his statements. He explained that it is necessary to unify concepts between the two countries to develop a single negotiation strategy to face this dam that detracts from the two countries’ rights.

Both Sameh Shoukry, the Egyptian foreign minister, and Mohamed Abdel Aty, minister of water resources and irrigation, participated in the six-party meeting of the foreign and water ministers of Egypt, Sudan, and Ethiopia. The meeting was held under the chairmanship of the minister of foreign affairs of South Africa, whose country holds the current presidency of the African Union, as the Renaissance Dam negotiations are currently under the auspices of Africa after they stumbled and failed several times in the past. Egypt reiterated its emphasis on the importance of resuming negotiations to reach as soon as possible a legally binding agreement on filling and operating the dam.

The withdrawal of Sudan from the negotiations came in a letter from the Sudanese Minister of Water Resources and Irrigation, Yasser Abbas, to his Ethiopian counterpart, Slichi Bickley, in which he confirmed that the method used in previous negotiations had proven to be ineffective. The letter stressed Sudan’s position calling for giving the African Union experts a greater role to facilitate negotiations.

The message reaffirmed Sudan’s adherence to the negotiating process under the African Union’s auspices to reach a binding and satisfactory legal agreement for the three parties in the implementation of the principle of African solutions to African problems. For his part, Abbas al-Sharaki, head of the natural resources department at the Institute of African Studies at Cairo University, said that Sudan’s withdrawal came after negotiations returned to zero.

Al-Sharaki added that the differences returned due to Ethiopian intransigence and evasiveness, explaining that we are trying to agree on the methodology of negotiation, and if we succeed in that, we will begin to negotiate the real technical and legal points of the dam. He warned in press statements that Ethiopia might complicate the situation and turn it into an external conflict to distract the Ethiopians from what is happening at home and promote an external threat to unify the internal ranks. Al-Sharaki questioned the African Union’s ability to solve the problem of stalled negotiations on the Renaissance Dam, especially after the union failed to solve many African issues such as Libya, Somalia, and Eritrea with Ethiopia.

The ongoing negotiations under the auspices of the African Union come after several rounds, all of which ended in failure, most notably the US-sponsored negotiations, in which Ethiopia refused to sign the text of the document. Egypt fears the impact of the Renaissance Dam on its share of water, which amounts to 55.5 billion cubic metres annually, which it gets most of from the Blue Nile, amid Egyptian statements about the country entering the water poverty stage.

Egyptian opposition and activists accuse the al-Sisi regime of complicating the dam crisis after al-Sisi signed an agreement of principles in Addis Ababa in 2015, according to which he waived Egypt’s historical rights in the Nile River. In the context of Sudan’s withdrawal from the negotiations, Diaa al-Qousi, an advisor to the former minister of irrigation, explained that the Ethiopian party is the one who benefits from prolonging the negotiations.

In a press statement, he stressed that negotiations’ frequent postponement undermines the negotiation’s credibility and creates very worrying scenarios. Al-Qousi asked the African Union to be decisive and set a clear timetable for the negotiation process’ progress, stressing that Egypt does not reject the Sudanese proposal but rather supports it by including international observers to ensure neutrality.

One billion dollars in monthly losses… How did Egyptian tourism collapse...