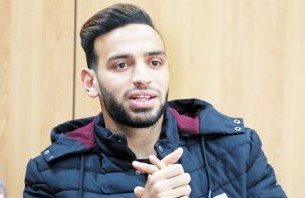 A hashtag entitled (Where is the player Mido Jaber?) is circulating on social media in Egypt in an attempt by activists and football fans to solve the mystery of the player’s disappearance under mysterious circumstances. The former player of al-Ahly and the Misr el-Makasa SC Club, and a recent joiner of Ceramica Cleopatra Club, disappeared strangely and suddenly while in a camp with his new club inside one of the army’s hotels.

The fate of Mido Jaber, the football player, has become a great mystery, amid calls for the security services to reveal his fate and announce his current whereabouts. Through the communication sites, the participants confirmed the involvement of the National Security Agency of the Ministry of Interior in hiding Mido, explaining that the method of kidnapping the player from inside the hotel is consistent with the method of arresting opponents.

Activists indicated that the hotel’s insistence not to display their surveillance cameras’ contents confirms their knowledge of the football player’s arrest and kidnapping by the security services. Many of Mido’s fans shared an old video clip of the Zamalek club’s isolated President, Mortada Mansour, in which he claims that Mido Jaber and his entire family belong to the Muslim Brotherhood. Activists criticised the blackout of many sports programmes and newspapers on the news of Jaber’s disappearance and their failure to address his case, which indicates their knowledge of his arrest. Through the hashtag, the participants demanded the release of Jaber considering that what happened was a scandal for Egyptian football and sports activities.

The security services in Egypt resort to kidnapping citizens and political opponents and hiding them for periods of time during interrogation, denying their presence in security headquarters, and then revealing them after a period of time pending a political case. Al-Sisi’s regime is facing international and human rights charges for the enforced disappearance of activists and dissidents, as human rights organisations have recorded thousands of cases of enforced disappearance in Egypt.

The most recent one

According to the story transmitted by Moataz al-Batawi, the football supervisor at Ceramica Cleopatra Club, Mido Jaber was present with the team inside his closed camp located in one of the hotels in the Fifth Settlement in Cairo. While the player was trying to enter his room in the hotel, he was surprised to find that the room door’s electronic card was not working.

Al-Batawi explained in a press statement that Jaber asked one of the hotel workers to activate the card through the reception staff, but the worker came back shortly and informed the player of the need to attend the reception personally. He added that Mido met two people in the hotel lobby, and these two people asked the player if they could take a souvenir photo with him, then took him outside the hotel, and moments later, the player’s phone was off.

According to the statements of the football supervisor of the Ceramica Cleopatra Club, the hotel management refused to give the club officials the recordings of the surveillance cameras in the hotel allegedly because he did not have security clearance to do so. He added that in the end, officials of the Ceramica Cleopatra Club had to go to the police station to issue a report of the disappearance of the team player, amid complete ambiguity about the reasons for his disappearance. Al-Batawi ruled out that what happened to the player was an attempt by one of the clubs to thwart his transfer to Ceramica club, which completed the procedures for obtaining the player’s services from the Misr el-Makasa SC Club.

The latter has actually obtained the player’s transfer value, while officials of the newly-promoted club are preparing for the league to register the former player for Misr el-Makasa SC and al-Ahly club in their team list in the coming days. For her part, the player’s mother asked for support to reassure her about her disappeared son, and she said in a media interview: “I do not know where my son is, and I do not know anything about him.”

In 2017, Aswan Club player Hamada al-Sayed was subjected to enforced disappearance and his club and his family did not know anything about him, then he appeared after a while for investigation at the prosecution. Hamada al-Sayed was detained for more than two years before being released after he was acquitted of the charges brought against him by the Supreme State Security Prosecution.