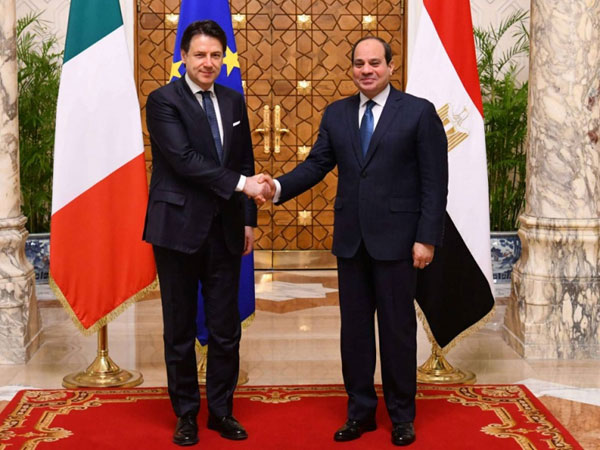 A state of tension has come to dominate Egyptian-Italian relations, which threatens to impede the implementation of economic and military cooperation agreements between the two countries. This tension appeared in the escalation of Italian anger against Egypt in cases related to human rights. This escalation and anger surfaced with the arrest of the leaders of the Egyptian Initiative for Personal Rights, as well as the continued imprisonment of the human rights activist who has resided in Italy, Patrick George Zaki, in addition to the completion of the investigations into the death of researcher Giulio Regeni.

Last week witnessed the turning point. The beginning was with an article by Italian newspaper La Repubblica, when it said that the public prosecutor was on his way to end the investigations into Regeni’s murder and begin the trial of the accused within two weeks. These investigations may reduce the Egyptian government’s margin to legally maneuver regarding the trial of National Security officers accused of killing Regeni, especially since the Egyptian authorities did not provide the necessary cooperation, in light of the Italian investigations uncovering sufficient evidence and documenting the direct involvement of the Egyptian security services in the killing of Regeni.

The Italian public prosecutor can request the commencement of the trial if he finds that his evidence is sufficient, while the defendants must be summoned before the judge, first notifying them of the end of the investigations, the charges against them, and all available evidence against them, to enable them and their defence to review it. Within 20 days of being notified of the start of the trial, defendants may present a defence memorandum, the results of their own investigations, or request the public prosecutor to conduct specific investigations. However, the obligation to notify the accused may constitute a legal challenge if the Egyptian investigation authorities do not cooperate by providing the Italian side with sufficient information about the accused’s residency addresses.

The Italian public prosecutor published a statement early last July, after he met with the Egyptian side, stating that “there is a need for tangible reactions from the Egyptians in a short time regarding the place of residence of the suspects, whose names were identified by the Italian investigators last year.” These demands have not been answered by the Egyptians so far. The Italian researcher’s body, Giulio Regeni, 28, was found outside Cairo on February 3, 2016, a week after his disappearance on the fifth anniversary of the January 25 revolution. After examining the body in Rome, the initial forensic report stated that Regeni had been tortured for several days and that he passed away after suffering a fractured vertebra in his neck. As for the second case, it is the arrest of three leaders of the Egyptian Initiative for Personal Rights, which is a non-governmental human rights organisation that is concerned with Egyptian internal affairs and exposes the violations committed by the regime.

The security forces arrested three of the initiative’s leaders, including its executive director, and State Security charged them with terrorism-related charges and ordered their detention pending investigation. These arrests sparked a storm of condemnations regarding Egypt’s human rights record by international human rights groups, in addition to Western politicians and diplomats. Among these convictions was a letter from the Italian ambassador to Egypt and other ambassadors, when they sent a letter to the Egyptian Foreign Minister Sameh Shoukry, condemning these arrests. The letter demanded the release of the initiative members, according to Adnkronos Italian news agency.

The Italian ambassador in Cairo was among a delegation of Western ambassadors who visited the initiative headquarters on November 3 to discuss ways to support human rights situations in Egypt and worldwide. According to observers, the arrests sent an Egyptian message to these ambassadors, that it is unacceptable what happened, which Western countries rejected, including Italy. The initiative, which has been active for 18 years, is the most prominent among the few that are still operating and continues to document violations of civil rights, prison conditions, sectarian violence, and discrimination against women and religious minorities. The third case is not far from the initiative. It goes back to February, when Patrick George Zaki, the Egyptian researcher in gender rights in the initiative, was arrested after returning from Italy, as he was studying there.

According to the organisation, Patrick was on study leave from his work to obtain a master’s degree at the University of Bologna in Italy, and he was arrested while returning to Cairo on short leave and was interrogated by the National Security Agency at Cairo Airport. During his detention, Patrick was subjected to “threats, torture and electric shocks while being questioned about his work and activities,” according to his lawyer, before he appeared after about 24 hours. He has been imprisoned since then. The prosecution charged Patrick with “spreading false news and statements, inciting unauthorised demonstrations, inciting to overthrow the government, and managing a Facebook account with the aim of disturbing public order.”

At that time, the Egyptian Commission for Rights and Freedoms quoted Italian officials’ comments on the incident, including the parliamentarian Erasmo Palazzo urging his government not to ignore the incident and the former Minister of Higher Education’s announcement of his intention to apply for a parliamentary investigation into the incidents of Patrick being tortured by the Egyptian security forces. It also quoted the head of the investigation committee into the killing and torture of Regeni in parliament as saying, commenting on Patrick’s imprisonment, “How can we consider Egypt a safe country?” During the past months, activists worldwide have signed a petition calling for Patrick’s release.

According to observers, because of these three issues Egypt’s only bet to keep normal relations with Italy is to increase the rates of arms imports. Egypt spent 238.5 million euros on the purchase of Italian weapons in 2019, compared to approximately 69.1 million euros in 2018, exceeding the total value of Egyptian purchases from Italy in the last decade by tens of millions. Egypt ranks fourth in the world among Italian arms importers, behind Kuwait, Qatar, and Germany. However, the escalation of human rights violations related to Italy stoked fear in the government, which was evident in the latter’s refusal to visit Egypt months ago.

Italian Prime Minister Giuseppe Conte linked at the time to the full development of his country’s relations with Egypt by revealing the truth about the circumstances of Regeni’s death in Cairo. Conte stressed that “the Regeni case also hindered other initiatives such as opening a university in Cairo.”