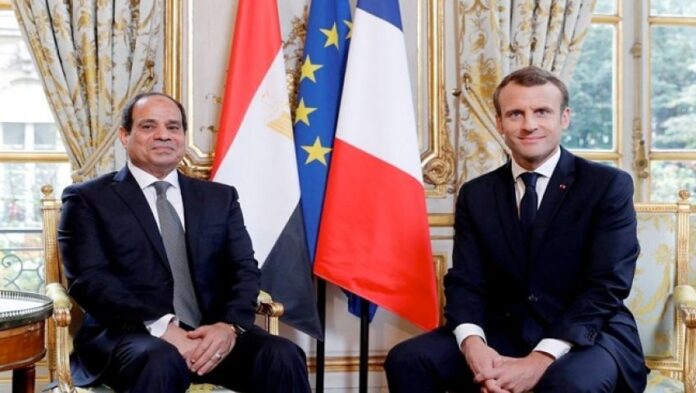 Abdel Fattah al-Sisi is visiting France, about two years after the last official talks, in a state visit between him and French President Emmanuel Macron. The two entered into an open dispute over the human rights situation in Egypt.

During Macron’s visit to Cairo in January 2019, this matter left a state of apathy between the two parties and led to faltering cooperation in some areas, despite the continuation of coordination in other areas. This visit is of exceptional importance due to the current situation of human rights in Egypt, which has not changed much in recent years. Indeed, the observer finds an escalation in the fierce security attack on the human rights community, especially in the incident of the Egyptian Initiative for Personal Rights and the arrest of three of its leaders, following a meeting held by the initiative’s management with several European ambassadors.

Al-Sisi’s government also announced the approval of the new private labour law’s executive regulations, which was one of the focuses of the recent discussions that took place in Cairo last month, between French Foreign Minister Jean-Yves Le Drian and al-Sisi. For the French, the visit is also important to emphasise Paris’ respect for the Arab and Islamic world in the wake of the crisis of cartoons depicting the Prophet Muhammad.

The French consider al-Sisi’s vision among those closest to them in his regional environment, given his anti-political stances and the escalation against France or any other country in the economic boycott in protest against insults against the Prophet. The visit is also an opportunity to study the ideas of preparing for a European Islamic conference to combat extremism and abuse of beliefs, ideas that Paris welcomes, but with conditions.

Macron is currently facing harsh criticism from the opposition and the press because of the upcoming visit, and his government’s advanced dealings with the current Egyptian regime in recent years, especially over arms as an extension of a previous attack by several organisations, due to the export of various weapons used to suppress civilians inside the country.

In October 2018, Amnesty International confirmed that the Egyptian security forces fired on the demonstrators from inside the armoured cars supplied by France, including Sherpas and MIDs that were used during some of the bloody events. Although Egypt has become one of the main contractors to buy French weapons during al-Sisi’s reign, the two countries coordinate their intelligence and military efforts in Libya and the eastern Mediterranean region.

Human rights accusations have had negative effects on the areas of investment and military deals in the last two years, given the volume of deals concluded by the Egyptian army and al-Sisi’s government with Italy and Germany, which has become a concern in various circles in Paris. France apologised for providing Egypt with its maritime requests when it informed it, in autumn of last year, of its desire to raise its naval forces’ efficiency and expand the fleet of multi-role frigates. Paris informed Cairo that it would not be able to fulfill its special requests quickly and that Italy had ready-made parts of the FREME frigates, which it could urgently supply to Egypt. This has already happened – the deal to acquire the two frigates was the beginning of the largest arms deal in Egypt and Italy’s history, perhaps worth 11 billion euros.

According to sources, the French were not sincere in claiming that there is a technical reason behind the difficulty in supplying Egypt with the required weapons and equipment. Rather, the reason is hidden diplomatic tension between the two countries over several issues, most notably the human rights situation. According to the sources, some real-life figures around Macron are currently pushing to use human rights to push al-Sisi to conclude more deals and grant preferential advantages to the French instead of intimidating him. During the visit, he is expected to discuss several topics that Le Drian had previously discussed during his last visit, such as the issue of the continued imprisonment of dozens of political and human rights activists who were arrested before and after the events of September 20, 2019.

The most prominent of those accused are on a case known in the media as the “Hope Group,” who were trying to coordinate to participate in the House of Representative elections. The authorities prevented them from exercising their political right by arresting them. The file of the fate of specific activists will be discussed, and complaints that have reached Paris and are monitored by human rights organisations about detainees’ poor conditions in Egyptian prisons.

The French Foreign Ministry previously issued several statements regarding this case, urging Cairo to release them and remove their names from the terrorism list. Among the topics that Le Drian presented was the fate of the foreign funding issue for civil society organisations, which has not yet been formally completed after nearly five years of summons, examination, security prosecution, travel bans, and fund freezing decisions. Le Drian did not get any clear answer on these issues, as al-Sisi insisted on reiterating that all these cases are in the hands of the “independent judiciary” and are still under investigation, and the executive authority is not allowed to intervene in them.

Egypt and Italy… a judicial struggle between the Rehini killers and...