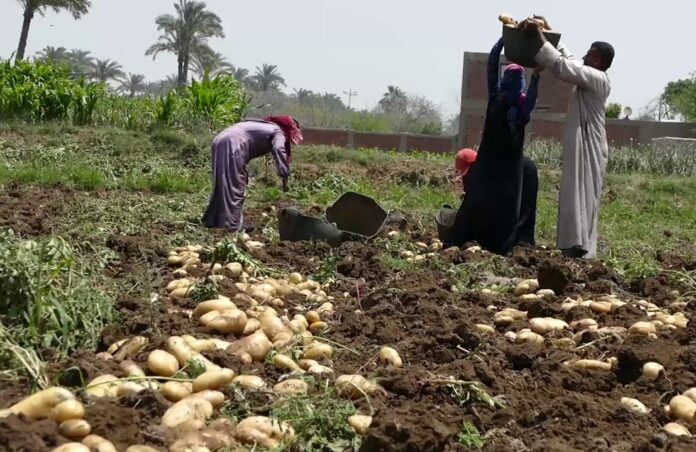 A sudden collapse in potato prices in the Egyptian market led to huge losses for farmers, who issued distress calls to the government, demanding to intervene to save them. During the past days, the price of a ton of potatoes reached 100 pounds, and the price of potatoes ranged between 70 to 150 piasters per kilo, and in some markets, potatoes recorded 50 piasters according to their size and quality.

The price of a ton of potatoes had reached 10 thousand pounds before the sudden collapse of prices, and the price of a kilo reached ten pounds before retreating now to only half a pound. The arrival of the price per kilo to 50 piasters prompted some farmers to throw their potato crops in the streets, banks, and canals, expressing their anger and shock at what is happening to their capital. Some farmers in Upper Egypt have turned to convert potatoes into animal feed, especially in Minya villages, which are famous for potato exports abroad.

According to Samir Al-Najjar, head of the Agricultural Businessmen Association, the increased losses of potato crops caused the execution of some Egyptian shipments at home and abroad. Al-Najjar explained that these losses result from a large increase in supply and the collapse of prices, calling on the state to intervene urgently to save the crop. Experts warn of farmers ’reluctance to plant potatoes next season, calling for state intervention to protect Egypt’s food security and farmers’ rights.

During the past days, there have been widespread appeals and demands from farmers for the government to intervene to support and compensate them for the losses this year, after the collapse of potato prices. Economists attribute the big decline in potato prices to the closure policy adopted by Egypt and other countries due to the emerging coronavirus pandemic. They explained that the pandemic had a major impact on the export movement and then increased supply against demand, as potato prices gradually declined until it reached a price collapse stage.

While Ahmed Al-Attar, Director of the Central Administration of Agricultural Quarantine, said that the volume of potato exports only decreased by 10 thousand tons, equivalent to one shipment, due to the emerging Coronavirus crisis. In press statements, Al-Attar indicated that the potato crop was exposed to a violent global crisis as a result of the suspension of tourism, restaurants, hotels, and schools in all countries of the world. He added that the crisis affected the ability of Egyptian exporters to obtain financial collection from importers.

For his part, Hussein Abu Saddam, the head of the Farmers’ Syndicate, appealed to the government to take the necessary decisions and measures to extricate farmers from the crisis of the collapse of potato prices. The Head of the Peasants’ Union indicated that farmers had suffered significant losses due to low prices, stressing that potato exports are still continuing despite the Corona crisis, but the return from these exports is low. He explained that the decrease in the revenue from exports results from the decline in the value of most local currencies of the Egyptian potato importing countries and the high costs and difficulty of exporting in light of the Corona pandemic.

In press statements, Abu Saddam said that there are several reasons behind the collapse of potato prices, most notably the abundant supply of fruits and weak demand due to the low purchasing power and the high costs of tomatoes. He added that the Corona pandemic has led to the closure of most hotels and restaurants and a decline in the production of chips factories that used to consume large quantities of the crop.

The head of the farmers ’union pointed out that potato is the second largest crop to be exported from Egypt and one of the most important crops that play a role in bringing in hard currency. He stressed that the collapse of potato prices threatens potatoes’ agricultural future and reduces agricultural areas from them in the future, even though it is the most important crop in Egypt after wheat and rice.

In the same context, Hatem Al-Najeeb, Vice President of the Chamber of Vegetables and Fruits in the Federation of Chambers of Commerce, called on the government to intervene through rational policies to achieve a balance between supply and demand to protect potato farmers. He explained that achieving a balance between supply and demand is necessary to ensure agricultural production continues next season.