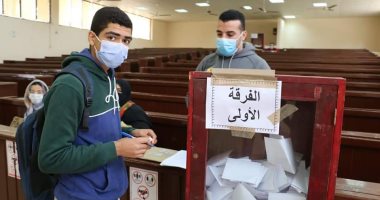 University student union elections were concluded with a sweeping winning of the state-sponsored election list Students for Egypt, which won 416 seats out of 432, with a total percentage of 96.2 per cent.

This sweeping victory was achieved in most seats by acclamation after eradicating the political student movements and excluding independent students. Acclamation settled the election in nine colleges in Cairo University, six in Matrouh University, 16 in Alexandria University, 13 in Port Saeed University, 19 in Canal University and 12 in Benha University.

This year, elections were free of competition after eradicating the dissenting political student movements by security repression since the military coup in July 2013. This scene resulted in students’ reluctance to run for the union. For example, 1,089 students ran for the union in Cairo University out of 257,000 students in the university, and only 259 students in al-Arish University. Seventy-five candidates were excluded in Cairo University and 380 in Assiut University. The universities said that the exclusion was because they did not meet the candidacy requirements, while in fact the exclusion was because of orders issued by security bodies.

The university scene this year was the same as the previous years, when the administrations distributed the seats between particular students out of elections. In 2018, the independent students were excluded from elections for what the universities described as “the public interest,” and other students were excluded for “security causes.” Moreover, Students for Egypt Group tempted young students with postgraduate appointments in universities to support the list.

Over the period between the 25 January Revolution and the 3 July military coup, the Egyptian universities witnessed competitive student union elections with expanding power of the students in managing the campus life, but later the university came under tyrant repression with repeated storming of the campus by police, who used live bullets and killed students inside universities for demonstrating.

In 2015, the minister of higher education resolved the student unions after a sweeping victory of dissenting and independent students in the last free elections. The state-sponsored student associations failed to compete despite the support of the security bodies. The decision frustrated the political student movements, who have become convinced of the uselessness of competition in previously decided elections and then paying a high price with detention for challenging the authorities.

In 2016, the Egyptian authorities gave the student movement the knockout, when it issued the new student activities regulations. It was a piece of tyrant literature that permitted the dean of colleges the authority to exclude the candidates in the student elections due to their political attitudes. Thus, the exclusion of the students due to instructions of the security bodies turned to be legal.

The Egyptian regime sees in every election a challenge and upcoming threat, because his organs fail to win any free elections with the deterioration of the regime’s popularity. This resulted in mocking every election through excluding the competitive candidates and manipulating the vote counting. Thus, Egypt became a country that does not know free and fair elections.