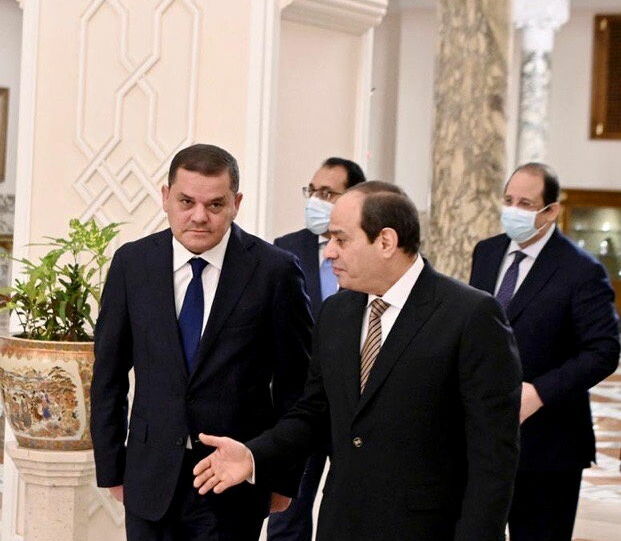 On February 18, Abdel Fattah al-Sisi received the new head of the Libyan government, Abdul Hamid al-Dabaib, at the Federal Palace in Cairo. The meeting came within the framework of Egypt’s efforts to show good intentions and welcome the new authority in Libya, and the efforts of al-Dabaib to gather international support for his nascent government that faces many challenges. The Egyptian statement issued after the meeting revealed Cairo’s priorities in Libya, and what it wants from al-Dabaib and his government.  Cairo wants to “restore security [protecting its eastern borders and eliminating the danger of Islamic private militias], stabilise the country [having a central authority that Egypt can deal with, and get rid of foreign forces, especially Turkish ones], then to start service and development projects [getting a share of Libya’s rich reconstruction cake].”

Egypt did not expect the Libyan political dialogue forum to succeed in choosing a new executive authority in Libya. However, it informally supported a list competing against al-Dabaib. The list, backed by Cairo, included prominent men from eastern and western Libya: Aguila Saleh, the chairman of the House of Representatives of eastern Libya, who emerged during the last Tripoli war as a leading figure in the peace talks; Fathi Bashaga, Minister of the Interior of the National Accord Government and one of the few officials in eastern Libya who have good relations with Egypt; and Osama al-Juweli, commander of the western military region. The list of Abdul Hamid al-Dabaib, a prominent businessman from Misrata whose list currently includes the largest and most powerful militias in western Libya, has been able to turn expectations and defeat the Saleh-Bashaga-Juweli list, which is backed by Egypt and other countries, in a surprise that shocked the authorities in Cairo.

The reaction of surprise came through informal state-sponsored trumpets, such as Journalist Moustafa Bakri, a close associate of the Egyptian Intelligence, who criticised the results of the elections: “The results of the fictitious and illegal elections to elect the president and the members of Libya’s presidential council are at least a plot against the Libyan people, a blow to the unity, security and stability of the country.” He added, “An international-Turkish-Brothers plot targets the Libyan National Army and its leader, General Khalifa Haftar.”

The official reaction came through the Egyptian Ministry of Foreign Affairs, which declared that Cairo welcomes the results of elections, expressing its aspiration to work with the interim Libyan authority. Five days later, al-Sisi telephoned Abdul Hamid Dabaib and Mohammad al-Exile, the new president of Libya’s presidential council, to congratulate them on their election to lead the new interim government. Egypt could not show rejection of the results of the Libyan political dialogue forum or any hostility toward al-Dabaib, as the latter has international support from the United Nations, the European Union and the United States, so the Egyptian authorities tried to adapt to reality. The most prominent of these attempts was al-Dabaib’s official reception in Egypt and his meeting with al-Sisi.

Al-Dabaib has little to offer

So far, the birth of al-Dabaib’s government is still stumbling, as it has not got the confidence of the parliament in eastern Libya yet, amid reports about pressures exerted by Haftar and his sons to get their required share of the ministerial appointments and the main foreign diplomatic positions in the new government, or they will hinder the formation of the government. Moreover, according to the agreement of the Libyan Political Dialogue Forum, al-Dabaib’s government is an interim government that is to lead the country until the new general elections, which to be held next December.

If al-Dabaib succeeded in overcoming the obstacles to forming his government, Libya will remain very complicated and multipolar, as it is not expected that all authorities and militias in the country will subject to it, and consequently there will be no strong central authority in Libya soon. Thus, Egypt will face a difficult task in balancing an increasingly diverse set of alliances to achieve its own strategic interests.

Egypt is expected to continue to coordinate with Khalifa Haftar, the commander of the so-called Libyan National Army, whose forces control eastern Libya, in order to secure its eastern borders. As for the exit of foreign troops from Libya, especially Turkish troops, al-Dabaib is unlikely to take any step in this direction due to his connections with Ankara. “The maritime agreement with Turkey is important and will continue to work, while other agreements will be studied and dealt with in a good legal way,” al-Dabaib said. “Turkey is an ally, friend and sister and has many possibilities to help Libyans reach their real goals.”

The the number of deaths in Egypt 2020 reveals the governmental...

Al-Sisi declares a state of emergency in Egypt for the 12th...