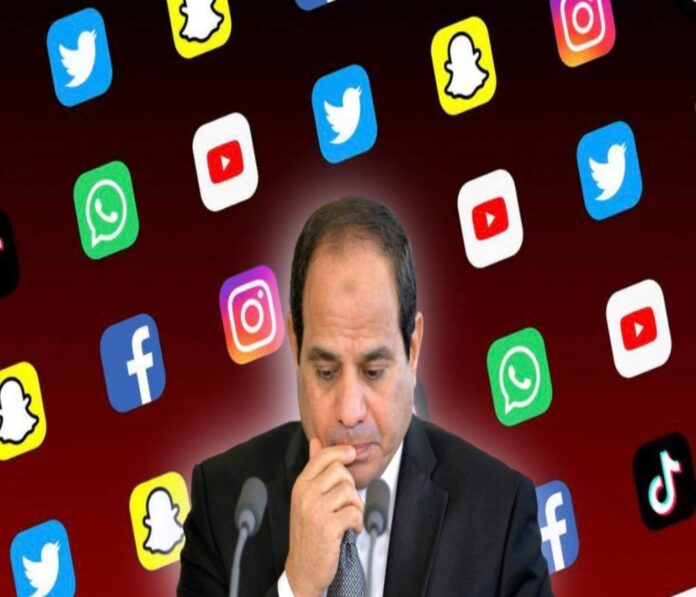 Restrained laws and deterrent penalties make one think over and over before writing on social media in Egypt, which raises the question of why General Abdel Fattah al-Sisi is fighting these sites, activists and human rights defenders say.

Social media sites have become the most common platform for Egyptians to express their views and hopes, despite the penalties for doing so, which may lead to lengthy jail terms and heavy fines.

Social media platforms, despite the permanent suspicion cast on them by the Egyptian authorities, gained their importance in the absence of the role of the media, even parties, and people’s representatives, and their failure to convey the citizen’s voice, represent his interests and shed light on the crises he faces. Egyptians have no choice but to take to social media to express their views. Noteworthy is that the authorities, which feel concerned about any interaction or intention to protest, are also concerned about any interaction or escalation of anger on any issue of any kind, whether political, economic, social, or even humanitarian.

Many events and their developments in the recent period have shown how interactions on social media have come to fruition, as it forced authorities to take steps backward in many decisions and laws that some see as unfair. The most prominent of these laws is the so-called Reconciliation Law in Construction Violations, and also the law on real estate registration that President Abdel Fattah al-Sisi postponed for two years.

Magdy Hamdan, vice president of the Democratic Front Party, believes that “most of the issues raised collectively on communication platforms are subject to review and investigation by the Egyptian government.” He added, “These platforms have thus become the only media platform speaking for the Egyptian people, as a result of the absence of the role of parliament, the opposition, newspapers and the media on the one hand, and the closing of the public climate and silencing of voices on the other.”

Hamdan blames the people’s representatives for not fulfilling their role in many issues and crises and described the House of Representatives (the upper house of parliament) as acting on behalf of the government in defending and ratifying its decisions and says that it does not represent the people in expressing their problems and resolving their issues. Hamdan attributes the direction of the authority in the recent period to following up on what is being raised on social media platforms to the historical role that these platforms played in the exit of Egyptians against former President Mubarak’s regime in the January 25 revolution.

The revolution still represents a strong concern for any government or regime ruling Egypt. Even sovereign institutions report to the presidency when it comes to any issue that raises public opinion. However, publishing on communication platforms is dangerous as some Egyptians were arrested because of what they published on communication sites, and accused of spreading false news and rumours that would disturb public security. Perhaps the recent case of the lack of oxygen in the intensive care unit for corona patients in a city in Sharqia Governorate is the latest of these cases.

The Egyptian authorities have realised the role of social media, and it has become one of their goals over the past years. The government has aggressively sought to control the content circulating on it by issuing several laws that limit its influence and expand the imposition of heavy penalties on what it considers “false news” and “malicious rumours” aimed at stirring up public opinion. To reduce the role and influence of social media platforms, the Egyptian government approved four laws that included harsh penalties to counter what it called spreaders of rumours and false news.

These laws are: “Penalties,” “Combating Terrorism and Terrorist Entities,” “Regulating the Press and the Media,” and “Combating Information Technology Crimes.” For his part, former professor of mass communication and head of the journalism department at the Faculty of Mass Communication at Cairo University, Soliman Saleh, said, “The communications revolution is a blessing for democratic countries, but it may be a curse in authoritarian countries.”

Regarding the government’s actions and observatories under the pretext of combating rumours, the former deputy of the Culture and Information Committee of the People’s Assembly asserted: “If the government thinks about the interest of its people, it will establish research and monitoring centres to analyse the content of what citizens write and respond to public opinion issues to enhance its legitimacy and satisfy the people.”

By analysing the content of what is written on social media, according to the media professor, we will find that clouds of anger and discontent are gathering in the sky of the Arab region and it is possible to ignite new revolutions during the next few years. Saleh indicated that the totalitarian state cannot benefit from the communications revolution and its aftermath, because the regime is not popular among the people, and in many countries, especially Egypt, we will find the content of social media expresses outrage against unfair decisions and laws.

In addition to the laws, the government has established a permanent apparatus that reports to the Council of Ministers to monitor rumours and take legal action against them, whether internally or even externally. This body includes in its membership representatives of many sectors of the state, including the military and security, under the pretext of curbing the spread of rumours.

Regarding this situation, the Legal Agenda, a non-profit research and advocacy organisation based in Beirut, said that “with the absence of real circulation of information in the publication and the availability of periodic data issued by the various bodies in a manner that allows the press and citizens to perform their monitoring role, the centralisation of truth will remain in the hands of official institutions only.”

The organisation pointed out that this would naturally lead to dealing with any opinion contrary to it as a rumour or as false news. Issues and debates usually get mixed up on social media platforms and information can be conflicting. This is due to the absence of facts and official data, which opens the door to countless interpretations, as is the case in the law of registering housing units, which has sparked widespread controversy on the Egyptian street.

New information confirms the collaboration of the Public Prosecution in the...

Inflation rate in Egypt jumps to 8%