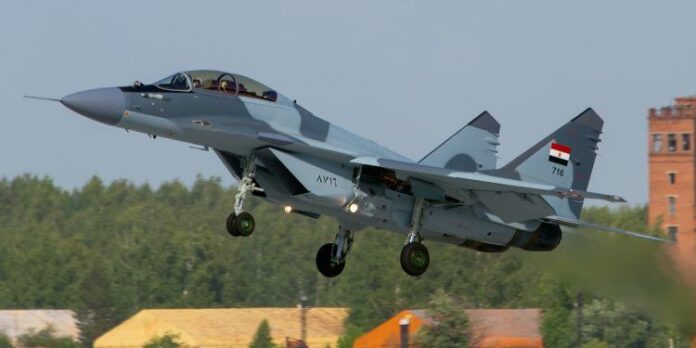 In conjunction with an American trend that appears to be at odds with Abdel Fattah al-Sisi’s regime in Egypt, according to several indicators, Washington renewed its warnings to Cairo about the possibility of Egypt buying Russian fighters.

Cairo began in an agreement with Moscow about three years ago to buy arms including 24 Sukhoi-35 fighters worth $2 billion.

On more than one occasion, observers have reported that Egypt has turned to the Russian deal in response to a previous US reservation to sell Egypt F-35 planes, at a time when Cairo is keen to diversify sources of armament, with a commitment to maintaining strategic relations with the United States. In its latest warnings about the deal, Washington last month expressed its concern about the possibility of Egypt buying Russian fighters, in a phone call between the foreign ministers of Egypt and the United States, according to a statement by the US State Department.

On the other hand, the Egyptian Foreign Ministry’s statement regarding the same communication did not address the American concern about the Russian deal, referring to bilateral relations and regional and international issues.

Cairo may freeze the deal

Two political analysts specialising in international relations agreed that Cairo may “freeze” the deal in light of American warnings and criticism under the new administration. Another political analyst saw that Egypt is trying to maintain the margin of maneuver in light of the complex threats to its national security, indicating that the consequences of the coronavirus crisis on the international system suggest that Russia and China are rising powers. Parliamentarians close to the Egyptian authority have previously expressed their rejection of American warnings in this regard, stressing that Egypt is “an independent state that does not allow anyone to interfere in its internal and external policies.”

In late 2019 statements to the Russian Novosti agency, a member of the Defence and National Security Committee in the Egyptian Parliament, Yahya al-Kedwani, said that Washington’s pressure violated diplomatic standards. At the time, he expected Cairo not to surrender to pressure and not change its policy to satisfy the United States, adding that Egypt did not intend to reject offers to strengthen cooperation with Russia in all fields, including the military. In August 2020, the American website Al-Hurra stated that Egypt’s insistence on concluding the deal could make it vulnerable to losing $1.3 billion in the value of the military aid it receives annually, in addition to losing its position as an ally of the United States.

Despite the American rejection of Egypt’s military orientation towards the Russians, the new US president’s administration, a few days ago, agreed to a deal to sell 168 tactical missiles to Egypt for roughly $200 million. The US Army Central Command Commander, Kenneth McKenzie, also met recently with al-Sisi in Cairo to discuss common security interests and defence relations between the two countries. For his part, professor of international law, former assistant foreign minister Abdullah al-Ashaal, expected Cairo to submit to US warnings and not move forward in concluding the Sukhoi Russian deal.

The Egyptian former diplomat clarifies that if Cairo has to choose between Moscow and Washington, it will ultimately submit to Washington because it is the political and military basis for Egypt’s successive regimes. Al-Ashaal indicates that as long as the current regime remains, Egypt will remain under US control, regardless of the arms deals with Russia monitored by the United States and Israel. Al-Ashaal also believes that the Russian fighter deal is not of equal importance to Egypt. Still, it may be of interest to al-Sisi’s regime, explaining that it may be a reward or compensation to Russia due to its bias of the Egyptian regime. He added that Russia remains insensitive to such matters. According to al-Ashaal, the American vision will not ultimately allow Cairo to escape from its grasp due to its importance to Israel and its security, as well as Washington’s fear of Russian weapons reaching Egypt in light of Moscow’s view of Washington as a major enemy.

Mohamed Hamed, director of the Eastern Mediterranean Forum for Political and Strategic Studies, agrees with the previous proposal, considering that the closest scenario is for the deal to remain frozen so that Cairo does not buy this weapon in the current period, and if there are intentions to buy it will be postponed. Hamed says that Cairo is slow to the deal, in anticipation of the decision-makers vision in Washington, especially since Egypt needs American pressure on Ethiopia in the issue of the Renaissance Dam, and to avoid criticism over human rights and in controlling regional security in the face of Turkish and Iranian extensions and relations with Israel.

In this regard, he cites what happened three years ago when Washington asked the Egyptian administration to cut its relationship with North Korea when the dispute with it was at its peak. Egypt had already responded and suspended deals that were agreed upon with the North Korean regime. Hamed also believes that there is media incitement and some American elites in the Biden administration put pressure on Cairo regarding Russian armament in addition to the issue of human rights, so that an ally like Egypt cannot buy this type of weapon and not repeat what Turkey did, which bought Russian weapons.

The Egyptian efforts to buy the Sukhois are because they are the Russian equivalent of the American plane (F-35), and as long as the United States has refrained from giving it to Egypt, it wants to control the balance of power in the region in favour of Israel. As for the Egyptian political scientist Omar Samir, he believes that the Russian deal comes within the framework of previous Egyptian efforts to diversify armament sources, especially after the American refusal to supply Egypt with F-35s. However, the USA expressed its willingness to sell it to Saudi Arabia.

Samir sees the Egyptian desire to bring Sukhoi to Russia, perhaps sending a message to Ethiopia to press for the signing of an agreement before the second filling of the Renaissance Dam reservoir, as it may be an attempt to bargain with the Biden administration, which took the initiative to press human rights issues. Samir points out that the US criticism is understandable in the context of its constant attempt to preserve its major share in the global arms market and to ensure the dependence of its traditional allies. Samir said that the previous administration issued warnings of the possibility of applying the KATSA Law to Egypt if the deal continues. Press reports stated that Cairo has already received some Russian experts.

The Egyptian regime wants to send a message that it will do no less than Ankara, which defied American warnings about the Russian S-400 deal, although they are NATO allies. According to Samir, this may also come as a protest against the US-Israeli exclusion of Egypt as a mediator in the peace process in favour of the UAE. Samir says that Egypt always tries to maintain a margin of maneuver, which is an objective right in light of the complex threats to its national security in all directions, and the consequences of the corona crisis on the international system favour the further rise of Russia and China.

Samir also believes that the US administration collects its cards in the region, and often even if it imposes sanctions on Egypt, its influence will remain limited. Washington will not intend to impose harsh sanctions so that its allies do not turn to its opponents. Samir says that the most that can happen is for Washington to stop military aid, as it did in 2014. The regime coexisted with it, adding that the Egyptian regime might get closer to its Saudi counterpart to compensate with a development aid package, which is what the UAE previously did with double compensation in 2014.

Is the Egyptian regime preparing a crackdown against social media activists?