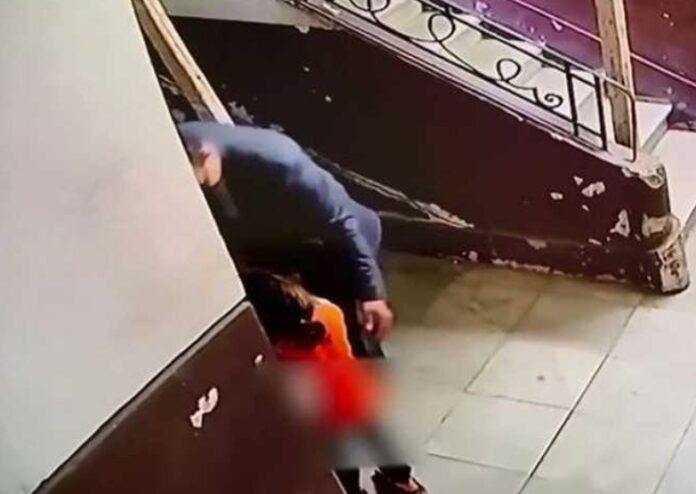 “Do not let anyone touch here (..) because this is your body (..) no one has the right to do that.” This is a song used by many kindergartens in Egypt to educate young people against any sexual abuse attempts they may be exposed to. Such small initiatives in educational institutions may help save children, but it is still not enough to stop the series of sexual abuse attempts against children. These comments came after a video clip of a man emerged as he tried to sexually abuse a girl in a building in the upscale Maadi neighbourhood.

The video shows that the man started touching sensitive parts of the little girl’s body, who was less than eight years old. Later, this man was arrested after being caught by a woman called on social media “the superhero.” Security cameras inside the building showed the man’s face clearly. This new story is much different from the folk tale that spread in Egypt over two decades ago about a man who kidnapped a girl and raped her, and then placed a stone on her stomach so that she died slowly.

Some used to say that this story is based on a real incident, and it is not permissible to mention the name of the perpetrator out of fear for his family, as he is still alive and living among his grandchildren. The story was told to young girls in schools and family councils to warn them not to trust strangers. It is not possible to ascertain whether it actually occurred or not. However, it gives a glimpse of how child sexual abuse cases are dealt with. It is usual to warn children and scare them so that they do not fall victim, while the perpetrator’s name will not be mentioned to protect his “reputation” and his family’s.

In the Maadi story, internet users took very little time to find the abuser’s personal account, pictures, and life details. The next day, the Ministry of Interior announced that the harasser had been arrested.

The actor Mohamed Henedi described the video as terrifying. He said, “The widespread video of a man molesting his innocent child is terrifyingly terrifying, and I do not advise anyone to watch it, and the only good thing is that it showed a monster from among the many monsters that live among us behind plastic faces that hide more ugly characteristics than we can imagine.” Henedi added, “I hope that the harasser is arrested immediately, whoever he is. Thank you to the Egyptian police for promptly arresting him. May God protect us and protect you.”

Football player Sherif Ekrami also stressed the need for deterrent punishments for all harassers. Ekrami wrote: “Child molestation is not just a sexual issue. It is a filthy crime against humanity, the ultimate psychological and physical destruction for life.” He added, “Sympathy with him and justification for what he did is ignorance. A deterrent punishment is the only way to protect our children.”

Al-Azhar also interacted with the issue when, through the words of the Islamic Research Academy, it called for punishing the harasser. Al-Azhar said in a blog post: “Child molestation is an unpleasant phenomenon that is contrary to humanity, peace, chivalry, and perfection of manhood.” Al-Azhar called upon society to tighten monitoring and reporting of harassers, to educate children about their criminal acts, and to raise awareness of the crime of harassment as a shameful behaviour that needs to be dealt with strictly. Azhar also called for confronting this phenomenon “through school curricula and addressing it in the media and social media.”

Dar Al Iftaa also commented on the incident and said: “Sexual harassment of children is a major sin that avoids all normal sins, and the guardians have to deal with this heinous crime with firmness and decisiveness.” Despite this apparent change in the manner of dealing with child sexual abuse cases, it is still a taboo issue. Moreover, the main pillar of limiting them, represented by-laws, has not changed much over the past two decades.

These crimes are continuing and may appear legally under the name of the phenomenon of “underage marriage,” which has high rates in Egypt, about 17 per cent, according to the statistics of the United Nations Development Programme for the year 2016. Despite the scale of these crimes and the horrific commission of them, silence, blaming the victim, and outdated laws are among the reasons that allow them to spread.

Feminist activist Samira Abdelkader says, “Societies suffer from a problem of denial in such issues, and they still live in a state of chaos.” She points out that a deterrent law is one of the important ways to reduce these crimes. And she warns that some laws allow impunity for the perpetrator. Samira explains that it is necessary to teach sexual education to children in schools so that they are sufficiently aware of any sexual offense that may happen to them. She adds, “Many children have been abused by relatives or otherwise, but the child does not know that he was a victim of sexual abuse.” While the family may try to punish the victim and keep silent for fear of shame, children must be educated at the school level. And remember that the media and social media are a reflection of the nature of society.

Samira adds: “In Egypt, for example, if you watched a movie from the sixties of the last century and a recent movie, you would notice a huge difference between the two sides in terms of morals and film culture.” “Harassment and rape have become a topic for comedy nowadays, and the media are no better off,” stresses the activist. However, social networking sites recently had a role in “breaking the ice,” as Samira called it, through feminists and those interested in women’s and children’s rights.

Suicide in Egypt: Scary statistics due to a deteriorating economy