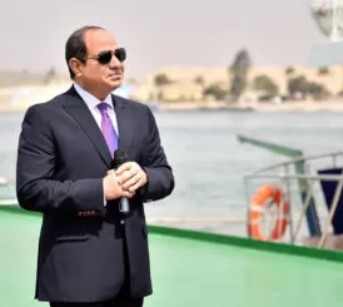 In a sharp tone, General Abdel Fattah Al-Sisi threatened, a few days ago, instability if Egypt lost any of its share of the Nile water. He considered that a red line. His statements raise questions about Egypt’s ability to carry out a military operation against the Grand Ethiopian Renaissance Dam (GERD) that Addis Ababa is building.

In televised statements, Al-Sisi said, “The waters of the Nile are a red line, and we will not allow our water rights to be compromised, and any prejudice to Egypt’s water will have a reaction that threatens the stability of the entire region.” He added in a threatening tone: “No one can take a drop of water from Egypt, and whoever wants to experiment must approach (our waters).” Given that Egypt’s military capacity is greater than its Ethiopian counterpart, according to the figures, a logical question arises: Would the Egyptian Air Force be able to launch a military strike against the GERD?

The military and strategic expert, Major General Fayez Al-Duwairi, says that Al-Sisi’s statements “were a clear and strong warning to Ethiopia.” He pointed out that this message coincided with practical military action. Egypt and Sudan conducted the “Nile Eagles 2” military maneuvers.

The training, which is called Nile Eagles 2, took place with the participation of groups of air forces and Thunderbolt forces from the two countries and was aimed at “measuring readiness to carry out joint operations on various objectives.” He points out that there was a popular and military mobilisation before those statements, specifically during the “Martyr’s Day” celebrations in Egypt, which revolved around the Egyptian armed forces, its ability, and its “long arm.” He clarifies that what is important in the recent maneuvers is the scenario in which the Egyptian and Sudanese forces are training, as it indicates Egypt’s military capabilities that will target the GERD if there is military action.

Al-Duwairi says that this scenario includes focusing on the air force, whether using interceptors or ground-attack aircraft, as well as the use of special forces commandos. He stresses that Egypt’s military capabilities and options concerning the GERD are limited to air force use.

It is noteworthy that Egypt prepared for this by purchasing French Rafale aircraft and Russian Sukhoi 35 aircraft, which can carry nine and a half tons of explosives and can fly up to 3,700 kilometres. Al-Douairi says that Egypt can hit the Renaissance Dam independently, without using Sudanese military capabilities. He claims that using the Berenice military base, which is 1,800 kilometres from the dam, makes this possible.

Since the operational range of the aircraft is 1,600 kilometres, the Egyptian planes can reach the Renaissance Dam and bomb it if they reduce their load in favour of increasing the capacity of the fuel tanks. Rafale and Sukhoi 35 jet fighters will be in the protection of the MiG-29 aircraft, which will play an interception role. Al-Duwairi further explains that Egypt could also use the Sudanese Marwa base to carry out this strike if Sudan participated.

Despite all this, the Egyptian military expert affirms that the possibilities of using force on the issue of the Renaissance Dam “are still low” and that Egypt “still has other political and economic pressure cards that it may use.” He called for parliament to reject the principles agreement signed by Egypt with Sudan and Ethiopia in 2015.

This is largely Sudan’s opinion. The former minister, Osman Eltoum, expressed that by saying that water disputes “cannot be resolved by armies.” Eltoum asserts, “Armies are used as a form of pressure, but in the end, water disputes are not resolved by armies. Negotiations over the GERD are solved by negotiation only.” The former Sudanese minister expresses his optimism that the crisis of the second filling of the Renaissance Dam can be solved by negotiation, and with the presence of officials from the United States and the European Union in negotiations with the three countries, Egypt, Sudan, and Ethiopia, with the aim of reaching a final solution to the Renaissance Dam crisis.

Since 2011, Egypt, Sudan, and Ethiopia have been negotiating to reach an agreement on filling the GERD, and Cairo and Khartoum have feared the implications of this. Egypt and Sudan called on Ethiopia to postpone its plans to fill the dam reservoir until a comprehensive agreement is reached. However, on July 21 2020, Addis Ababa announced that it had completed the first phase of filling the reservoir with a capacity of 4.9 billion cubic metres, which allows testing the first two pumps in the dam. It also confirmed its intention to implement the second phase of filling the dam lake in July.

Coronavirus infections in Egypt exceed China for the first time