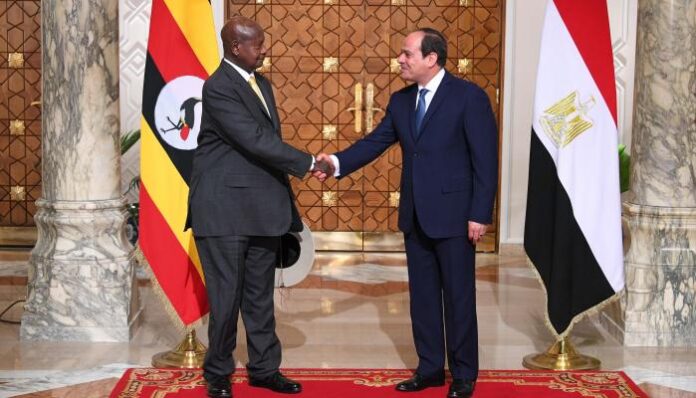 Uganda announced late on Wednesday that it had signed an agreement with Egypt to exchange military information. This agreement came in light of Egypt and Ethiopia’s escalating tension over the Grand Ethiopian Renaissance Dam (GERD) to generate hydroelectric power on the Nile River’s tributary. According to a statement issued by the Uganda People’s Defence Force (UPDF), the agreement was concluded between the Egyptian Intelligence Service and the Ugandan Defence Force Military Intelligence Headquarters.

Major General Sameh Saber Al-Degwi, a senior Egyptian intelligence official who headed the Cairo delegation to Kampala, said that Uganda and Egypt share the Nile, which makes cooperation between the two countries inevitable. This comes in conjunction with Abdel Fattah Al-Sisi’s warnings about the dangers of conflict due to the Renaissance Dam that Addis Ababa is building on the Blue Nile, one of the Nile’s tributaries.

Ethiopia relies on the dam to boost its ability to generate electricity and advance economic development, but Egypt fears the project will endanger its freshwater supplies. Egypt announced the failure of the ministerial meetings in Kinshasa between Egypt, Ethiopia, and Sudan. The sessions were held for three days in search of consensus on a mechanism for resuming negotiations on an agreement to fill and operate the Renaissance Dam.

Although differences are widening between the Ministers of Foreign Affairs and Irrigation in Egypt and Sudan on the one hand, and Ethiopia on the other hand, the President of the Democratic Republic of the Congo announced reaching compromises that ensure that the concerns of each party are met.

1.8% of Egyptian employees use drugs