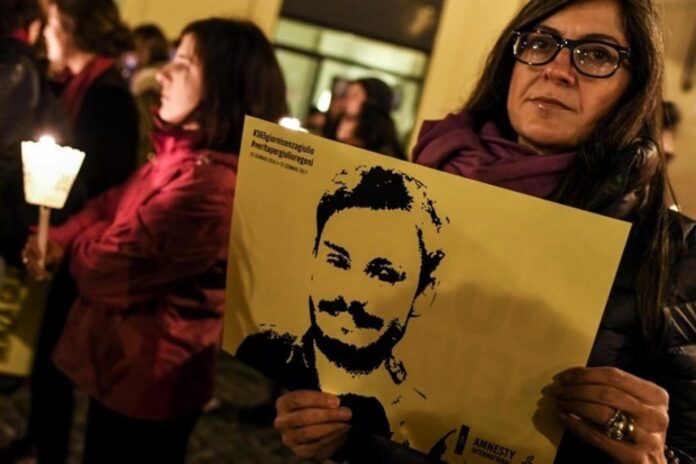 Italy’s attorney general intends to add three new testimonies over the murder of the Italian PhD student, Guilio Regeni, who was killed in Cairo five years ago, to existing evidence.

The testimonies will be disclosed in the court hearing on April 29, according to the Italian news agency ANSA.

One of the new witnesses talked to an Italian diplomat in Cairo and said that he is a friend of the head of the street vendors, Mohamed Abdullah, who reported on Regeni, according to a previous statement by Egypt’s attorney general. The witness said that he knew that Egypt’s security services decided immediately after Regeni’s murder to hold an armed gang responsible. The witness said that he met Abdullah on February 2, 2016, one day before finding Regeni’s body. Abdullah was afraid when he told the witness that he was in the National Security’s headquarter in Dokki and knew that Regeni died.

The police declared on March 24, 2016, that five people were killed in an armed confrontation, and that the police found personal items belonging to Regeni in one of their houses. The police accused the group of carrying out armed robberies against foreigners, and Regeni was one of the victims of this group, but after recurrent refutations against this story, the attorney general denied it on December 30, 2020.

Regeni, 28, disappeared on January 25, 2016, near Al-Buhouth Metro in Cairo, before his body was found beside a highway near Cairo on February 3. The initial medicolegal report said that Regeni was tortured for days, and he was killed after his cervical spine was broken. Regeni was in Cairo conducting research into street vendors as a part of his studies at Cambridge University.

Bar association calls for strike protesting the targeting of lawyers

Lina Atallah: A journalist arrested without charge and released after foreign...