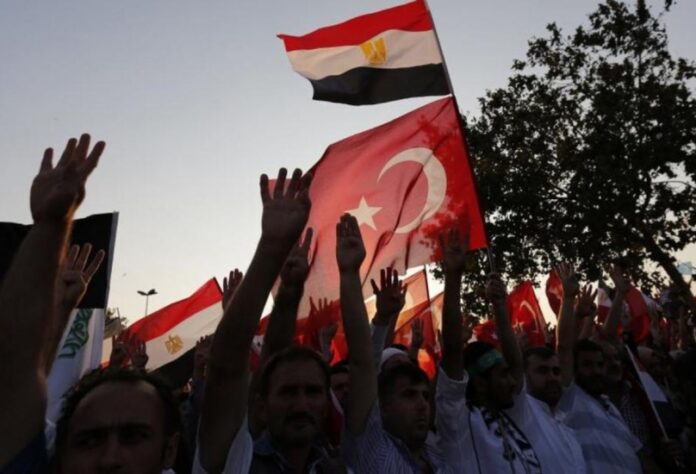 After five years of living in exile, Abdel Rahman Mohamed does not hide his longing for returning to Egypt, but at the same time he is currently residing in severe anxiety that he may find himself obliged to return to his country. The fears of hundreds of Egyptian political opponents residing abroad that they would be forced to return to Egypt have increased, especially in light of the Egyptian-Turkish rapprochement. Returning home is a dream for every citizen living abroad, but for Egyptian dissidents abroad, returning to Egypt is a nightmare. Several journalists and dissidents were arrested at Cairo Airport upon their return home.

Egyptian journalist Abdel Rahman says he is quickly looking for a new country in which to stay: “I am afraid that my residence in Turkey will not be suddenly renewed in light of the recent changes,” he says. Abdul Rahman works for an opposition satellite channel. The Turkish authorities informed the opponents’ satellite media administrations about changing their editorial policies and stopping the attack on the Egyptian regime. Two opposition channels were forced to stop their most famous political programmes and others began to amend their editorial policy.

Abdel Rahman points out that the Qatari authorities have previously asked opposition leaders to leave the country to achieve reconciliation with the Egyptian regime: “I don’t want to find my wife and son without a place to live.” Abdel Rahman is not wanted in connection with any political issue. However, in June 2019, the Egyptian authorities arrested the 43-year-old journalist Hisham Abdel Aziz, from Cairo Airport, upon his return to spend his annual vacation in Egypt. Hisham’s imprisonment has since been renewed continuously. Hisham suffers from serious health problems and the possibility of losing his eyesight.

Abdel Rahman says that his health condition would not tolerate one month in detention. “I live on a lot of different medicine for chronic diseases.” Abdel Rahman reveals his plans, saying, “I am currently looking to travel to a European country. Even those who travelled to South Korea had to leave later.”

Journalist Mohamed Nasr ruled out in a video clip the possibility of his deportation from Turkey. But at the same time, he indicated that he could leave Turkey so that he can continue to fulfill his mission. The Egyptian accountant Ahmed Taha says that he also became afraid of the possibility of his deportation to Egypt in light of the news of the Egyptian-Turkish reconciliation. Ahmed Taha is accused in a political case in Egypt and there is a warrant out for his arrest. This makes it difficult for him to travel to another country. Taha (not his real name) says he is anxiously following news of reconciliation, knowing he has no alternative place to go.

The news of Egyptian-Turkish reconciliation raised fears of many political opponents residing in Turkey that they could be deported. Turkey is the essential destination for Egyptian dissidents who fled Egypt after the July 2013 coup. In the years following the military coup, the number of Egyptians residing in Turkey increased. Many of the Egyptian opposition in Sudan and Qatar left for Turkey due to changing political conditions or reconciliation.

Egyptians reside in Turkey with temporary residence documents that are being renewed on an exceptional basis. Stopping the renewal of these documents means that they are likely to return to their country. The passports of dozens of young people residing in Turkey have expired.

However, Egyptians in Turkey are not the only ones afraid of the expected return to their countries. In the USA, Rasha Badawi does not hide her concern that she will be forced to return to Egypt. Rasha Badawi is a co-founder of the 6th April youth movement. She was managing the Facebook page of the movement in the province of Dakahlia. Rasha, who lives alone with her son and daughter, says she is afraid of her fate and is also afraid of what her children might be exposed to.

Egyptian security forces arrested Egyptian-American citizen Reem Desouky at Cairo International Airport in July 2019, after she arrived from Washington, accompanied by her 13-year-old son. Security forces accused Reem of running a Facebook page critical of the Egyptian president, and she was placed in a women’s prison outside Cairo. Later, Reem’s brother was arrested during her visit to the prison.

In May 2020, the security forces released Reem. The Egyptian government allowed Reem to return to Pennsylvania. The court’s decision, expected in July, is Rasha’s final case. The opposition activist has begun counting the days and nights and preparing for that session intensively.

Academic professor Ahmed Abdel Basset from New Jersey had previously been presented with a similar position. Abdel Basset was in danger of being deported from the United States after police forces arrested him. The police told him that his political asylum application had been rejected. But months after his arrest, a US judge issued a ruling granting him political asylum. Ahmed has obtained permanent residency and is currently awaiting US citizenship.

Rasha hopes her luck in court will be as happy as Abdel Baset’s. “I have no alternative place to travel to,” she says. Rasha is unlikely to choose to return to Egypt, but at the same time, she does not have alternative options. Some of her friends are trying to find a legal way to allow her to reach Canada or any European country if her request is rejected. But any such option means that Rasha will have to start again from scratch. “I built my life and the lives of my children here” she says. “However, starting from scratch is better than the unknown in Egypt.”

How did the Egyptians pay for the new administrative capital?