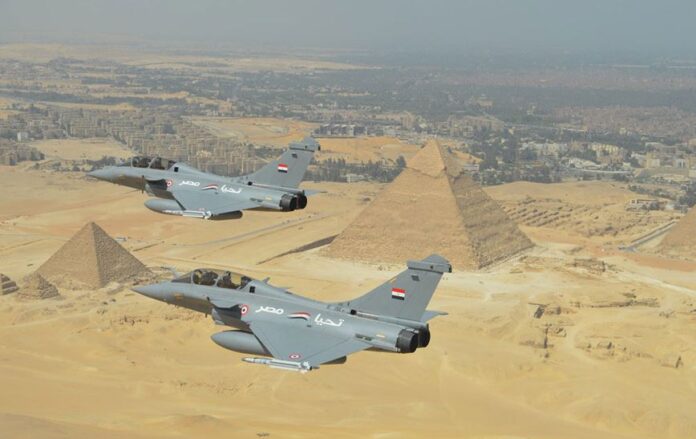 Egypt is seeking to have the strongest army in the region, as seen in the Cairo announcement that it is purchasing 30 new French Rafale aircraft. Nevertheless, the reality indicates that Cairo will accumulate debt in exchange for a result that will not be achieved.

Last week, Egypt announced the signing of an agreement with the French government to purchase 30 Rafale aircraft through a financing loan for a minimum period of 10 years.

The renewal of the relationship with Egypt was the mantra of the Elysee, afraid of losing the main customer of the French arms industry between 2014 and 2018 and turning to Italian, Russian or German competitors. Negotiations have been underway for nearly two years to sell helicopters, satellites, and combat aircraft, so that Dassault Company will finally win the sale of 30 Rafale aircraft, in addition to the 24 aircraft it sold in 2015.

According to a French Ministry of Defence statement, the value of the deal is 4 billion euros ($4.80 billion). Deliveries are supposed to start three and a half years from now, extending from 2024 to 2026, without including the transfer of technology to Egypt. The talk about the deal was met with celebrations in the media loyal to Abdel Fattah Al-Sisi’s regime, as it is an Egyptian deterrent force, placing it in the ranks of major countries and armies. Still, the details of the contract and the deal reveal the opposite. All the new aircraft, which will be delivered to Egypt from the F3-R, are the most advanced in service currently. However, it will soon be replaced by (F4) in France in 2024 or 2025, Egypt will not have the most advanced model.

Also, these aircraft will not be equipped with the (Meteor) air-to-air missile, which is a crucial component of the (F3-R), with a range of more than 150 kilometres. Meteor enables it to destroy most aircraft in service in the Middle East and Africa, except an aircraft (F-35). Only Israel is equipped with the F-35. It was expected that the entry of the Meteor missile into Egypt would be a strong message to its neighbours. However, that did not happen, making the planes less efficient and effective than what is being promoted in the media. Underestimating the importance of the deal is that Egypt already has 24 aircraft of the same type, according to an agreement it signed with Paris in February 2015.

The noticeable thing is that the huge deal contradicts the trends of the global arms market customers, who prefer the possession of drones equipped with missiles, especially the Turkish models, which had a decisive role in Libya and Syria and on the borders between Armenia and Azerbaijan. The deal doubled the Egyptian bill of losses too. It imposed more high-interest loans, putting pressure on the exhausted Egyptian economy from the ground up instead of directing them to priority files such as health, transportation, and education.

According to a French official, the financing arrangement contract includes guarantees from the French government. With it, the banks, BNP Paribas, Credit Agricole, Societe Generale, and CIC, will guarantee 85 per cent of the financing of the deal. According to the annual report of the French parliament, Egypt’s total imports of French arms between 2010 and 2019 amounted to about 7.7 billion euros, which makes Egypt the fourth country in terms of purchasing arms from France.

However, there is a positive aspect in favour of the Sisi regime, which is creating pressure circles in several European capitals, enabling it to pass its policies against the opposition in general, and political Islam movements in particular. It also serves his foreign agendas in Libya and elsewhere.

According to the Egyptian academic Ahmed Sarhan, the Sisi regime may achieve political and diplomatic gains from behind the deal. Still, in the language of money, the deal represents a great burden on the Egyptian financial portfolio, which is burdened with a foreign debt of up to $130 billion. “Egypt seeks to emerge as the main armed force in the region, especially with air power. But it is still far from being able to compete with the Emirates and Saudi Arabia, not to mention with its neighbour Israel. These countries have unified fleets, unlike Egypt,” he added.