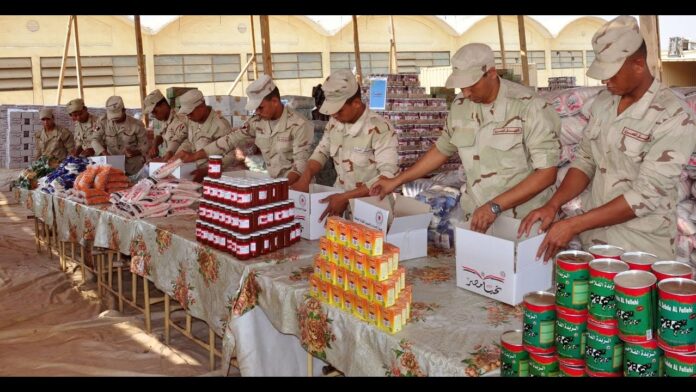 The announcement by the Minister of Planning and Economic Development Hala Al-Saeed of the sovereign fund’s intention to sell shares in two companies owned by the army for the benefit of the private sector has raised many questions.

The announcement remained vague without disclosing the names of the two companies or the expected buyer. The news recently revealed that two Emirati companies might be potential buyers.

The UAE has turned to the education sector and has purchased many private schools operating in the field of international education, in addition to its remarkable expansion in the banking and financial services sector. It also has a substantial presence in Egyptian port services and management and the Gulf of Suez projects.

In light of this, the Political Fund announced that the two companies offered for the benefit of the private sector are the National Petroleum company and Safi company of mineral water. The two companies operate in consumer goods, and their products represent essential commodities that cannot be dispensed with. Therefore, they are profitable companies, especially in light of the military’s monopoly over many of the components of the Egyptian economy.

It was interesting to consider the minister of planning’s announcement that offering companies on the stock exchange would come at a later stage. It means that the sale process will be through selecting specific companies from the private sector. This announcement coincided with news that the UAE company, ADNOC, had studied the purchase of a stake in the Wataniya Petroleum company. It had recently been announced offering a share of it to the private sector. If this step is completed, it would mean opening the way for the UAE, as a state or a private sector, to enter into ready and profitable projects in Egypt. It can make profits for its investments from the first moment of the ownership transfer process.

According to observers, neither the government of Abdel Fattah Al-Sisi nor his sovereign fund learned from the experience of privatisation, which took place in Egypt during the era of former President Hosni Mubarak, since 1991, when the regime wasted the capital assets of the public business sector companies as they were trafficked from buyers for the benefit of foreign companies. The result was that privatisation proceeds were spent in non-productive aspects, and the national economy was not compensated with alternative capital assets.

Under Mubarak, the privatisation revenues for about 365 companies amounted to EGP 50 billion, part of which was consumed in filling the budget deficit, a second part in the restructuring of public business sector companies, and the last part in the cost of early retirement for workers affected by the privatisation programme.

Here, Mohamed Al-Saeed, a financial expert, asks: “Why were their shares not offered on the stock exchange for the benefit of small savers in Egypt?” He adds, “One of the big mistakes committed against future generations is the waste of capital assets through privatisation programmes, without replacing the economy with new capital assets.” Al-Saeed added: “Instead of Sisi giving the UAE or other foreign investors a hugely profitable operating company, he should have offered real partnerships with the foreign private sector to establish productive projects in the field of agriculture and industry or the production of technology.”

However, researcher in economic affairs, Suhair Abdel-Aal, believes that this step may aim to improve the image of the army, which indicates its control over the joints of the civilian economy. She added: “We also do not forget that one of the conditions of the International Monetary Fund is the privatisation of 23 public institutions and companies.”

According to observers, the financing situation of the Sisi government has been in dire straits since 2013, and therefore it resorted to expanding borrowing. However, the way out of this crisis is not by granting the profitable companies to foreigners, as the foreigners’ bill in Egypt has become remarkably large. Balance of payments data for 2019/2020 indicates that profits from foreign investments in Egypt this year amounted to $12.2 billion.

It is feared that the pressure of Sisi’s government of financing insufficiency is the incentive to sell companies in favour of the foreign private sector, obtain financing in hard currency, meet the requirements of debt burdens, or provide part of the financing of the budget deficit.

In light of the law governing the operation of the sovereign fund in Egypt, privatisation will occur without real oversight, given the protection of the fund’s practices and its non-compliance with all regulatory agencies, including parliament. Sisi remains the reference for all the fund’s operations strings.

Likewise, civil society institutions in Egypt will not be able to follow up the privatisation processes of the military companies to find out their actual financial position, nor the sales contracts for the shares established. And since the sale will not be through the stock exchange, the matter will be between the parties to the contract, the sovereign fund, and the private sector in whose favour the regime will conclude the deal.