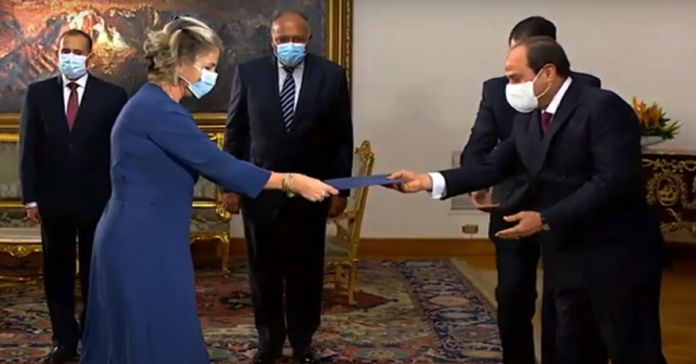 The Egyptian Foreign Ministry summoned the Israeli ambassador in Cairo, Amira Oron, in protest over “the recent violations in Jerusalem.”

According to a statement by the Egyptian Foreign Ministry, Ambassador Nazih Al-Najari, Assistant Minister, held a meeting on Sunday with the Israeli Ambassador, Amira Oron.

Ambassador Hossam Ali, Director of the Israel Administration, joined the meeting. He emphasised Egypt’s stance during the meeting, rejecting and denouncing the Israeli authorities’ storming of the blessed Al-Aqsa Mosque.

According to the statement, the Israeli ambassador was asked to convey a message to Israeli officials stating the need to provide protection for worshipers so that they can pray in safety and freedom. It also asked Israeli authorities to assume their responsibilities and control the security situation in Jerusalem.

Settlement groups announced the implementation of a major raid on Al-Aqsa on Ramadan 28, on the occasion of the so-called Hebrew Jerusalem Day, when Israel occupied East Jerusalem in 1967.

The Arab League held an emergency meeting at the level of foreign ministers in Cairo on Tuesday, May 11, to discuss developments in Jerusalem. The Palestinians maintain that East Jerusalem is the capital of their desired state, based on international legitimacy resolutions, which do not recognise Israel’s occupation of the city in 1967 nor its annexation in 1981.

Ambassador Ahmed Hafez, the official spokesman for the Egyptian Ministry of Foreign Affairs, affirmed in a statement the complete rejection of any illegal practices aimed at undermining the legitimate and inalienable rights of the Palestinian people. The spokesman condemned the current efforts to displace Palestinian families from their homes in the Sheikh Jarrah neighbourhood in East Jerusalem, which constitutes a violation of international legitimacy and international humanitarian law.

With a value of EGP 21 billion: 16 governmental bodies suffer...

Egypt: Sharp decline in the performance of the non-oil private sector