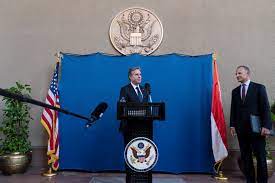 Washington says it plans to engage in a “constructive” human rights dialogue with Egypt as rights groups and activists continue to draw attention to Egypt’s human rights abuses.  This latest call came after a recent report by Washington-based rights group The Freedom Initiative, which found that “Egypt’s widespread and systematic campaign of arrest, imprisonment, and abuse reaches Americans on their soil.”

At least 11 Americans, including American citizens, legal permanent residents, or resident visa holders, were wrongfully detained in Egypt during 2020. Five remain in prison, and at least three are banned from travel. Research by The Freedom Initiative also documented more than a dozen cases of American citizens whose immediate family members were held in detention during 2020, in a pattern of reprisals against critics who are living in the United States.

It comes amid concern over the uncertain condition of jailed American citizen Khaled Hassan, who is expected to be released soon. Hassan, an Egyptian-American limousine driver, has been detained in Egypt since January 2018. He was accused of joining a terrorist group – an allegation deemed as not credible – and Human Rights Watch says he has been tortured and raped in custody.

Last Wednesday, US Secretary of State Antony Blinken said the US and Egypt have agreed to engage in a constructive dialogue on human rights issues. Blinken met Sisi on May 26, two days after the first phone call between US President Joe Biden and the Egyptian General.

Some analysts say a human rights dialogue between the US and Egypt is unlikely to yield real improvements in rights conditions on the ground in the country. Blinken pressed for the release of wrongfully detained Americans during his meeting last week with Sisi. Senior US officials said there was an hour of discussion on human rights issues. “Concerning Americans who are detained, first let me say that we remain deeply saddened by the needless death in custody of Mustafa Kassem,” Blinken said to VOA. Kassem died of medical neglect in the Egyptian prison on January 13, 2020. “I certainly raised this [the release of wrongfully detained Americans] in my meeting today, and we’ll continue to do so until Americans are reunited with their families,” the top US diplomat pledged.

The State Department, in its 2020 annual report on Human Rights, listed significant human rights abuses in Egypt that include unlawful or arbitrary killings, forced disappearance, harsh and life-threatening prison conditions, arbitrary detention, politically motivated reprisals against individuals located outside the country, as well as serious restrictions on free expression, the press, and the internet. In 2013, Sisi led a military coup against Egypt’s first democratically elected president and positioned himself as the undisputed leader, crushing opposition despite criticism by human rights groups.

COVID-19 exacerbates the suffering of detainees and their families

Egypt: Broad solidarity with the village protests against al-Sisi