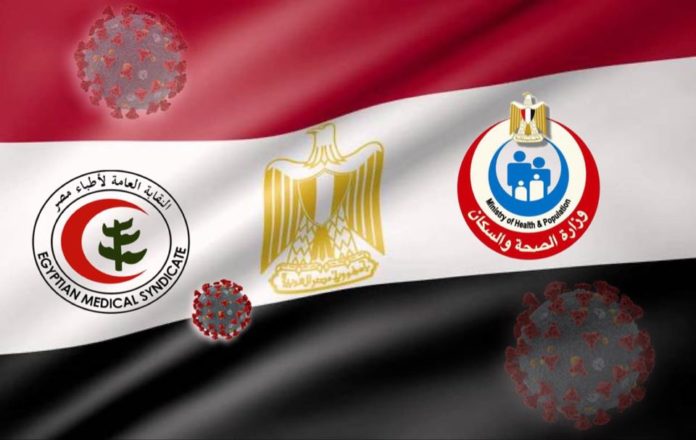 “Our martyrs have gardens, and their martyrs have salary increases, exceptional pensions, bonuses, apartments, pilgrimages, and jobs for their families.” A doctor depicted By these words the Egyptian regime’s discrimination between compensation for doctors’ victims as a result of Corona and victims of armed operations from the army. According to what the Egyptian Medical Syndicate announced, the number of Egyptian doctors who died due to infection with the virus reached 555. A number is expected to increase in light of the lack of medical, social, and insurance protection for doctors.

The President of Ain Shams University, Dr. Mahmoud El-Metini, had announced the allocation of 2,500 acres for the work of the first botanical garden at the University’s Faculty of Agriculture; In honor of the martyrs of the White Army, it includes 200 fruit trees of different types “mango, pomegranate, orange, persimmon, lemon, raspberry, and others.” The University will name these trees on the martyrs’ names in honor of their memory, and ongoing charity will be given to their lives that they sacrificed to save those affected by the (Covid-19) pandemic, Al-Matini said in press statements.

Doctors mocked these steps, for Mahmoud Talaat to express the feelings of sadness that turned into a mockery of the form of honor, which took place between a number of his colleagues in the government hospital in which they work, and the quick comparison that jumped into the doctors’ minds with what the army and police martyrs receive. Talat says that they do not object to the great advantages that the martyrs of duty received from the army and the police, as this is their right, “but our fellow doctors are also martyrs of duty and their role in protecting the homeland and citizens from the damned pandemic is no less than others, and they deserve every honor and benefits for their families as well.”

Fadi Samir, a doctor who works in one of the isolation hospitals, says that he saw his colleagues falling prey to the “Corona” virus before his eyes. They performed their duty with dedication and steadfastness, among them young people who did not have anything from the world except their salaries and left behind wives and children who only have their Lord and no pension blocking their throats. Samir asked: “Do these people not deserve exceptional pensions for their children and families?” Shouldn’t a fund be established as a fund to honor the martyrs, missing persons, and victims of security and terrorist operations?

As doctors, Samir continues, do not ask for honor or fame or a monument to commemorate the names of our martyrs. We know how to immortalize their names, heroism, and heroic sacrifices to save patients and prevent the epidemic from spreading. Still, we want to be assured of the fate of our children if we face death, which we do not fear as much as we fear the fates of our families.

For her part, former Doctors Syndicate member Mona Mina says: “For more than a year I have been speaking, and many sane people have spoken, about the need to pay attention to this unprecedented rate of deaths of doctors and medical staff, and about the need to strengthen means of protection and try to stop this bleeding, but unfortunately we do not find who listens or cares.” She adds, “Even with the provision of the vaccine, we find that doctors on the job are told when they request the vaccine (register on the site), and they are late in taking the vaccine, while healthy young people in their twenties have already taken the vaccine before many members of the medical team.”

Mina refused to comment on the Martyrs’ Park proposal and stated: “Why was the inclusion of the martyrs of doctors in the Martyrs Honor Fund refused, and we find that the families of the martyrs are suffering severe suffering just to obtain the legal right to the work injury pension.” She added, “Our martyrs, doctors, do not need a garden to commemorate the memory, but rather they want to implement the decision to increase the infection allowance, which was approved by the House of Representatives and then Abdel Fattah Al-Sisi since last July (11 months).”

The government had approved an increase in risks from 19 to 1,225 EGP (the dollar is less than 16 EGP), although the infection allowance for judges who do not deal with patients every moment amounts to 3,000 EGP. It is noteworthy that the government and the House of Representatives rejected the demands of the General Syndicate of Physicians to equalize the victims of (Covid-19) doctors, nurses, and paramedics with the victims of officers and members of the army and police by including the provisions of the Fund for Honoring the Victims, Missing and Victims of Terrorist and Security Operations.

Al-Sisi said in one of his statements regarding the victims of the medical sector of the Coronavirus: “The doctors’ right is with our Lord… We can not give them anything.” This statement prompted the Medical Syndicate to invite its members to donate for the benefit of the injured and the families of the deceased doctors, which caused widespread disagreement among the members. Member of the Medical Syndicate Council, Ihab Al-Taher, believes that collecting donations is not appropriate for the martyrs of doctors, which is an insult to the state because it is a genuine duty for the state to do.

At a time, Doctor Muhammad Al-Badrawi wonders: “Isn’t the doctors’ resistance and the response to Corona considered a war?”, adding that “Al-Sisi directed the deduction of part of the tickets for matches, theaters, amusement parks, car licensing fees, and others, to honor the families of the victims of the army and the police.” Badrawi stressed that the doctors who were martyred in the face of Corona deserve the same honor, as they do not receive compensation while they are alive. This happens while they are at the center of the confrontation, while we find in other groups that they do not move from their offices and take thousands under the name of infection compensation.

A new IMF deal: Are things getting worse?