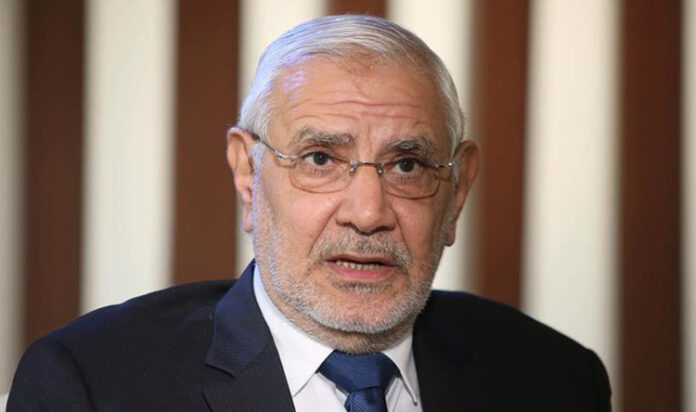 Aboul Fotouh, who spent three years and five months in pretrial detention, called for help late in the night with no response. The guardian of his ward contacted the superiors, who refused to help.

Huzeifa added on Facebook that his father was deprived, over the eight days holiday of Eid El-Fetr, of the analgesics he needs for spinal pains. Aboul Fotouh needs such medications for a disc prolapse he had three years ago. Huzeifa emphasised that his father is left to suffer in solitary confinement and denied of medical care.

Aboul Fotouh, 70, was arrested on 14 February 2018, days after he came back home from London, where he conducted TV interviews criticising Abdel Fattah Al-Sisi and his authoritarian regime in Egypt. Accordingly, Aboul Fotouh’s pretrial detention was supposed to end in February 2020 as he finished the maximum amount of time he is allowed to be kept on remand, but the Egyptian authorities refused to release him.

Lawyer Ahmed Aboul Ela Mady said that the Supreme State Security Prosecution ordered his client, Aboul Fotouh be released, but on the same day he was inserted in a new case in detention, a mechanism known in Egypt as “revolving,” to circumvent the maximum pretrial detention.

Patients in Egypt suffer from a shortage of expensive medication