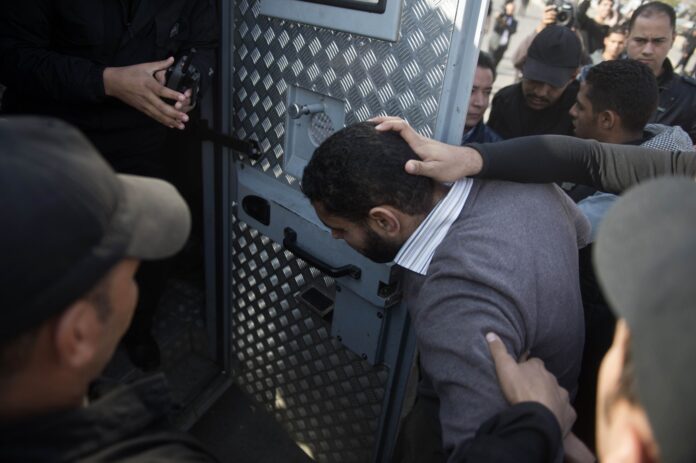 Weeks ago, security forces arrested the well-known historian and researcher Alia Muslim, upon her arrival at Cairo Airport as she returned from Berlin, where she is completing her post-doctoral research at the Alexander von Humboldt Foundation.

Officers from the National Security confiscated Muslim’s phone, prevented her husband and children who were accompanying her from seeing her, and detained her for 17 hours at the airport, where she was interrogated several times, then transferred her to the headquarters of the Supreme State Security Prosecution in the Fifth Settlement neighbourhood in Cairo without notifying her family of the reason. Muslim was released later without any further explanation.

This is not the first time Egyptian academics have been arrested after returning to their homeland. This comes within the continuous approach of the regime of President Abdel Fattah Al-Sisi to restrict academic freedoms and the independent academic community, whose members are being targeted in many different forms.

At home or abroad

Many Egyptian researchers studying abroad were arrested after arriving in their home country for example, researcher Ahmed Samir, a master’s student at the Central European University, who was arrested last February, days after returning from Austria for a short holiday in Egypt, to end up with a final sentence of four years in prison, on charges of “spreading false news from outside the country” about the internal situation.

Researcher Patrick George has been detained since February 2020, after he was arrested upon his return from Italy on a short vacation, where he is studying for a master’s at the University of Bologna. The accusations filed against him were the same as for almost all opponents, which are “spreading false news, incitement to demonstrate without a permit, and an attempt to overthrow the regime.”

This coincides with the persecution and abuse of academics residing in Egypt. Researcher Kholoud Said Amer, head of the translation unit at the BA Publications Department, who was arrested in April 2020 and forcibly disappeared for seven days before appearing before the Supreme State Security Prosecution, was accused of “joining a terrorist group and spreading rumours and false news,” and she is still on pretrial detention.

In June 2020, Dr. Ahmed El-Tohamy Abdel Hai, Professor of Political Science at the Faculty of Economic Studies and Political Science at Alexandria University, was arrested because of his academic work, and was subjected to enforced disappearance for 17 days before his appearance before the Supreme State Security Prosecution, which charged him with “joining a terrorist group, publishing false news and statements, and misusing social media” and ordered his detention. He has been held without trial ever since.

The restrictions on independent academics include preventing them from travelling. On May 24, Walid Salem, a doctoral researcher at the University of Washington, was prevented from travelling for the second time, and he was informed that his name would be included on the lists of those banned from travelling issued by the Attorney General on the previous day, May 23, without giving clear legal reasons or a specific period for the travel ban.

The restriction on academic work is not limited to targeting researchers with arrest, intimidation and a travel ban, but it is much more than that. The matter now amounts to blatant security interference in the appointment of university leaders, the cancellation of scientific theses for political reasons, and the interference of educational authorities in the freedom of research and teaching.

One of the fruits of the January 25 2011 revolution was the issuance of a decision by former President Mohamed Morsi allowing members of educational bodies to elect university deans and presidents themselves, which formed a push for the independence and freedom of academic work in Egypt. However, President Sisi, days after coming to power in 2014, rescinded this decision and returned the authority to appoint deans and university presidents to his hands.

In October 2015, Al-Azhar University cancelled the discussion of a PhD thesis of a researcher at the Faculty of Islamic Studies, and asked her to return the thesis while changing its subject, which dealt with the jurisprudential adaptation of revolutions. The university referred her supervisors for investigation. Dr. Tawfiq Nour El-Din, Adviser to the President of Al-Azhar University for Graduate Studies, attributed the cancellation of the doctoral thesis to addressing a topic that contains “excitement” and is “inappropriate.”

Also in 2015, Suez Canal University wrote off two scientific theses in the field of political science. The first dealt with: “Democracy between Thought and Practice of the Muslim Brotherhood and the Salafis: An Analytical Study of the Freedom, Justice and Nour Parties,” while the second dealt with: “The Muslim Brotherhood and the Egyptian People’s Assembly elections 2005.” University officials justified the decision as contradicting the two messages with the “public order of the state” and “the provisions of the judiciary,” with the main supervisor of the two messages stopping him from teaching and referring him to investigation.

All of this has contributed towards the deterioration of Egypt’s ranking in the Global Index of Academic Freedom, issued by the International Institute for Policy in Berlin. In the 2019 classification, Egypt was among the 15 worst countries in academic freedom around the world.