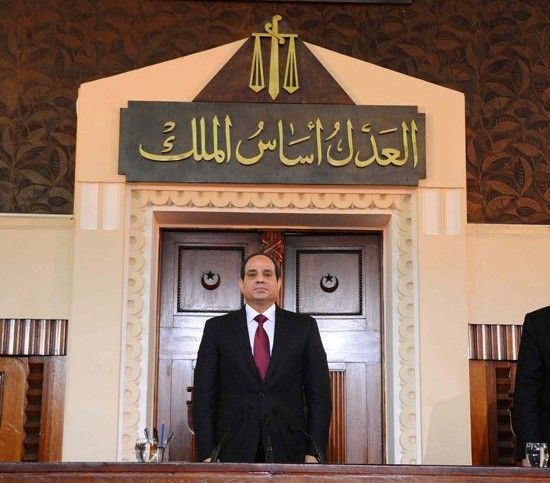 The new judicial appointments issued by the State Council included transferring counselor Samy Darwish from the Supreme Administrative Court to the commission of commissioners in the court. Darwish was a member of the tribunal that ruled that the Egyptian-Saudi Maritime Treaty, which provided concessions of Egyptian sovereignty over transferring the Tiran and Sanafir islands to Saudi Arabia, was void.

The decision came after the exclusion of Darwish’s son from appointment in the State Council although he got a degree in law with distinction and passed all exams and medical checks for the job. “If the real cause behind exclusion was revenging my father for judicial ruling he participated in issuing, so all jobs are easy unless my father is being pressured to [change] his work because of me,” said Omar Darwish in his appeal against the exclusion.

Darwish’s transfer violates the rulings in the Supreme Administrative Court, which provide that counselors cannot be transferred from their positions to other judicial apparatuses unless they apply for a superior position. In the same vein, the new appointments include holding the chair of the commission of commissioners for counselor Mohamed Mahmoud Othman and excluding counselor Fouaad Abdel Fattah, who enjoys seniority over Othman. In addition, Abdel Fattah Al-Sisi appointed 411 counselors in the State Council, involving 50 people who were appointed in the public prosecution last April. Sisi’s decision contradicts his previous statements that re-appointments in the judicial authorities have to be stopped to allow more opportunities for the fresh graduates.

Most appointments came in line with the tradition of appointing sons of counselors, with the current appointments involving the son of the Minister of Justice along with about 70 of the counselors’ sons. Against that, over 40 applicants, including sons of counselors and other officials, appealed to the head of the council against the appointments issued by Sisi, because they have graduate grades much better than those who were selected by Sisi. In response, the head of the council said that the exclusions were due to security instructions from the security bodies against the excluded.