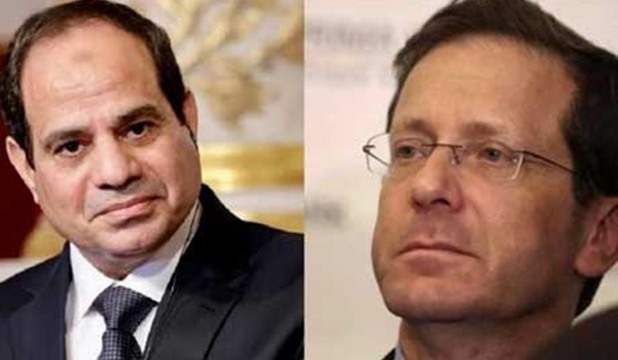 On Sunday the Egyptian president’s office declared that Abdel Fattah Al-Sisi made a phone call to his Israeli counterpart, Isaac Herzog, to congratulate him on his new post and the Hebrew New Year.

The statement said that Herzog expressed gratitude towards Sisi’s good wishes and Egypt’s vital role in achieving peace and stability in the region.

The statement added that the two presidents discussed issues of common interest and the dangers in the region, in addition to the bilateral relations between both countries and the efforts to revive the peace negotiations.

The call came before a meeting to be held between Abdel Fattah Al-Sisi and Israel’s PM, Neftali Bennett, in Sharm Al-Sheikh over the upcoming weeks after an invitation from Sisi, which was carried out by Egypt’s top spy Abbas Kamel, who met Bennett two weeks ago, according to Maariv daily.

KAN 11 TV added that it was agreed that the meeting would be held in public and predicted it would be soon. Maariv pointed out that Sisi’s invitation to Bennett came within Sisi’s desire to appease US President Joe Biden, which has previously criticised the Egyptian regime for its continuous human rights violations.