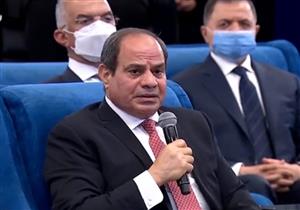 During a recent festival, Abdel Fattah Al-Sisi launched the so-called First National Strategy for Human Rights, which was said to be “the beginning of a new phase of the state’s dealing with civil, political, social, economic and cultural rights.”

The strategy inauguration came after a three-month delay, as it was supposed to be declared in June in a limited event in the Egyptian Foreign Ministry with ministers present, but the presidency decided to put it off to be inaugurated by Sisi himself just before the UN General Assembly on 21 September.

Three out of the four challenges are attributed to the culture not the institutional structures and frameworks, and even the fourth challenge is not related directly to the state’s practices. In fact, the challenges appeared as an attempt to acquit the state of any responsibility of the deteriorating human rights situation in Egypt. This may have been accepted in other situations, but not now, when the government is the main party which violates human rights in Egypt, including all basic freedoms and the right to life, with full employment of police state and authoritarian policies.

Regarding civil and political rights, the strategy focused on revising the most dangerous crimes, which are punished with capital punishment, according to the regional and international treaties signed by Egypt, along with the continuation of combating torture in all its forms including investigating complaints of torture, protecting victims’ rights, and limiting “the individual practices” that violate the sanctity of the body.

The strategy urged for limiting crimes tried in emergency courts, but not abolishing the emergency courts or improving standards of justice in such courts, along with preparing and issuing witness, reporter and victim protection law and a law to allow appeals over rulings issued by all types of courts. It was recommended also to automate litigation.

Regarding the detainees and prisoners, the strategy ignored calls for releasing political prisoners and the provision of real medical care for the prisoners, who suffer from medical negligence. Instead, it was recommended to develop and renew the prisons’ facilities and to construct new ones to reduce density. Regarding the right to peaceful demonstration, the strategy surprisingly attacked the people instead of the security bodies, which prevent demonstrations and assault protesters. The authors considered that the problem is the lack of peaceful gathering and knowledge of the lawful conditions.

Regarding economic and social rights, the National Strategy for Human Rights called for increasing the number of doctors and nurses in the governmental health system, the provision of health services for all regions of the country, combating the lack of medication, and establishing a digital platform for mental health services. It was recommended to combat illiteracy, limiting the dropout of education, establishing more schools in all educational phases, improving the quality of high schools and universities, and developing technical education and professional training.

The strategy recommended increasing job opportunities, integrating the informal economy in the national economy, promoting work standards, guaranteeing fair wages, rationing home care workers, and developing social security, insurance and pensions. Regarding the right to food, the strategy avoided addressing the reduction of food subsidies announced by Sisi a few weeks ago, while emphasising the need to improve the database and eligibility for subsidised food.

Finally, a recommendation with distributing cultural services all over the country, especially in the far and border areas, was added, along with developing cultural industries and traditional crafts.

Regarding women’s rights, the strategy recommended promoting women’s empowerment in society, women’s political participation, increasing the number of female employees in the state’s administrative apparatus and in decision making centres, increasing opportunities for women in the judiciary, the provision of women’s health care services, and protecting women from all forms of violence. Regarding children’s rights, the strategy recommended the protection of children from exploitation, negligence, and all forms of violence, and limiting the phenomenon of homeless children. The strategy also called for increasing oversight on social care institutions and the application of a foster family system.

In addition, the strategy called for preparing a united and updated database about disabled people and promoting their political participation along with allowing access to education, proper jobs, and social and health care. Regarding the youth, it was recommended that they should be allowed to assume leadership posts along with reduction of unemployment and supporting small and moderate projects. The strategy also called for increasing social protection programmes for the elderly and the allocations for social care institutions along with health care.

The final part of the strategy, which is related to education and capacity building, was presented without a real solution for violations recorded in Egypt. It focused on education and training programmes without giving guidance for victims.

An Egyptian delegation in Tripoli… Has Al-Sisi’s regime’s stance on the...

How is Egypt preparing to face coronavirus?