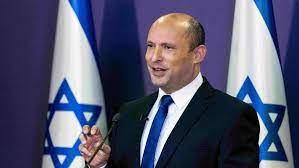 A friendly atmosphere prevailed over the visit, as pictures and videos show mutual compliments between the two men, while the Israeli flag was placed behind Bennett while he was sitting opposite Sisi to take pictures, and the flag appeared in full when it was displayed in Al-Ahram newspaper, the most famous government newspaper, which was not the case previously because of fear of popular criticism. This reflects the shift in Egyptian-Israeli relations during the Sisi era, when peace between the two countries became “warm,” after it was described in the pre-Sisi era as a “cold” peace.

What did they discuss?

Ambassador Bassam Rady, the official spokesman for the Egyptian presidency, seemed conservative in his talk about the visit, as he contented himself with an eclectic statement in which he said: “A session of bilateral talks was held during which the developments of bilateral relations in various fields were discussed, as well as the latest developments in the regional and international arenas, especially regarding the Palestinian issue.

Radi added: “The President affirmed Egypt’s support for all efforts to achieve comprehensive peace in the Middle East, based on the two-state solution and on the basis of international legitimacy resolutions, which contributes to enhancing security and prosperity for all the people of the region. He also pointed out the importance of the international community’s support for Egypt’s efforts for reconstruction in Palestine, in addition to the need to maintain the truce between the Palestinian and Israeli sides, especially with Egypt’s continuous moves to reduce tension between the two sides in the West Bank and the Gaza Strip.

As for the Israeli side, it was more eager to promote and market the visit as an important breakthrough, due to the considerations of internal political competition. The Israeli prime minister said in a statement: “The two leaders discussed a series of issues, including ways to deepen and enhance cooperation between the two countries, especially expanding the area of ​​mutual trade. A series of regional and international issues were also discussed.”

The statement added: “Prime Minister Bennett thanked President Sisi for the important Egyptian role in the region and said that more than four decades after its conclusion, the peace treaty between the two countries still constitutes a cornerstone in the security and stability of the Middle East. He stressed the tangible role that Egypt plays in preserving security stability in the Gaza Strip and finding a solution to the issue of prisoners and missing persons.

Bennett himself said in a video clip before his departure from Egypt: “The meeting was very important and very good. During the meeting, we built the infrastructure to establish a solid relationship, in preparation for continuing contacts between us. We discussed a series of political, security and economic issues and ways to deepen relations and enhance the interests of our two countries. Israel is opening up. Before the countries of the region and the basis for long-term recognition, this is peace between Israel and Egypt. So, on both sides, we must make efforts to strengthen these relations, and this is what we have done today.”

Israeli newspapers and channels spoke in more detail about what the two sides discussed, with the Times of Israel quoting an Israeli government official as saying that “the leaders discussed measures to prevent Hamas from rearming, including strengthening oversight at the Rafah border crossing. The Iranian nuclear programme and its support for armed groups was also among the main topics discussed.”

The Israeli official said that “other important regional challenges were discussed, including Turkey’s role in the Libyan civil war, Egyptian-Ethiopian tensions over the Grand Ethiopian Renaissance Dam project on the Nile, and the threat of jihadist terrorist groups. They talked about ways to significantly increase bilateral trade and tourism.”

Warm relationship and its goals

The last announced visit at the presidential level took place in January 2011, when former Israeli Prime Minister Benjamin Netanyahu met ousted President Mohamed Hosni Mubarak, about a month before he was overthrown by the January 25 revolution.

We say publicly, because many secret visits have taken place between Sisi and Netanyahu during the past 10 years. Netanyahu, who is currently the leader of the opposition in Israel, said, belittling the importance of Bennett’s visit: “I met Sisi publicly in 2017 at the United Nations, and since 2011 I have met him six times,” without clarifying the position of Sisi at the time, which raised many questions, as Sisi was head of Military Intelligence (2010-2012), then Minister of Defence (2012-2014) and then President of Egypt (since 2014).

Relations between the two countries witnessed unprecedented warmth through these secret visits, and there is a lot of evidence of this, for example, the security coordination between Egypt and Israel regarding the fight against terrorist groups in Sinai, which Sisi admitted publicly in 2019, when he said during an interview with the American “60 Minutes” programme, the Egyptian army is working in coordination with Israel against terrorists in the Sinai, in the northeast of the country, describing this cooperation as the “closest” ever between the two countries. On the level of economic relations between the two countries, in 2020, Egypt began importing natural gas, for the first time, from Israel, under a 15-year agreement worth $19.5 billion.

The issues that Sisi and Bennett discussed during their meeting are not evidence of the warmth of relations between the two countries. According to Israeli newspapers, the two sides discussed “Turkey’s role in the Libyan civil war, and Egyptian-Ethiopian tensions over the Grand Ethiopian Renaissance Dam project on the Nile,” which are purely Egyptian issues. Sisi did not want Bennett to leave his meeting without a strong gain, so he presented him with a valuable gift, which is that Egypt Air would operate four direct flights per week between Cairo and Tel Aviv, decades after Sinai Airlines operated those flights on unmarked airplanes. In return, Sisi expects that Israel will support his relationship with the United States of America, with whom he currently has frosty relations.

Has Egypt turned into a dumping ground for hazardous waste?