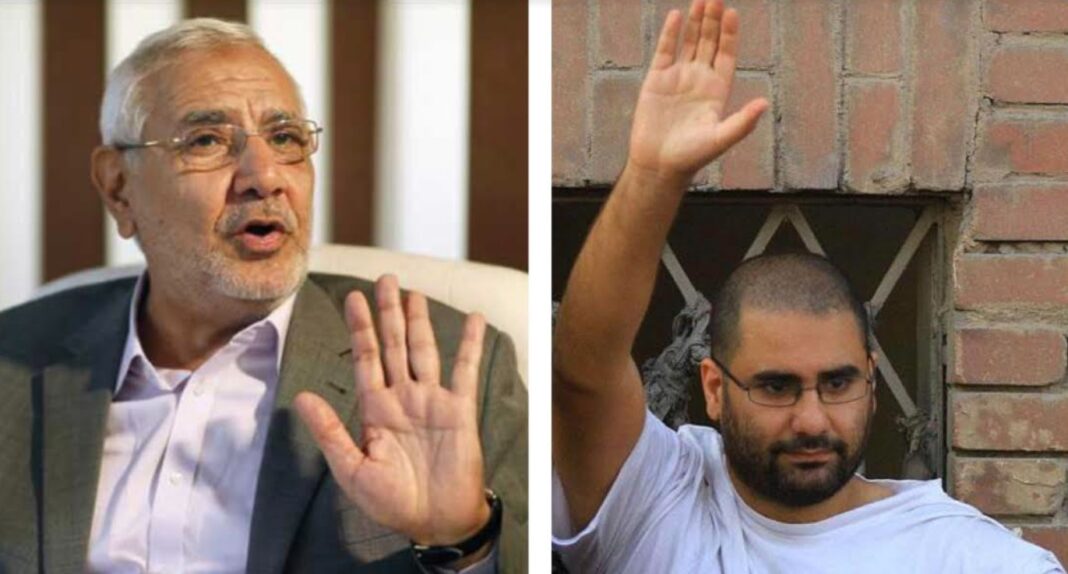 It is no secret that political detainees in Egyptian prisons suffer from various violations, including torture, ill-treatment, solitary confinement, and deprivation of the right to exercise, receive visitors and read books. The most recent of these means is the denial of receiving or sending letters to their relatives to reassure them about themselves.

The family of Dr. Abdel Moneim Aboul Fotouh, 70, the former presidential candidate and head of the Strong Egypt Party, complained that they were deprived of their right to receive messages from their father, who suffers a lot in prison, without considering his illness and age. Dr. Aboul Fotouh was arrested in February 2018, after he made televised statements criticising President Abdel Fattah Al-Sisi and calling for a boycott of the 2018 presidential elections due to the lack of competition. He has been detained since then until now without trial.

Huzaifah, his son, said in a Facebook post, “For the fifth time since August 23, and the second in a row, we are deprived of our right to receive a letter from our father without any reason.” Thus, the last answer the family received from the prison administration was on the 13th of last September. Huzaifah complained about his father status in prison, as he has been in solitary confinement for three years and eight months, without books, newspapers, magazines, or a radio. It has even reached the point that he is isolated in a separate ward and forbidden from human contact in any way, until the time of daily exercise, which is for only 90 minutes, in a limited indoor space. He is not allowed to pray in congregation, whether daily, Friday prayers, or even Eid prayers. Under this situation, only a monthly visit of 20 minutes is allowed, during which he sees one member of his family from behind a glass partition over the phone without any contact.

The letters that the family received from Aboul Fotouh were very important, as they eased this situation and reassured them of his health, but the prison authorities (or in a more correct sense, the regime of President Sisi) decided to deprive the family of this right, which doubled their fears about his health, as he previously suffered a heart attack in his cell and did not receive any medical care.

Letters have also been denied from the family of the detainee Alaa Abdel Fattah, one of the most famous Egyptian political activists. Since last September 14, the prison administration has stopped handing his family any letters from him despite the family’s concerns about his health after he complained about his deteriorating condition, mentally and physically, which recently led him to threaten to commit suicide. Abdel Fattah is being held in pretrial detention pending case 1356 of 2019. He was arrested by the Dokki Police Department on September 29, 2019, after completing the period of daily police surveillance, which he was serving as part of the precautionary measures, sentenced to five years, in addition to another five years. He spent it in prison in the case of the “Shura Council demonstration” in 2014.

Lawyer Khaled Ali revealed on September 13 that his client announced during a hearing to renew his detention that he was considering ending his life because of his desperation to improve the conditions of his solitary confinement in a high-security prison 2 in the Tora Prison complex, for two years, as well as the ill-treatment to which he is subjected in prison. Alaa told the judge: “I am in a horrible situation, and I will not be able to complete this process. I will commit suicide, and I asked Laila Soueif to receive my condolences.” After the session ended, he told his lawyer: “I know the new case will be referred to trial. I didn’t spend a whole year out of prison since 2011. If they want me to die, it will be suicide and salvation.”

A day later, on September 14, Abdel Fattah’s family received a letter from him promising them endurance and cohesion, but he did not hide the deterioration of his psychological condition and his feeling that he would spend the rest of his life in prison. Since then and until now, the prison authorities have refused to give Alaa’s family any letters from him, even though his mother goes to prison daily to deliver letters to him.

Under the auspices of National Security

The Law on the Organisation of Prisons and the Internal Regulations of Prisons stipulate the right of convicts to send two letters per month, and the prison director may authorise them to send more than two letters per month, and they also have the right to receive the letters that come to them. A convict sentenced to imprisonment by hard labour may send one letter per week. As for those held on remand, they have the right to write to their families and friends at any time. In all cases, the laws and regulations have given the prison director or the warden the right to see and resolve letters that are received or sent from prisoners and pretrial detainees, which constitutes an attack on the personal freedom of the prisoner by violating the sanctity of his private life.

Despite that, the prison administration does not implement these legal texts, and the refusal in normal cases comes from the National Security Officer (Political Security Agency) in the prison, who must pass all letters sent and received to prisoners, but in the case of well-known personalities, the refusal is usually by higher orders of one of the senior officials in the security services and the regime.