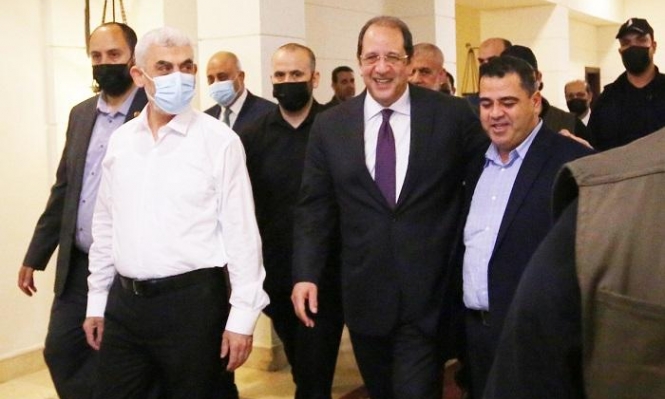 The Hamas leadership at home and abroad met in Cairo after an official invitation from Egypt, at the first meeting of its political office after the completion of the movement’s internal elections in early August, at a time when Egypt is trying to increase its visibility around the Palestinian issue to enhance its regional role.

The movement’s delegation, which arrived in Cairo a few days ago, included the head of its political bureau, Ismail Haniyeh, the movement’s head in Gaza, Yahya Al-Sinwar, its head in the West Bank, Saleh Al-Arouri, and Khaled Meshaal abroad, and members of the General Political Bureau. It is the first meeting in Cairo that has included all these diverse leaders for many years.

Hamas leaders discussed many of the movement’s internal problems, and how it will deal in the coming period with the issues at hand, including ending Palestinian division, establishing the truce with Israel in the Gaza Strip, and the prisoner exchange issue. Almost the same files were discussed by the movement’s leaders with officials in the Egyptian General Intelligence Service, headed by the head of the apparatus, Major General Abbas Kamel. According to a Hamas statement, the two sides discussed many issues at the level of political and field developments, bilateral relations, and ways to achieve the unity of the Palestinian people.

The movement’s leaders also discussed the developments of urgent issues, “especially the issue of Jerusalem in general, and Sheikh Jarrah (Jerusalem) and what is happening in Al-Aqsa Mosque and the practices and plans of the occupation and ways of curbing the behaviour of the occupation and its procedures in Jerusalem and Al-Aqsa.” The meeting dealt with the issue of the prisoner exchange with Israel, measures to ease the siege on Gaza and the reconstruction of what the occupation destroyed during its recent aggression on the Strip.

The visit of Hamas leaders to Cairo coincides with EgyptAir, the national airline, operating direct flights (four per week) to Israel for the first time in its history, a move that Tel Aviv has been demanding for decades. At the same time, a government delegation from the Palestinian Authority, headed by Issam Al-Daalis, head of government work, held meetings with Egyptian officials, which dealt with Gaza reconstruction, the Rafah Crossing, travel facilities for citizens and alleviating their suffering, in addition to trade exchange.

This week, a delegation of businessmen in Gaza held meetings with Egyptian officials on strengthening economic relations between Cairo and Gaza. The head of the Contractors Union in Gaza, Osama Kahil, said that the delegation went to a mission that was postponed for about two months for technical reasons, to discuss several issues related to import and export between Gaza and the Egyptian side. The delegation had several demands related to the increase and diversification of goods entering Gaza considering the occupation’s prevention of the entry of a number of goods, as well as the demand for facilitating land transport prices. The delegation also called for the export of products from Gaza to Egypt through the Rafah land crossing and from there to Egyptian ports to be exported to European markets, instead of exporting them through the Israeli Kerem Shalom crossing.

All these various activities confirm that Egypt presents itself as an indispensable mediator in the Palestinian issue, as it has strengthened its relations with all parties, whether in Israel, Hamas, the Palestinian Authority, or even Palestinian businessmen. Egypt aims behind this to restore its role in the Palestinian cause, and its role in the Middle East region, after it found that the rug was being pulled from under its feet following the recent wave of normalisation led by the United Arab Emirates, which is trying to impose itself as a mediator in Palestine as an alternative to Egypt.

Egypt also sees that activating its role in the Palestinian issue enhances its relations with the United States and forces the administration of President Biden, which takes an unfriendly position on the regime of President Sisi, to respect and appreciate Cairo, which is what happened after the Egyptian success in the ceasefire between Israel and the resistance factions in the Gaza Strip which resulted in Sisi and Biden making their first phone call since the latter took office in January 2021.

4 years in prison for researcher Ahmed Samir: The Egyptian regime...