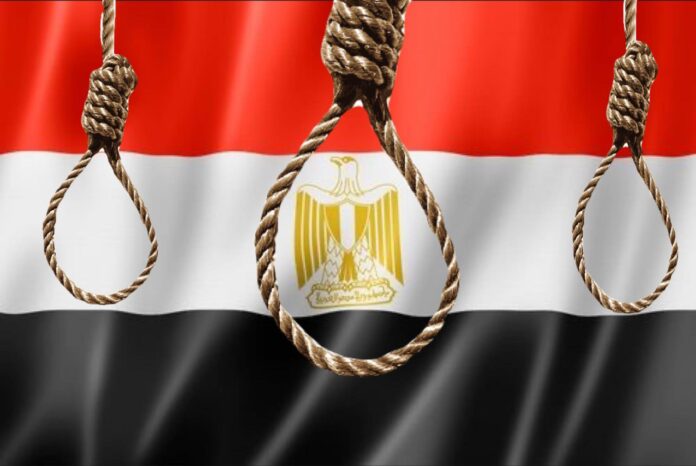 On the 19th anniversary of World Day against the Death Penalty, the Egyptian Network for Human Rights issued a statement to say that whilst most countries across the world have abolished or frozen the death penalty, Egypt has gone the opposite way.

Egypt comes first on the list of Africa and the second among the Middle East countries after Saudi Arabia and the fifth globally of applying the death penalty from 66 countries, while 106 countries have abolished this penalty forever.

The statement emphasised that over the last few years the Egyptian authorities have expanded the use of political death penalties using lies, distortion of facts, and by taking measures that violate the constitution and law and have used terror, military, and National Security courts. All of these are emergency trials that have a political vengeance nature. Such practices have ranked Egypt fifth on the global list of the execution of the death penalty.

The Egyptian Network for Human Rights explained that this is due to the judgments issued from emergency trials that violated the minimum level of fair trial ethics, investigations in the absence of a lawyer, abusive treatment, extracting confessions under torture and many other violations. Ninety-three Egyptian citizens have been executed in political cases since 2014, besides 77 other citizens waiting to be executed at any moment after all litigation procedures have been exhausted. The ENHR demanded all active execution sentences be frozen because of the lack of confidence of the judicial system in Egypt, in addition to stopping the work of emergency, retaliatory, and unconstitutional courts. Also, to stop the issuance of new death sentences.

The Committee for Justice revealed that the Egyptian courts continue to issue collective judgments despite global fair trial principles. The Criminal Court of El-Minya governorate has issued four death penalties against Mohamed Abdelhamid Mohamed Ali, Khaled Mohamed Abdelraziq Ahmed, Ashour Khalil Amin Khalil, and Ebrahim Werdany Mahmoud Ahmed. The four sentenced are among 74 accused who have been tried in case no. 9310 of the criminal circuit of Samalut district, registered no. 868/2014 in northern Minya.