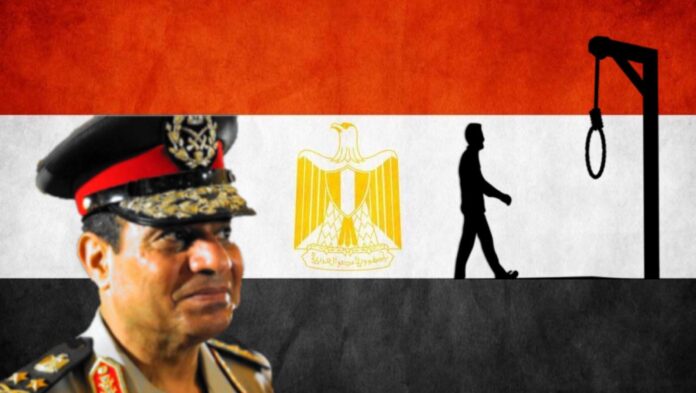 The year 2020 saw 314 people being sentenced to death, and the hanging of 136 of the convicts, which is a new precedent in the history of Egyptian criminal justice institutions, which reflects the continuation of the expansion without account or ceiling in the imposition of the harshest and most severe punishment in Egyptian law as well as in its implementation.

Recent research issued by the Egyptian Initiative for Personal Rights, an independent human rights organisation operating from inside Egypt, titled “In the name of the people.. the 2020 annual report on the death penalty in Egypt,” revealed an increase in the frequency of signing and implementing the death penalty during the past five years, without adherence to the legal guarantees required for the imposition of the penalty or assessing the feasibility of imposing it even on society and the rate of committing crimes. This expansion in application was accompanied by another expansion in naming new crimes punishable by death within a criminal justice system that is supposed to strike a balance between deterrence and rehabilitation of the accused.

As for the execution of the sentence, in 2020, the Prison Service executed at least 136 people in 27 cases, including 10 defendants in three military cases and 15 others in three cases of a political nature, and thus the year 2020 witnessed the largest number of executions that were carried out in one year. This shows the extent of the brutality suffered by the regime of President Abdel Fattah Sisi. Before 2011, the state was slow in implementing the punishment of convicts in final sentences, to the extent that some analysts described this previously as a “practical suspension” of the use of punishment.

But by the end of October 2020, the justice system in Egypt had carried out the largest number of executions in various cases since it began to expand the use of punishment in the last five years; 53 people were executed in different cases in a period of no more than a month. Since then, the rapid increase in executions has not declined, and in November we also witnessed the execution of at least 32 people. Thus, the total of the two months is 85 people who were executed, which is the largest number in a short period of time and exceeds the total number of executions in the years 2018 and 2019, when 78 people were executed during the two years combined.

Research by the Egyptian Initiative for Personal Rights reviewed examples of cases in which death sentences were carried out, which showed the horrific scale of violations that were underestimated, and the failure to adhere to the legal guarantees required for the imposition of the punishment. For example, in July 2020, the Prisons Authority executed seven people in Case No. 6771 of 2013 Ismailia Felonies, which date back to 2013 in Ismailia Governorate, where a police captain was killed by several people during a quarrel.

According to the forensic report, defendants in the case were subjected to “electrical torture, beatings with a stick and extinguishing cigarettes on their bodies.” They were also threatened with assaulting their mothers and sisters to force them to confess to committing the crime, but the court did not take into account the report or the defendants’ testimonies before it and was satisfied with the investigations of the prosecution and the policemen.

The court sentenced the seven defendants to death, despite the great discrepancy between their various crimes described in the investigation papers, violating one of the most important principles of the law, which is individual criminal responsibility, and the necessity of observing the proportionality between the size and nature of the offence committed and the punishment. Only two of the officers actually killed the officer, while the role of one of the accused was limited to driving a car and firing shots into the air. Despite that, he was equated with the rest of the accused and was sentenced to death and the sentence was carried out.

According to the defence lawyers, the court violated their right to interrogate witnesses, as their request to question the prosecution and denial witnesses was rejected, which is in violation of the Code of Criminal Procedure, especially since five of the nine prosecution witnesses were based on what they heard alone. Added to all this is the procrastination and the court’s ignoring of the request for the presence of the defence witnesses.

Third highest number of executions in the world

However, the facts before us indicate that Egypt is not implementing its international obligations, considering the brutality of the regime of President Abdel Fattah Al-Sisi and his desire to terrorise society and impose an iron grip on it.