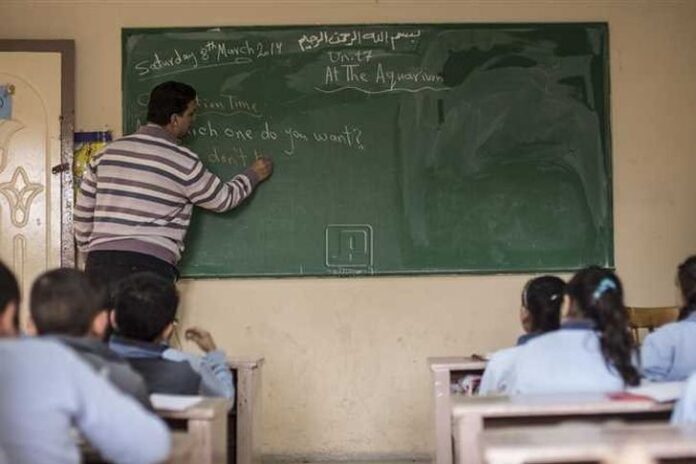 It took the government seven years to be convinced that there is a severe shortage of teachers in public schools – amounting to 300,000 teachers – and that this shortage must be filled as soon as possible so that the crisis does not worsen further. Seven years in which students and their families have complained about the shortage of teachers, and the inability of the existing teachers to fill the deficit. Seven years, during which the number of students increased by 3.266 million, while the number of teachers decreased by 21,000, due to the retirement of the pension, and the government’s refusal to appoint new teachers, claiming that there was no budget. Then, thankfully, the government was convinced that the crisis would not solve itself by itself and that new teachers must be hired.

A disaster in public schools

For decades, government schools have been suffering from a shortage of teachers, but the government has appointed a new number of teachers every year, even if through temporary contracts, to reduce this deficit. But since 2014, that is, after President Abdel Fattah Al-Sisi ascended to power, the government stopped appointing new teachers, claiming that there are no financial allocations. Over the years, the deficit worsened until it reached, according to the Minister of Education, 300,000 teachers. The government tried to deal with the crisis by opening the door for volunteers to work in schools, but this ploy did not bear fruit, as no one was willing to work for free or for a low wage that did not meet his basic needs.

To give an overview of the scale of the disaster in public schools, it is sufficient to mention the numbers contained in the statistical yearbook for the academic year 2020/2021, issued by the Department of Systems and Information of the Ministry of Education. The number of public school classrooms in the academic year 2020/2021 reached about 442,000, an increase of 22,000 from the situation four years ago (the 2016/2017 academic year). The number of students reached about 3,266,000 during these four years, with an average annual increase of 816,000 students. Of course, this situation resulted in an increase in the density of students in classrooms, after the average density in 2016/2017 was about 44.3 students. In 2020/2021 it exceeded 49.5 students, which means that the problem is worsening, and it does not seem that it is on the way to a solution despite promises made by the government.

Theoretically, it is assumed that the number of teachers, principals, and employees will increase to meet all these numbers, but in practice, the numbers are exactly the opposite, as the number of teachers decreased between 2016/2017 and 2020/2021 from 918,000 to 897, a decrease of 21,000 teachers, while the ministry says that the shortage of teachers is 300,000. The number of school principals decreased during this period from 38,906 to 30703, by 8,200, while the number of employees decreased from 229,000 to 210,000 a decrease of 19,000 employees. Only President Sisi is responsible for exacerbating the public education crisis. Since he took office, the appointments of teachers have stopped, and instead of the president paying attention to building schools and classrooms, he preferred to spend hundreds of billions to build a new capital with skyscrapers and yet his government claims there is no money to solve the education crisis.

The government is starting to realise that there is a crisis

The independent Al-Manassa website quoted an official source in the Ministry of Education that the ministry had reached an agreement with the Central Agency for Organisation and Administration to include the teachers’ deficit on the cabinet’s agenda, in preparation for placing the issue among the priorities required to allocate urgent financial resources to it in the state’s general budget, explaining that the cabinet was finally convinced of the need to appoint new teachers.

The source added that the consultations with the Central Agency for Organisation and Administration resulted in the inevitable appointment of new teachers, in light of the blatant deficit suffered by schools, which amounted to nearly 320,000 teachers at the beginning of the current academic year. The source pointed out that the Council of Ministers, over the past years, did not include the teachers’ deficit in the budget, claiming that the Ministry of Education was referring the matter to the government directly, without following the normal path, by agreeing with the Central Agency for Organisation and Administration and informing it of its needs accurately, according to detailed data. As if these formalities and bureaucracy are the crisis, and the government is blind to reality.

The source ruled out that the government would agree to appoint 320,000 teachers at once because that would require huge sums of money, but this number would be scheduled so that every year there would be new teachers. Therefore, the crisis will continue for years to come, until the government completes filling the current deficit.