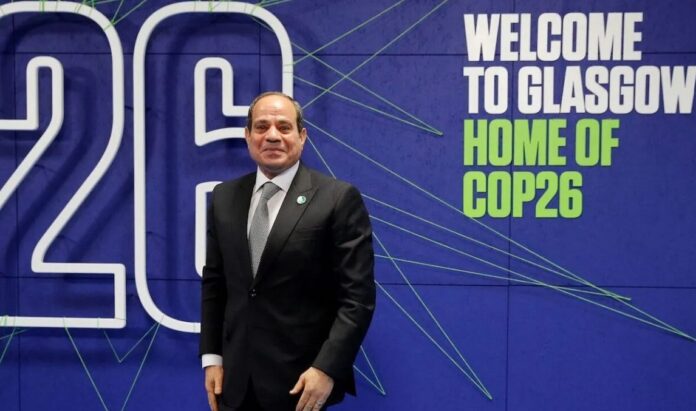 President Abdel Fattah Al-Sisi’s speech at the United Nations Climate Change Summit (COP26) aroused much praise, especially from his media outlets, as it carried many good pledges, including increasing the contribution of renewable energy sources in Egypt’s energy mix to 42 per cent by 2035 and the shift to clean transportation through the expansion of metro networks, trains and electric cars.

On the ground, however, the Egyptian regime’s actions are criticised as it refused to sign the pledges to reduce methane and protect forests, which were signed by more than 100 countries, while its policy of uprooting trees and gardens to build roads, bridges and investment projects continues.

Egypt has not signed pledges to reduce methane and protect forests

The most prominent pledge made by world leaders during the United Nations Climate Change Summit (COP26) was the “commitment to act collectively to halt and change the trend of deforestation and land degradation by 2030,” signed by 133 countries, not including Egypt, which provided no justification for this refusal. The pledge aims to conserve and accelerate the restoration of forests and other terrestrial ecosystems, facilitate trade and development policies that are mutually beneficial to countries and do not lead to deforestation and land degradation, enhance rural livelihoods, develop profitable and sustainable agriculture, and recognise the multiple values ​​and rights of indigenous peoples in forests. Another important pledge was the initiative of the United States and the European Union to reduce emissions of methane, one of the most dangerous emissions on the planet, and 103 countries participated in this pledge, not including Egypt.

The Global Methane Pledge aims to rapidly reduce methane emissions, with countries that join it committing to a collective goal of reducing global methane emissions by at least 30 per cent from 2020 levels by 2030, and moving toward using the best inventory methodologies available to quantify methane emissions. Did Egypt refuse to give any pledges then? The answer is no. Egypt, among 23 countries, has pledged to stop using coal in the electricity production sector. But the irony is that Egypt does not produce electricity from coal at all, because it has other sources of energy such as natural gas that depends on it, and therefore this undertaking is considered useless.

The field in which Egypt uses coal is the cement industry, and in this field, Egypt has not made any commitment. In 2014, the government allowed cement companies to use coal, due to the scarcity of natural gas at the time, which was provided as a priority for electricity generation. The government took this decision despite the great popular opposition to coal because of its significant effects on the environment and the health of citizens. Currently, the government refuses to take a decision to ban the use of coal in the field of cement despite the availability of other cleaner energy sources.

Cutting down trees and removing green spaces within cities is an old practice in Egypt, but it has been unprecedentedly brutal over the past few years. For example, the government removed about 96 acres of green space in the ancient Heliopolis neighbourhood, claiming it was to “develop” the neighbourhood and eliminate traffic congestion. Development expanded to other governorates such as Alexandria, where dozens of trees were razed and cut down from the Montazah Royal Gardens, and Ismailia, where 200-year-old trees were cut down to build bridges.

The government has also removed tens of thousands of trees surrounding canals and drains throughout Egypt, claiming that they impede the process of lining these canals and drains, as part of the state’s plan to reduce water wastage. Even after the lining of the canals was finished, the state did not plant these trees anymore, and even built concrete walls around the canals to prevent new ones being planted.

The Egyptian citizen’s share of green spaces is 1.2 square metres, while the global average is 15 square metres per person. To realise the size of the chasm we fall into, per capita green space in England is 24 metres, in Russia 20 metres, and in the United States it is 18 metres.

Green spaces are not a luxury, but an urgent necessity for healthy living, as trees and plants contribute to reducing air pollution, which annually kills seven million people around the world and causes strokes, heart disease, lung cancer, chronic obstructive pulmonary disease and respiratory infections. Polluted air is one of the reasons for the high rates of premature death, as it shortens the lives of Egyptians by about 1.85 years, and costs the Egyptian economy huge losses, according to the World Bank. The cost of air pollution in Greater Cairo alone, in 2016/2017, amounted to 1.35 per cent of GDP, equivalent to 47 billion Egyptian pounds at that time. Despite this, the government continues to relentlessly eliminate green spaces, which are scarce in the first place, especially in Cairo, which is the most polluted city in the world, ignoring the citizens’ objections and the increasing health risks.

After all, President Sisi comes to claim that he participates in preserving the planet from climate changes, while the pledges he made regarding the expansion of the use of mass transportation and electric cars and increasing the proportion of renewable energy from the energy mix are all pragmatic goals in favour of his plans and not for the environment. Renewable energy is abundant in Egypt through the sun and the desert, and is much cheaper than its non-renewable counterpart, so it is only natural that the country’s dependence on it will increase. The establishment of public transportation networks is primarily aimed at serving the new capitals of government, whether in the new administrative capital or the city of El Alamein (the summer seat of the government) and other cities, not for the sake of the planet.