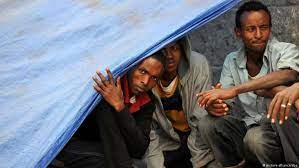 Ten Eritrean asylum seekers being detained in Al-Kasir Police Station on the Red Sea are on hunger strike, protesting the Egyptian authorities’ refusal to register their asylum applications in the UN Refugee Agency. The refusal raised the refugees’ concern after the Egyptian authorities forcibly deported eight other Eritreans back to Asmara in October.

The eight Eritrean asylum seekers are relatives and were arrested in October 2019 after they arrived in Egypt.

The Refugees’ Platform in Egypt issued a statement attacking the Egyptian authorities for deporting the Eritrean refugees and preventing them from their right to hire a lawyer and to register with the UNHCR. The platform said that the deportation is a violation of the constitution and the international principal that bans the forced deportation of refugees and asylum seekers to countries where their life or freedom could be threatened.

The deported Eritreans face harsh penalties in their country, where illegal departure from the country is punished by death or life imprisonment along with the forced conscription of both males and females above 15 years, which Amnesty International described as corvee. The platform called upon the UNHCR to intervene and support the detained refugees and their relatives and urged the Egyptian parliament to issue a refugee protection law.

According to international law, the 139 countries that signed the 1951 Refugee Convention are obliged to implement its provisions. The UNHCR retains the right to oversee the implementation of this process and to intervene in order to protect real refugees and give them asylum.

Egypt official: The real COVID-19 figures in the country are 10...

Over 15 Egyptians attempting to reach Italy drown off Libyan coast