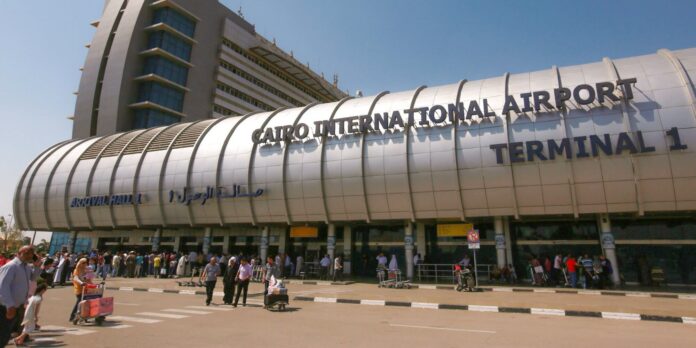 Over the past few years, the phenomenon of security authorities stopping people at Egypt’s airports, especially Cairo International Airport, has grown in popularity. Some are Egyptians travelling abroad or returning, especially those affiliated with the opposition or human rights defenders, researchers and journalists. It is often without cause or for some arbitrary legal reason.

In this case, the detainee falls into the hands of the National Security officers (the political security apparatus of the regime of President Sisi), to “preserve the national security of the country.” They may order his detention for a few hours or days and then release him, make him forcibly disappear, or bring him to trial in one of their trumped-up cases.

The Arab Network for Human Rights, one of the leading human rights organisations working in the defence of freedom of expression in Egypt and the Arab world, monitored in a research paper it issued a few days ago, how Egyptian airports have turned into “traps” to hunt opponents or critics of President Sisi’s regime, in violation of the Egyptian constitution and international conventions.

There are many lists in airports which the traveller or returnee can find his name on, which may turn his life into hell, the most important of which are: Travel ban lists: A list sent to airport authorities without specifying the reason, and accordingly the citizen is prevented from travelling without being arrested and without being notified of reasons that the airport security men themselves may not know.

Among the names on this list is researcher and academic Walid Salem, who was prevented from travelling for the first time on May 8, 2020, by the security authorities at Cairo Airport, while trying to travel to the United States of America, where his passport was confiscated without giving any legal reason as to why. Salem was previously arrested in May 2018 because of his PhD thesis dealing with the history of the Egyptian judiciary. He was investigated in connection with Case 441 of 2018, limiting the security of a supreme state to accusations of joining a terrorist group and spreading false news.

He was imprisoned for seven months and then released under precautionary measures, and he remained committed to attending the precautionary measures and their renewal sessions until they were lifted in February 2020, even though Salem was prevented from travelling despite the absence of any legal justification to prevent him. On May 24, 2021, he tried again to travel to France after he confirmed through his lawyer that his name was not on the travel ban lists, but the Cairo airport authorities stopped him again and informed him that his name was on the banned lists on the previous day, May 23, 2021, without also giving a reason.

Travel monitoring lists: a list that means the arrest of the citizen during the completion of his travel procedures, and the decision to travel, prevent him, arrest him, or release him depends on the official or the party that requested to be notified of the citizen’s travel.

One of the most prominent examples of this is human rights lawyer Ibrahim Metwally, who was arrested in September 2017, during an attempt to travel through Cairo airport to Geneva to participate in the 113th session of the United Nations Working Group on Enforced Disappearances, as he was a coordinator of the Association of Families of the Enforced Disappeared. Metwally was brought before the Supreme State Security Prosecution in connection with Case No. 900 of 2017 on charges of assuming the leadership of a group founded in violation of the constitution and the law, spreading false news, and communicating with foreign parties. Metwally remained in pretrial detention in Al-Aqrab high-security prison in a solitary cell, in very bad conditions. He is still in pretrial detention after spending four years in a solitary cell in a high-security prison.

The prominent novelist Alaa Al-Aswany is among the two topics on this type of list, as he was previously arrested while travelling through Cairo Airport, and was held for about two hours, until an order was issued by the National Security Agency to allow him to travel.

Access control lists: A list that means the arrest of a citizen returning from abroad, pending a decision on him, often after a phone call to a party or person, whether he is arrested or is he allowed to enter the country without being arrested. Among the subjects on this list is researcher Patrick George, a master’s student at the University of Bologna and a researcher at the Egyptian Initiative for Personal Rights, who was arrested by Cairo airport security forces on his return from Italy, where he is studying, in February 2020, and was investigated in connection with Case 7245 for the year 2020.

About a month later, Patrick was investigated again in connection with a new case, No. 1766 of 2020, on several charges, most notably spreading false news and statements, promoting the use of violence, and committing terrorist crimes, inciting to overthrow the regime, and inciting demonstrations. Patrick is still in jail. No-entry lists: These are lists that often include non-Egyptians, who are stopped at the airport and denied entry, such as international journalists and human rights defenders.

Among the most prominent of those prevented from entering Egypt is the New York Times correspondent, David Kirkpatrick, who was arrested and detained for hours at Cairo Airport in February 2019, before the authorities prevented him from entering the country and forced him to travel to London. Kirkpatrick served as the New York Times bureau chief in Cairo from 2011 to 2015. Customs notification lists: This list means the traveller is transferred to the customs officer to search his papers, books, phone and laptop for possessing written materials that the authorities are not satisfied with.

Violation of the constitution and international conventions

Article 62 of the Egyptian Constitution states that “Freedom of movement, residence and emigration are guaranteed. No citizen may be deported from the territory of the State, nor prevented from returning to it. No citizen may be prevented from leaving the territory of the State, or imposing house arrest on him, or prohibiting residency in a specific place upon him, except by a reasoned judicial order for a specified period, and in the cases specified by law.”

The International Covenant on Civil and Political Rights, to which Egypt is a signatory, states:

The Egyptian authorities disregard these constitutional texts and international covenants to protect the regime and terrorise its opponents, so that Egypt becomes a state of one voice without opposition or critics, where everyone submits to the will of the redeemed leader, whose newspapers praise him and his achievements day and night.