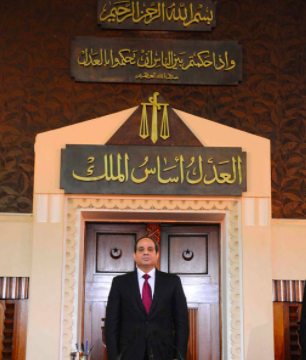 Today’s verdict represented a great shock to the families of the accused, as well as to those interested in human rights and public affairs, as many had hoped that the state’s claims of a breakthrough in the political situation, rights and freedoms would be realised. Promises of improving human rights are just cosmetic changes that the regime adorns to impress Western countries and mitigate their criticism of it.

A blatant example of the violation of all rights

In June 2019, the security services arrested Ziad El-Alimi, Hisham Fouad and Hussam Moanis, well-known activists of the January 25 2011 revolution, on the grounds of coordinating the preparation of an electoral list in order to run in the 2020 parliamentary elections, and to compete with the regime’s list. The Supreme State Security Prosecution charged all three, along with others, with “financial cooperation with the Muslim Brotherhood, with the aim of financing its movements to target and overthrow the state in conjunction with the June 30 anniversary,” under the name the alliance of hope.

After more than two years in pretrial detention in connection with this case, everyone was surprised that the security services fabricated a new case, No. 957 of 2021, and charged the three detainees and others with spreading rumours, statements and false news about the internal situation in the country, which would weaken the state and harm the country’s national interests, affecting its economic status, disturbing public peace, spreading terror among the people, and harming the public interest, as well as suggesting to world public opinion that the state violates the rights of its people and commits crimes against its citizens in violation of the constitution and laws.

The Emergency Supreme State Security Prosecution considered that these fabricated charges deserve to be heard in a trial, and quickly referred the case to the Supreme State Security Misdemeanor Court, which also committed many violations against the defendants and their defence team. Among these violations, lawyer Khaled Ali, a member of the defence team, revealed that the court refused to allow the defence team to make a copy of the case’s papers, which amounted to about 1,000 pages. The latest legal violations in this case were the failure to issue the verdict in public, as stipulated by the law. Thus, verdicts were passed against El-Alimi, Fouad and Moanis in the new case, while the original first case is still pending and has not yet been referred to trial, despite the passage of two and a half years.

Final rulings that cannot be appealed

The judgements made by judges of the Supreme State Security Courts are final and may not be challenged by appeal or cassation. The defendants and their defence can only submit a grievance or petition to the military governor, who is President Sisi or his representative. A petition or a grievance is not on the same level as an appeal or an appeal in cassation. An appeal to an appeal or a cassation means an appeal against this ruling due to the similar legal defects before a judicial authority, and then the law allows you to have a higher judicial circuit of appeal or cassation to consider the case.

Again, new notes and documents are presented, and new pleadings are heard. As for the petition, it is just a request submitted to the office of the military governor or his deputy (the president or the prime minister), and therefore it is not submitted to a judicial authority but to an administrative body, and therefore no sessions are held to consider the complaint or investigate it, and no pleadings are heard from the accused, his defence, or from the prosecution.

The law grants broad powers to the president in this regard, as it allows him when presenting a sentence to reduce the sentence imposed, or to substitute a lesser sentence, or to cancel all or some of the penalties, or to suspend the implementation of all or some of the penalties, and he may also cancel the ruling with the case filed or with the order to re-trial before another circuit. The president may, after ratifying the guilty verdict, rescind the verdict while keeping the case, reduce the penalty or suspend its execution, all of this unless the crime for which the judgment was issued was a felony of premeditated murder or participation in it. Thus, the whole matter is in the hands of Sisi personally. If he wishes, he can ratify the verdict and put the accused off another year of imprisonment, and if he wishes, he pardons and releases them.

And the cloak fell off

Little by little, the mantle of human rights that the regime is trying to wear is falling, as barely two months have passed since the launch of the Human Rights Strategy, which promises a different country with real rights and freedoms, until we found these allegations falling under the impact of the exceptional and unjust provisions. This is a message to everyone that the Sisi regime is steadfast and does not change and does not give up its extremist positions towards the opposition, especially the peaceful ones that can find a foothold in society, and that all human rights rhetoric is nothing but cosmetics.

Egyptian airports have become a trap for critics and opponents

Violence mounts in Cairo: A gun battle in the Egyptian capital...