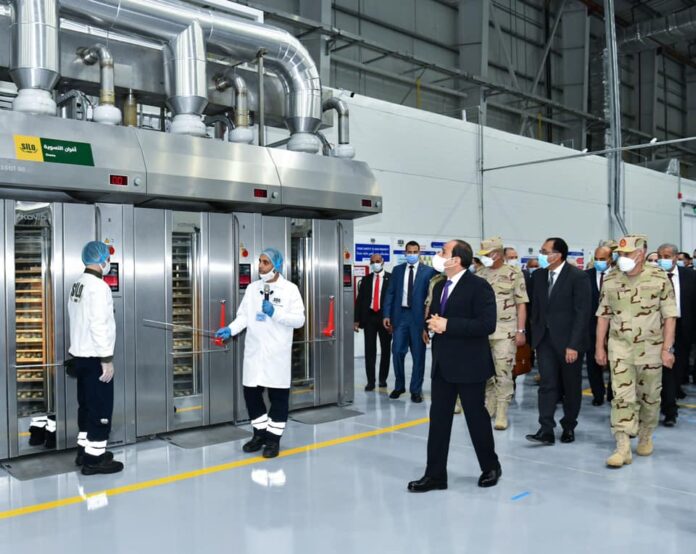 On 3 August, President Abdel Fattah Al-Sisi inaugurated the Silo Foods city for food industries, which was established by the National Service Authority of the Armed Forces.

Many Egyptians remember that day well, when the president sat among his entourage and other senior state leaders, declaring the need to increase the price of subsidised bread, on which millions of Egyptians live, especially the poor, to save 8 billion pounds which would be allocated to supplying meals to pupils, provided that Silo Foods take this job.

Sisi’s statements angered many Egyptians, as subsidised bread is the mainstay of meals for 30 million Egyptians living below the poverty line, while the regime’s mouthpieces were raised to defend Sisi’s decision, stressing that this decision is in the public interest because the money that will be saved will be directed to our children, school students, who will receive high-quality meals produced by the Egyptian army.

The school year started in October, and school students began to get Silo Foods amid cheers, magnification, and praise from the regime’s media. But barely two months passed before the Egyptians woke up to news that dozens of students had symptoms of food poisoning after eating the meals. Complaints about the school meals began in early November, when the Al-Azhar institute took a decision that confirmed suspicions about the poor quality of this food.

On 2 November, the Al-Azhar institutes sector issued a decision to permanently stop receiving halawa and juice and then all meals provided and supplied to the Al-Azhar regions, due to the suspension of these products by the National Food Safety Authority. Although halawa and juice are not produced by army factories, Silo Foods is the contracting party to supply student food to Al-Azhar institutes, as an official document explains, and therefore it bears full responsibility for the quality of this food.

Days passed and fears of the poor quality of school food persisted, until the ban occurred, and dozens of students in the governorates of Qena, Assiut and Kafr El-Sheikh suffered from fatigue, including abdominal pain, vomiting and diarrhea. The governors of Qena and Assiut took a decision to stop dispensing school meals pending an investigation.

The head of the National Food Safety Authority, Hussein Mansour, announced an investigation into the incidents of suspected poisoning to ensure that all factories that supply ingredients for school meals follow the rules and requirements of food safety, and that they are included in the authority’s whitelist, noting that the authority, along with the rest of the relevant state agencies, is investigating the matter currently, to determine which product is to blame.

The governorates of Qena and Assiut began receiving school meals from the army’s Silo Foods company on 15 November, according to the schedule announced by the Ministry of Education for the supply of school meals. The paradox in this situation is the reaction of the Minister of Education, Dr. Tariq Shawky, who refused to admit that there was a problem with school meals and said that all complaints were baseless. To make matters worse, Shawky said that the Brotherhood promoted a “rumour” of student poisoning, and that some parents were promised EGP 500 pounds if they claimed the poisoning took place in Assiut.

Thus the minister, who has worked in many prestigious international institutions such as UNESCO, follows the same approach as the dictatorial regime for which he has been minister for nearly five years, in denying facts and refusing to acknowledge crises and problems, and hanging matters on the “terrorist Brotherhood.” The minister, and behind him the regime of President Sisi, does not want to admit the poor quality of school food, because this means that those responsible for processing or supplying it, which in this case are the army companies, are neglectful, which is something that the regime cannot admit.

The new Levant: A US-sponsored alliance to corral Iran