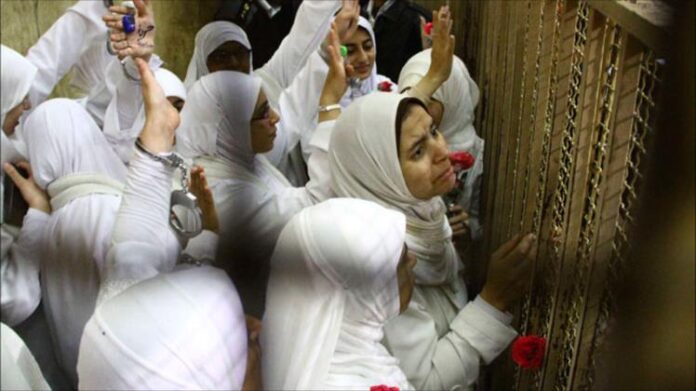 On International Women’s Day, the We Record platform for human rights published a statement documenting that during their arrest and forced disappearance at least 58 Egyptian women and girls were subjected to violence and abuse by the Ministry of Interior and the National Security Agency’s officers between January and November 2021.

We Record also reported that 203 women and girls, detained in connection to political cases, have been subjected to violence and physical and psychological abuse. The women were subjected to sexual harassment during the interrogation in the premises of the National Security Agency in Nasr City and the El-Abaseya regions in Cairo. The statement mentioned that the Egyptian authorities cannot deny the kidnappings and interrogations conducted outside the law, especially since some of such incidents were mentioned by people who are close to the Egyptian authorities.

As the former parliament member and the president of Reform and Development, Mohamed Esmat El-Sadat is the head of the International Dialogue Group and has been assigned to improve the Egyptian authorities’ image in the face of human rights concerns.  Previously, El-Sadat mentioned in an interview with Mada Masr that during his visit to one of the National Security premises in Cairo, he saw a blindfolded girl who thought she was in Alexandria, which was a “painful” incident in his words. It should be mentioned that this interview was removed responding to El-Sadat’s request.

We Record has invited all activists to provide help in revealing such incidents committed against women in Egypt. The Declaration on the Elimination of Violence against Women, proclaimed by the General Assembly resolution of the United Nations of December 1993, defines violence against women as: “Any act of gender-based violence that results in, or is likely to result in, physical, sexual or psychological harm or suffering to women, including threats of such acts, coercion or arbitrary deprivation of liberty, whether occurring in public or in private life.” This applies to the practices of the Egyptian authorities committed against Egyptian women and girls, according to the statement.

We Record, the organisation concerned with human rights, called on rights advocates to raise their voices to reveal the violations committed against women by the regime of the Egyptian president Abdel Fattah Al-Sisi.

The Egyptian Minister of Health: A slight but continuous rise in...