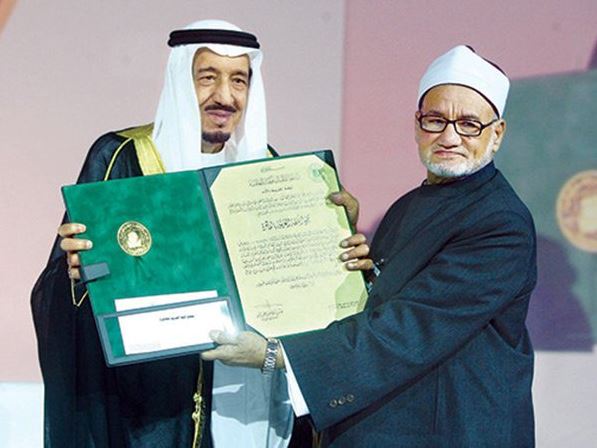 King Faisal International Prize for services to Islam was awarded this year to the Egyptian Professor of Theology, Hassan Al-Shafi’i, jointly with the former President of Tanzania, Ali Hassan Mwinyi. Al-Shafi’i’s name has repeatedly circulated Egypt’s media over the past years due to the repetitive injustice he has experienced due to his opposition to the Rabaa massacre.

Al-Shafi’i was known for his patriotic struggle since he was a student. He participated in the popular resistance against the British occupation of the Suez Canal after the abolition of the 1936 treaty in 1951. He was also arrested twice during the mandate of late President Gamal Abdel Nasser, due to his opposition to Nasser’s dictatorship. Hence, al-Shafi’i remained away from the limelight until the 25th of January Revolution in 2011.

After the revolution, Al-Shafi’i was selected as an Al-Azhar’s Senior Scholars Authority member. Furthermore, the Sheikh of Al-Azhar, Professor Ahmed el-Tayeb, appointed him as his advisor and the head of the professional office in the presidency of Al-Azhar. Along with his new posts, he was elected as the head of the Arabic Language Complex, a respectful research independent institute affiliated to the Minister of High Education, in February 2012. He was also nominated by el-Tayeb to represent Al-Azhar in the constitutional committee of 2012. After the overthrow of the elected president, Professor Mohamed Morsi, on the 3rd of July 2013, Al-Shafi’i issued a statement criticising the violence and arrests launched by the new authorities against the opponents. Al-Shafi’i emphasised his refusal of terrorism and stressed his role in combating extremism, announcing his respect for the Egyptian military, but demanded that they withdraw from political life. From then on, Al-Shafi’i was subjected to tight exclusionary measures.

In 2015, Al-Shafi’i was excluded from the new formation of the professional office. The same year witnessed the Dean of Cairo University, Gaber Nassar, known as a puppet for the security agencies, dismiss Al-Shafi’i from his job as a professor in Dar Al-Oloum College. The decision was associated with a media smear campaign attacking Al-Shafi’i as a proxy organ of the Muslim Brotherhood and an advocate of terrorism. In 2020, the State Council nullified Nassar’s decision as a faulty application of the law.

In 2020, Al-Shafi’i won the elections as the Chairman of the Arabic Language Complex with an absolute majority of 27 votes out of 33. However, the Minister of High Education, Khaled Abdel Ghaffar, aborted the election results and appointed the loser, Professor Salah Fadl, who is known to be close to the authorities, instead of Al-Shafi’i, arguing that leadership posts should not be held by the same persons for more than two periods. Abdel Ghaffar used such an argument just after the country’s President amended the constitution to allow him to keep power until 2035.

What happened with Hassan Al-Shafi’i presents an example of the Egyptian authorities’ treatment of independent scholars and public figures who refuse to work according to the security agencies’ instructions.

Even academia is turned into a battlefield. The authorities attempt to control and dominate, persecuting their opponents and depriving them of their jobs, aside from expressing their opinions and publishing their ideas.

The first death from the new Corona virus in Egypt