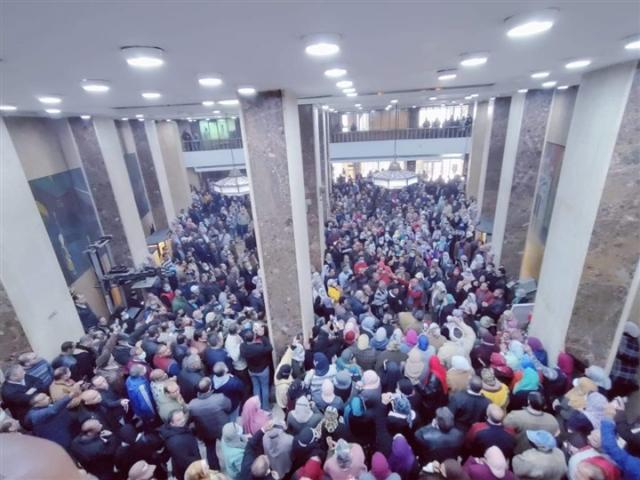 Hundreds of employees belonging to the Egyptian Radio and Television Union Maspero demonstrated for three days protesting their working conditions, the delay in the payment of their financial dues and the corruption that exists within the union.

Several officials, and the National Media Authority, as well as members of the House of Representatives, tried to calm matters and dissuade the employees from demonstrating with promises to discuss their demands, but their attempts failed. Meanwhile, security was tightened outside the Maspero headquarters, for fear of demonstrators taking to the street.

What is happening in Maspero?

The demonstrations began last Sunday, spontaneously, when hundreds of employees piled into the gates of the Radio and Television Union building as they left, due to experiments with the fingerprint system for attendance. This angered the employees, who found this gathering an opportunity to claim their rights and demand money that is owed to them. The demonstrations continued Monday and Tuesday, after taking a more organised form, as employees began to encourage each other, exchanging messages and calls to set dates for the demonstration.

Over the past three days, the demonstrators chanted, “We want our rights,” “Leave, Zain,” “Oh, Zain, where has our money gone.” Demonstrators hold the head of the National Media Authority, Hussein Zain, responsible for the deterioration of their conditions. Maspero workers complained that annual bonuses have completely stopped since 2014, which led to the freezing of employee wages that year, despite the difficult economic conditions the country went through that witnessed a depreciation of the currency by more than 100 per cent, and the consequent historical rise in the level of inflation.

The angry employees also criticised the existence of more than one financial regulation over their wages, which created a disparity between sectors, for example, broadcast engineering, specialised sectors, news, and production managers. The deterioration in living standards of Maspero workers included the cessation of health insurance services due to the union ceasing to pay contributions to the contracting parties, as well as the cessation of disbursement of end-of-service benefits since November 2018.

The employees were working in other jobs, taking advantage of the work system that allows many of them to attend two days per week on average for two to three hours. They were then surprised by Hussein Zain’s decision to set working hours at seven hours per day and for five days per week. The demonstrators believe that the goal of the new decisions is to push the largest possible number of employees in the Radio and Television Union to leave their jobs, which is already happening through the demand of many workers to submit resignations and leave without pay starting last September, when verbal instructions with the same content of the recent decisions began to be issued informally.

Maspero used to have about 45,000 employees, because of administrative slack and the corruption of the era of the late President Hosni Mubarak, but this number has shrunk a lot during the past years. Therefore, many methods are used to put pressure on the employees to force them to resign, including Hussein Zain’s recent decision regarding working hours.

How did the state deal with the Maspero demonstrations?

The National Media Authority were initially in denial about the demonstrations. On January 2, it issued a statement denying the existence of any protests, stressing that what happened was “congestion during the workers’ exit due to experiments with the attendance and departure fingerprint device system.” On the second day of the demonstrations, Al-Watania Media began acknowledging the anger in a veiled form. It issued a statement saying that it is “currently intensifying its negotiations with the Ministry of Finance for the disbursement of employee allowances and hopes to resolve these negotiations to disburse the end-of-service gratuity, promotions, and bonuses, and to resolve the pension crisis.”

In the same statement, the authority indicated the possibility of reversing the recent decisions regarding attendance and departure controls, as it said that what is happening is “a preliminary experience. As for the final controls, we leave it for each sector to determine what it deems appropriate to the nature of its work, after consulting with its employees.”

In anticipation of the demonstrations on the third day, the Maspero building administration poured large amounts of water and soap on the floor of the main lobby of the building, but this did not deter the angry employees. After the demonstrations continued for the third day in a row, the National Media Authority issued a new statement, near midnight, in which it said that “the Ministry of Finance is on the way to provide financial funding to disburse workers’ dues successively within the coming days.”

Several heads of the radio and television sectors tried to calm the employees’ anger and discourage them from participating in the demonstrations, as Doria Sharaf El-Din, Head of the Media and Culture Committee in the House of Representatives, tried to calm the demonstrators, but they refused her intervention and expelled her due to the deterioration of their living conditions during her tenure as office Minister of Information several years ago.

The security intervention was limited in what is happening so far as only one attempt by the security forces to intervene was observed, which occurred during the second day of the demonstrations, when security forces in civilian clothes tried to arrest one of the participants, who was chanting whilst being carried on the shoulders of a colleague at the time, an attempt that failed. It failed because his colleagues defended him and pulled him away from the security forces. Meanwhile, the security presence was tightened outside the Maspero headquarters, for fear of demonstrators would take to the street.

The anger felt by Maspero workers reflects the extent of the deterioration of living conditions in Egypt. The employees, who have long been considered among the solid heart of the state rejecting change and the January 25 revolution because they benefited from the Mubarak regime, were so fed up that they went out to demonstrate and demand their rights. 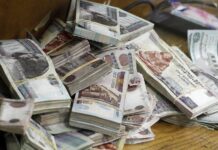 The imminent rapprochement: Egypt and Turkey need each other

What is the future of the USD and the EGP?