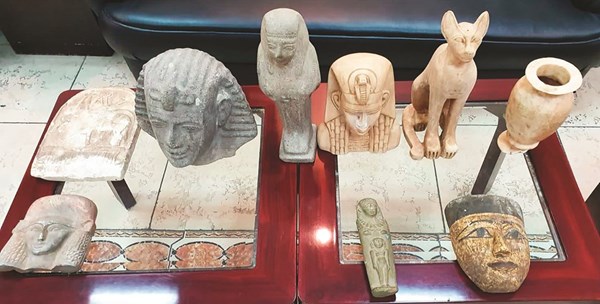 The Cairo Criminal Court has postponed the trial session in the case known in the media as the Antiquities Trafficking Case, in which businessman Hassan Rateb, former parliament member Alaa Hassanein, and 21 others are accused, until February 12, to hear the testimony of witnesses, while the accused continue to be imprisoned.

The prosecution charged the defendants with forming a gang to trade in antiquities, financing excavations, and possessing a large number of antiquities in preparation for selling and smuggling them outside the country. While speaking before the court, Rateb asked for a secret session, saying: “There are two important things that should not be publicly disclosed in order to preserve the national security of the country.” Hassanein said that he would like to talk about important things related to Egyptian national security, adding: “We have serious information about the role of the security in this case, so we want to hold a secret session.”

According to sources familiar with the investigations, Rateb said that the antiquities left Egypt with the knowledge of official bodies and entered the UAE with the knowledge of official bodies, and that his role was no more than a mediator. Press reports had reported that the name of the UAE ambassador to Cairo, Hamad Saeed Al Shamsi, had been mentioned in the case papers, in addition to prominent Egyptian military leaders. The sources also indicated that the visit of the Saudi Foreign Minister, Faisal bin Farhan, to Cairo last month, to attend the meetings of the Egyptian-Saudi Joint Committee, had touched upon the details of the case. The sources pointed out that the Saudi minister came to Cairo carrying an important message regarding the involvement of three Saudi personalities in the case.

The Sixteenth Circuit of the Cairo Criminal Court had withdrawn from hearing the case and referred it to the Court of Appeal. Prosecution investigations concluded that Rateb had financed the defendants with an amount of EGP 50 million over five years to excavate antiquities. The prosecution also said that he provided them with the equipment used in this, and earned millions of pounds, taking advantage of his possession of a foreign nationality to smuggle antiquities and sell them abroad.

Air traffic in Egypt suspended until end of March