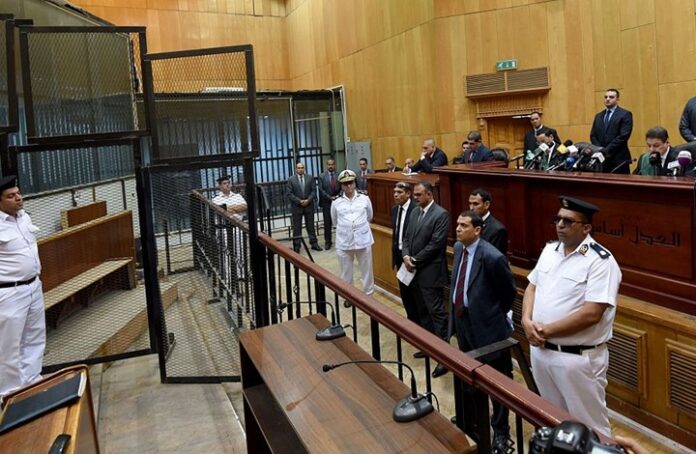 After two and a half years of investigations, the Attorney General of Helwan College Prosecutions referred the former head of investigations at the Helwan Police Department, Colonel Hani Abu Alam (imprisoned), and his former assistant police secretary Hani Heikal (fugitive), to the Cairo Criminal Court, on charges of severely beating leaded to death citizen Walid Abdel Azim and the use of cruelty with him, while he was detained inside Helwan Police Station in 2019.

Good move, of course. It took a long time, but late is better than never. The dilemma here is in the legal qualification of the crime. Instead of accusing the two policemen of “torture leading to death,” which guarantees them a severe punishment, they were accused of “beating leading to death and the use of cruelty,” which guarantees them a reduced sentence that neither achieves justice in society nor it deters others from committing such a heinous crime.

The reason for this is the inadequate legal definition of the crime of torture, which sets very limited conditions for it, allowing many to escape punishment. In order to protect his men, the regime of President Abdel Fattah al-Sisi refuses to amend the law, and even pursues with full force those who seek to amend it.

The incident dates back to June 2019, when the citizen Walid Abdel Azim, who works as a driver for the Public Transport Authority, was arrested, under the pretext of “investigating him” for insulting a police officer during a patrol of the Helwan Police Department.During the interrogation of Walid by the chief of investigations and his assistant, he was tied from behind and beaten and kicked until he breathed his last inside the station during the first 24 hours of detention.

Amr Mohamed, Walid’s family lawyer, confirmed in press statements that the department’s cameras showed that the victim had entered intact and was led on his feet, and the forensic report stated that he had been assaulted. For two and a half years, the Public Prosecution stalled in completing the investigations into the case, and was stubborn in providing the victim’s family’s lawyer with an official copy of the case’s papers, and did not even order the pretrial detention of the accused in the case, given their power to change the course of the investigations.

According to the lawyer for Walid’s family, the accused remained at work and were not arrested, and “during the investigation period, the first accused (the chief of investigations) was promoted to the rank of colonel, and during the period from June 2019 to December 2021, the prosecution contented itself with issuing summons to the accused only, and did not order their arrest, bringing them and imprisoning them. The case is pending, except last December, when the Public Prosecution ordered the detention of Abu Alam for four days pending investigations after carrying out his arrest and bringing him, and then ordered his detention for 15 days, which was renewed twice, until the decision to refer him to felonies was issued last Sunday, while the second accused is still on the run. .

The victim’s family suffered greatly, as the investigation period was deprived of the payment of his pension because the cause of the death certificate was under investigation, which prevented the insurance company from paying the victim’s pension to his family. Regarding the punishment awaiting the defendants, “Mohammed” says that it ranges from 3 to 7 years in prison for beatings leading to death, and one year for the use of cruelty, and exclusion from employment if a ruling is issued against them.

A minor definition of the crime of torture

Article 52 of the Egyptian Constitution states that “torture in all its forms and manifestations is a crime without statute of limitations.” It is also criminalized by the Convention against Torture and Other Cruel, Inhuman or Degrading Treatment or Punishment, which Egypt has ratified. The Convention defines torture as: “any act by which severe pain or suffering, whether physical or mental, is intentionally inflicted on a person with the intent to obtain from that person, or from a third person, information or a confession, or to punish him for an act he has committed or is suspected of having committed.” committed by, or by a third person, or intimidating or coercing him or any third person – or when such pain or suffering is inflicted on a person, for any reason based on discrimination of any kind, or at the instigation, approval or acquiescence of a public official or any other another person acting in an official capacity. This does not include pain or suffering arising solely from, necessary or incidental to, lawful sanctions.”

As for the Egyptian law, it sets a different definition of torture, as it states that “every public official or employee who ordered the torture of an accused person or did it himself in order to force him to confess,” and in this case the penalty is “rigorous imprisonment or imprisonment from three to ten years. If the victim dies shall be sentenced to the penalty prescribed for premeditated murder.

The meaning of this text is that the public official or employee does not commit the crime of torture unless the victim is an accused, and only if the assault on him is from the public official or employee with the intention of obtaining a confession. If these two conditions are not met, the public official is not brought to trial for torture. That is, if a public official continuously detains and beats an accused with the aim of intimidating or punishing, for example, this act does not fall under the definition of torture under Article 126. This sterile provision has led to the impunity of dozens of policemen in particular for the crimes of torture they committed. In the worst case, if they are tried, they are accused of “beating leading to death”, a crime that carries a sentence of only 3 to 7 years.

For example, in December 2019, the Cairo Criminal Court sentenced an officer and 8 policemen in Waili Police Department to 3 years in prison, on charges of beating Hussein Farghali to death and using cruelty to him. In November 2018, the Cairo Criminal Court sentenced a police officer with the rank of captain to 3 years in prison, and 6 months to a police secretary, on charges of beating the citizen Mohamed Abdel Hakim, known as “Afroto,” to death. Thus, the law became a means of evading the accused from deterrent punishment; until the crime of torture was committed without fear or apprehension, reassuring that justice will not be truly served. The reason for the persistence of such deficient legal definitions is the regime of President Abdel Fattah El-Sisi, who has been deaf to the calls and human rights demands that have been going on for years to reform the legal texts that impede the achievement of justice in torture crimes.

The regime was not satisfied with complicity in the crimes of torture, but even prosecuted human rights defenders for preparing a draft law against torture! Since 2015, and over the years, prominent human rights lawyer Nejad Al-Borai, and judges Assem Abdel-Jabbar and Hisham Raouf have been prosecuted for sending a draft anti-torture law to the Presidency of the Republic. These facts confirm, beyond a reasonable doubt, that the Sisi regime deliberately maintains the sterile legal text on torture in place, in order to always allow its men to escape punishment.