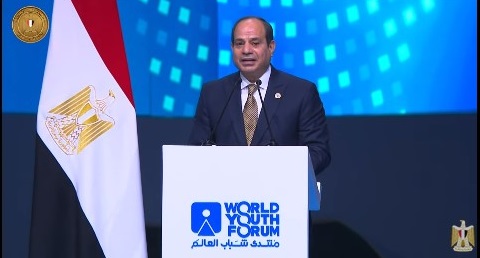 Between 10 and 13 January, the fourth conviction of the World Youth Forum was held in Sharm al-Sheikh of Egypt with heavy media coverage by Egypt’s local media that celebrated the event, which is sponsored by Abdel Fattah al-Sisi. The lustrous Spanish actress, Itziar Ituño, Raquel Murillo of Netflix most popular and critically acclaimed drama Money Heist, inaugurated the forum with the Italian revolutionary folk song Bella Ciao played in the background. The scene briefed the significance of the forum and the propaganda aura around it, woke washing of Egypt’s general and his military regime.

In 2015, Abdel Fattah al-Sisi founded the National Youth Conference, reviving a tradition of replacing liberal democracy with allegedly direct democracy system of conferences, whereas the ruler dialogues with the citizens face to face. The tradition was founded during Nasserite Egypt in the 50s and 60s and found its full application in Muammar Gaddafi’s Libya and Hassan Turabi’s Islamist Sudan in 90s. Bluff nature of such conferences stands to reason for the people who experienced it and knew the fabricated agenda and filtered audience features, but the conferences are of use as a response to the harsh criticism the dictator faces in Europe due to his absolute authoritarianism. However, Sisi knew he needs a more convincing propaganda. Here, came the idea of disguising Sisi’s tyranny with false adoption of the new progressive values of anti-racism, gender equality, green policies and cultural diversity.

In 2017, WYF was established as NGOs’ initiative sponsored by Sisi. Barefacedly, the regime claimed it sponsors NGOs platform in a country the UN Human Rights Council repeatedly warned of the deteriorating civil society status in it up to eradication. Ironically, Sisi concluded the forum this year by declaring 2022 a year for civil society in parallel with the declaration of the Arab Network of Human Rights Information, one of the most deep-rooted, wide-scope and widespread civil society organizations in Egypt, cessation of its activities due to the Egyptian authorities’ pressures, threats and violations against the network and its staff topped by the outstanding lawyer Gamal Eid, who was subjected to assaults by the police’s rogues.

While Abdel Fattah al-Sisi is celebrating youth in his forum, thousands of Egyptian youth are left to rot in his prisons for years. This year, the forum was preceded and followed by flagrant violations against youth. Less than a months before the forum, there was the sentence against 3 notable activists, blogger Alaa Abdel Fattah, human rights lawyer Mohamed al-Baqer and blogger Mohamed Oxygen, to imprisonment on charges of circulating anti-state rumors.  One day after it, a surprise landing of Sudanese passenger flight destining Turkey in Luxor concluded in arresting of a young Egyptian journalist remembering the arrest of Belarusian blogger Roman Protasevich.

Ostensible championing of progressive tenets did not prevent Abdel Fattah al-Sisi of eliminating public and private freedoms in Egypt. Dozens of journalists were arrested or interrogated over publishing just news that contradicts with the regime’s propaganda. One week ago, Egyptian outstanding journalist Khaled Balshi was summoned by the prosecution because he published a report on the violations of the parliamentary elections in 2019. Those who attend WYF or follow it on media have to know that violating freedoms and assaulting citizens in Egypt up to torture is a daily practice the regime itself does not deny, and its president, al-Sisi, justified it in the forum by Egypt’s own conditions.