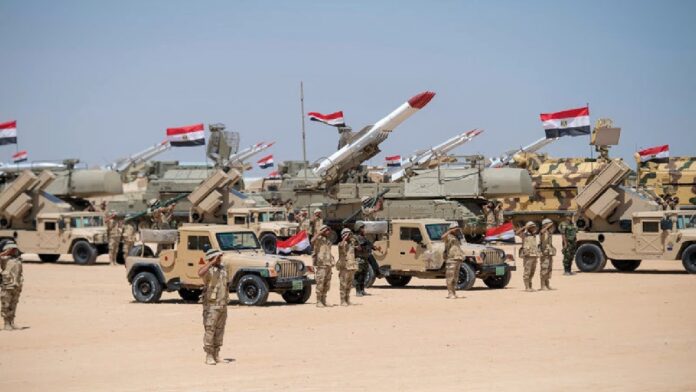 Egypt ranked seventh out of the 21 countries that topped the 2021 Arms Sale Risk Index, issued by the Cato Institute.

The index measures factors associated with negative outcomes of arms sales, such as dispersal, diversion, and abuse by recipients. The criteria includes the level of corruption in the arms-purchasing country, its stability, its treatment of its people, and the level of internal and external conflict in which it is involved.

According to the results of the 2020 index, Syria topped the world with the highest level of arms sales risk, with a total of 96 points out of 100. It was followed by Yemen with 96 points, then Somalia with 91 points, then Iraq, Libya, and Sudan with 89 points each, then Egypt with 78 points.

The German Economy Ministry issued a report saying that Egypt ranked first in the countries importing arms from Germany last year. The report said that the total value of German arms exports last year amounted to 9.35 billion euros, an unprecedented value. An increase of 61 per cent compared to 2020, it exceeds the previous record of 8 billion euros in 2019.

Egypt imported German weapons worth about 4.3 billion euros, ranking first in the list of German arms importers, far ahead of the United States, which came second with a total of 1.01 billion euros, according to the report. In the last days of the former German government led by Angela Merkel, the Egyptian government signed arms import contracts for nearly half of Germany’s arms exports.

German politician Omid Nouripour, who is considered a promising candidate for the presidency of the Green Party at the end of this month, has called for stopping the export of German weapons to Egypt and Saudi Arabia. “There should be no German arms exports to Egypt and Saudi Arabia due to the problematic policies of both countries,” Nouripour told dpa, referring to the two countries’ participation in the Yemen war.

The German politician indicated that there are more than 60,000 political prisoners in Egypt, adding that in the Libyan conflict, Egypt has repeatedly violated the agreements of the international community. Nouripour confirmed that there has been an arms export embargo against Saudi Arabia in effect since November 2018, and the main reason is the country’s participation in the Yemen war.