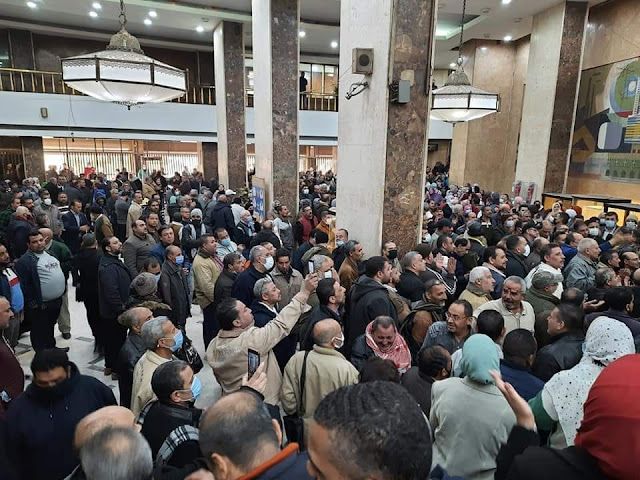 The head of the Trade Union Committee for Employees in the Economic Sector in the National Media Authority, Khaled Al-Sobki, said that a sovereign body asked him to stop the demonstration that has been going on for three weeks in the lobby of the Maspero building.

The body made it clear to him that the protests were being politically exploited by Muslim Brotherhood television channels. Thus, Al-Sobki pledged, in return, that the demonstrations would carry pictures of President Abdel-Fattah Al-Sisi and Egyptian flags to avoid politicisation, which the sovereign body accepted.

Al-Sobki added that he asked his colleagues to stop the demonstrations for one day, Tuesday 25 January, the eleventh anniversary of the revolution, to avoid politicising the demands of the workers.

The sovereign body requested the details of the workers’ demands written in an official request, according to Al-Sobki. The protests began three weeks ago as thousands of employees demonstrated against their poor working conditions and low wages, the suspension of bonuses and promotions for years, and the suspension of health insurance services. They also demanded that they receive their financial dues, which have been in arrears since 2017, and the departure of the head of the National Media Authority.

Less than two weeks ago, the National Media Authority announced the cabinet’s approval of disbursing EGP 60 million to pay employees’ dues, which are far less than the total arrears of about EGP two billion.

New round of Renaissance Dam negotiations in Addis Ababa

Nadeem Center: 103 cases of human rights violation in Egypt during...